Muscadine wines are a bit misunderstood. But why? As we delved into one of America’s true native wine grapes, we realized that Muscadine grapes (including Scuppernongs) are uniquely amazing, desired for their incredible super fruit properties, but they suffer from some image problems.

“It has that hill-billy-red-neck-cheap-wine-get-drunk persona.”
-Greg Ison, Muscadine Expert, Ison’s Nursery and Vineyards

Muscadine is a species of grape called Vitis rotundifolia, which is native to the Southeastern United States. Several different cultivars of Muscadine grapes range in color from green to black and typically have large berries (sometimes as big as a golf ball).

It is supposed that there are about 3,200 acres of Muscadines planted throughout the Southeastern United States, mainly in Georgia, North Carolina, South Carolina, Mississippi, and Florida.

Muscadine grapes might be the most super of superfruits. Muscadine grapes have high levels of polyphenols (antioxidants), resveratrol, and ellagic acid. In a recent study with Neil Shay at Oregon State University showed that ellagic acid in Muscadine wine targeted conditions related to obesity, including reducing fatty liver (read more about that here). By the way, no other wine grape produces ellagic acid. 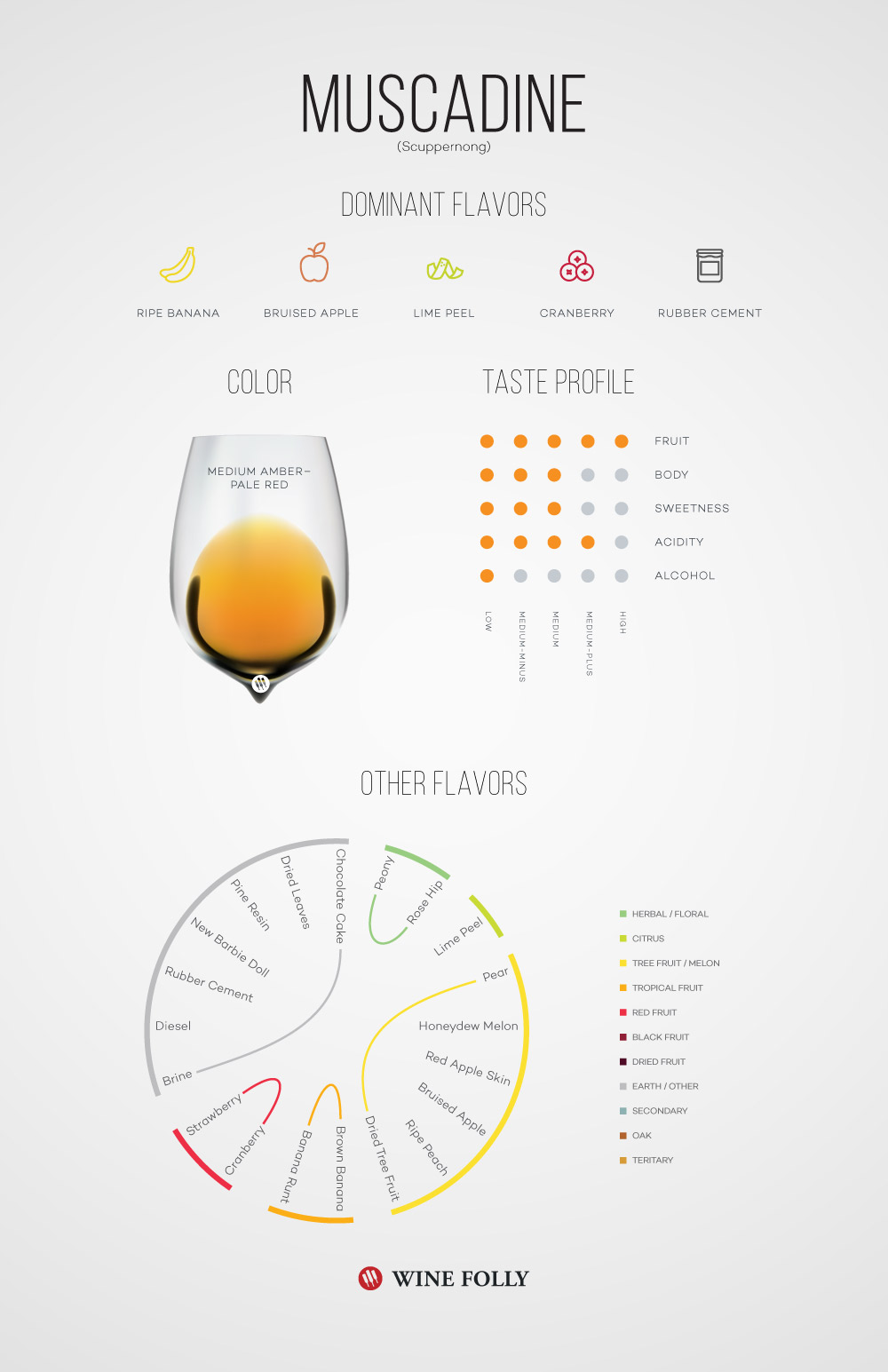 Wines have very intense aromas of ripe/brown bananas with subtle notes of lime, honeydew melon, or cranberry (depending on if the wine is red or white). Some of the wines we tasted gave off a rubber cement smell where others offered a more pine resin-like note.

On the palate, the wines range from dry to sweet with a medium body, medium-plus acidity and intense flavors of banana or rubber cement and more subtle notes of lime, peony, honeysuckle (for whites) or strawberry and cranberry (for reds). The astringency is present towards the middle-back of the taste and felt subtly around the sides of the mouth. The finish is medium-long with saline and pine cone notes or notes of rubber cement and sweetish dried fruit.

Aging? Wines oxidize quickly and are best drunk young.
Serving: Serve and store chilled (both reds and whites).
Quality: Because of limited production in the South, quality wines are hard to source.

*For the tasting notes described above, we tasted a range of styles from Duplin and Wood Mill Winery.

Muscadines are a fascinating native species to North America. Wines from this grape are in their infancy, and their exploration has just begun. Since Muscadine grapes are not a high-value crop (a ton sells for a mere $300–$400 a ton, compared to >$2000 a ton for Pinot Noir), it’s hard to justify the research and development needed to craft a new identity of Muscadine, but people are trying. For example, instead of adding sugar to the fermentation and making a sweet wine, producers might embrace lower sugar levels and experiment with kombucha. Either way, we’re keeping our eyes open for someone to come along and find the right way to express this grape.