Nebbiolo (“Nebby-oh-low”) is a full-bodied red wine more famously known by the two production regions of Barolo and Barbaresco in Piedmont, Italy. Nebbiolo wines are translucent (like Pinot!) and have a delicate smell, but when you taste them you are greeted with robust tannin and high acidity. Find out about Nebbiolo and several regions in Northern Italy that make this fascinating, almost deceptive-tasting wine. 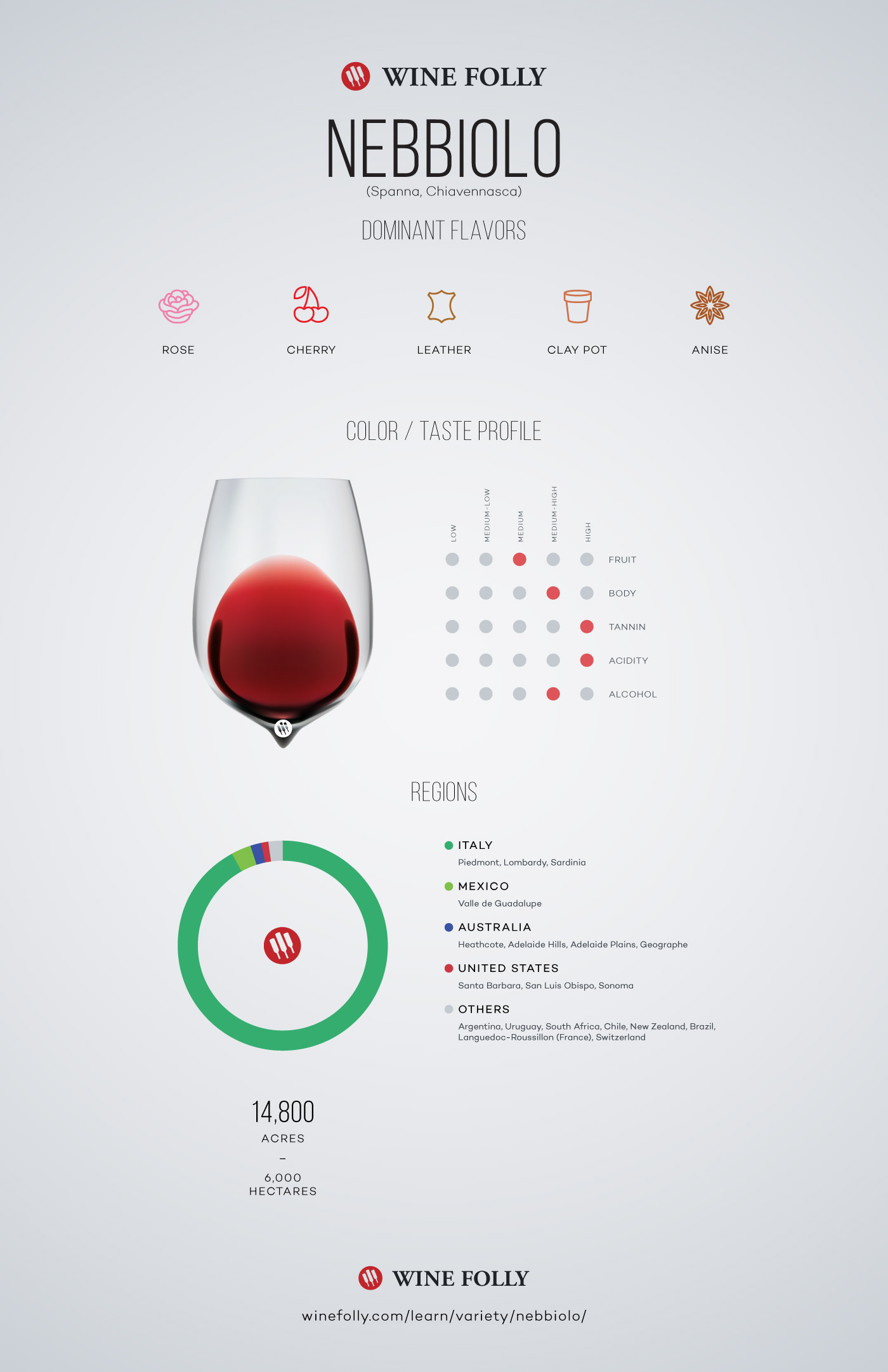 Detailed tasting descriptions of Nebbiolo wines on Page 142 of Wine Folly: The Essential Guide to Wine

The Taste of Nebbiolo Wine

Tasting Nebbiolo wines can be quite an arresting experience because the floral and light red fruit aromas suggest the wine is much lighter than it is. Upon tasting Nebbiolo you will experience leathery, gripping high tannin (depending on the style, see below!) that seems to clasp the inside of your lips to the front of your teeth. Despite its tannic structure, the wine’s fruity flavors of cherry and raspberries, supported with aromas of rose and anise, always seem to shine through. In cooler years, Nebbiolo gets a bit herbaceous with more sour cranberry fruit, rose hip and leather and red clay minerality.

Nebbiolo is a thinking person’s wine: subtle yet bold, simple yet complex…

You’ll like Nebbiolo if… you like fine Sangiovese or are into cool-climate Pinot Noir. Nebbiolo is a wine that you need to taste, without a doubt.

Decant? Decant for 45 minutes to 2 hours

Delicate aromatics of leeks with truffle in a rich risotto. By Ulterior Epicure

With Nebbiolo’s delicate aromas but bold tannin, you’ll want to seek out less-gamey meats that have enough fat to absorb the ample tannin. The wine’s high acidity gives it the opportunity to match against higher acid foods with saltiness and perhaps vinaigrette-based sauces, but remember to balance by adding enough butter, fat or olive oil to compliment the wine’s tannin.

Even though Nebbiolo is traditionally paired with Italian foods, it has been well-received alongside Asian cuisine with brown sauces and Asian 5-spices sauces. 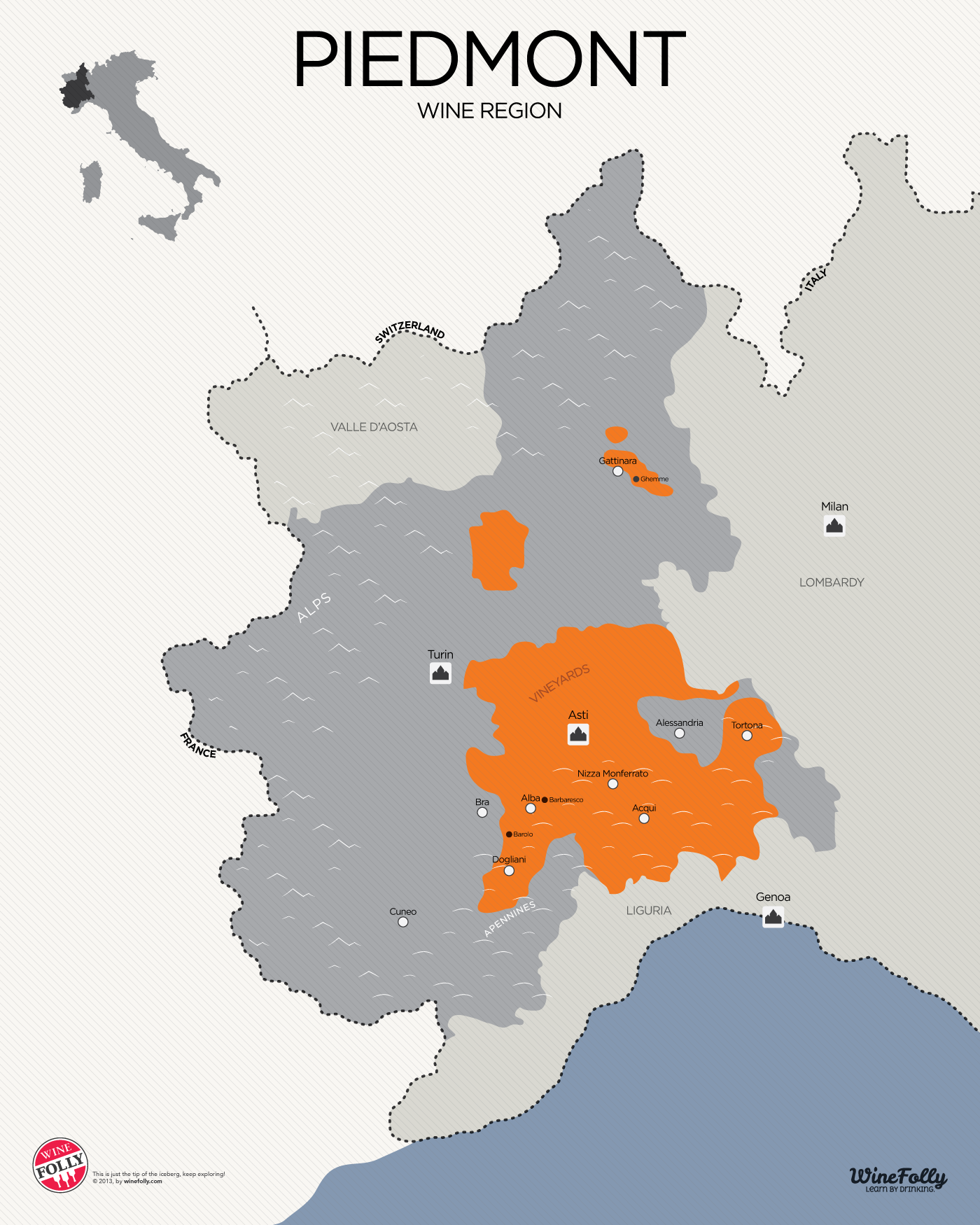 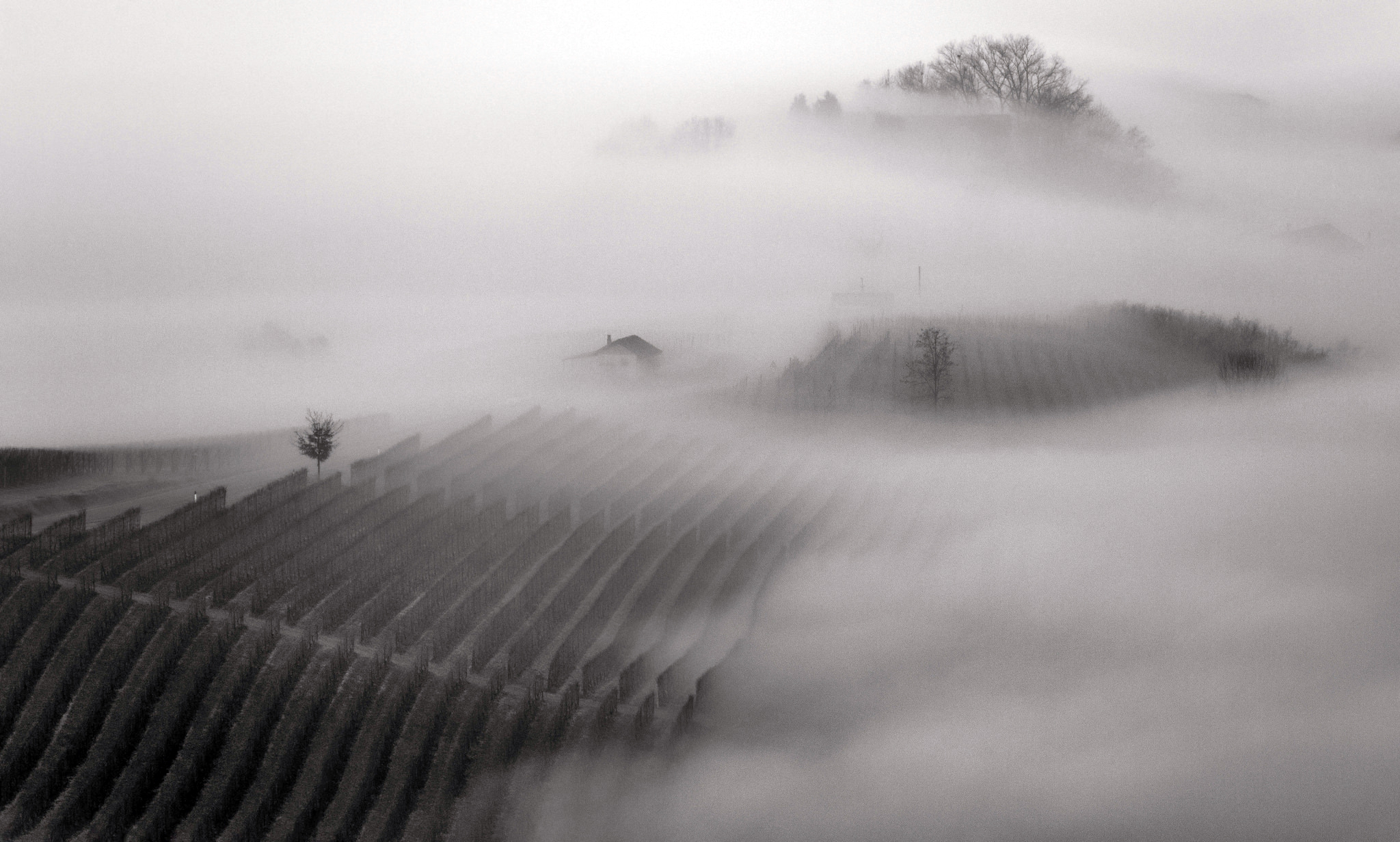 The rolling hills in the Langhe are covered with fog in the morning. Thus, the best vineyards on the tops of the hills are reserved for Nebbiolo and the lower vineyards are typically used for Dolcetto and Barbera. By Fulvio Spada

Containing the regions of Barolo, Barbaresco and Roero is the Langhe (“long-gay”). The Langhe region contains both valleys and hills with a variety of soil types and altitudes. This generally tells us that the wines from the Langhe can be variable depending on who makes it–and can be potentially quite good. What is important to note is that the lower slopes and valleys collect fog in the morning which isn’t ideal for slow-ripening Nebbiolo grapes. Still, on excellent vintages (2010, 2012 and 2015 for example), you’ll be able to find fantastic Nebbiolo wines from this region for outstanding prices. 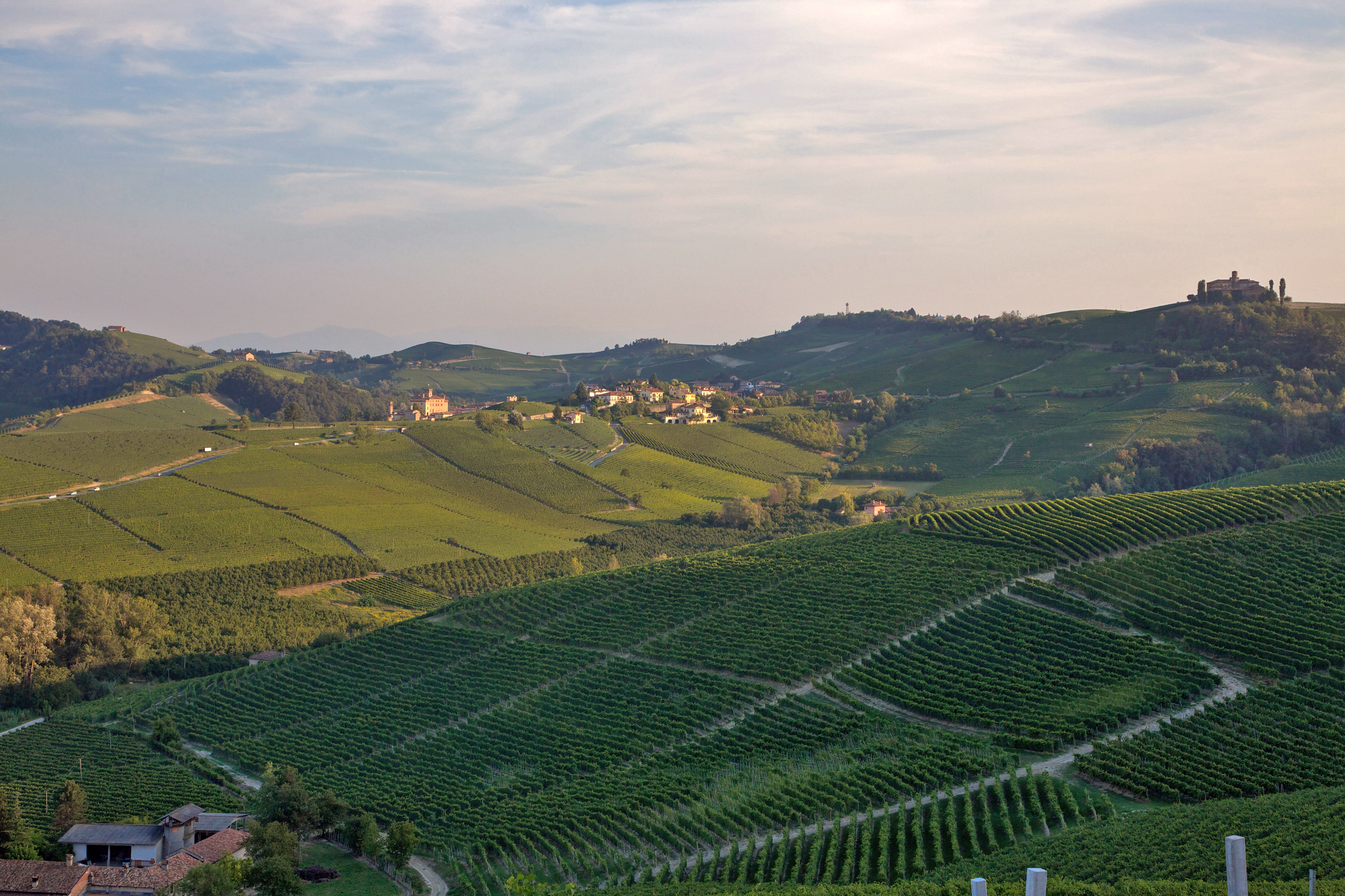 The villages of Barolo and Barbaresco produce the most famous Nebbiolo wines in the world. The reason for this is their position high above the fog which produces wines with both bold fruit flavors, high tannin and higher potential alcohol. The result is a wine bold with aromas of cherries, fruitcake, clove and anise that is equally intense to taste.

This little known region is just north of Barolo within the Langhe. High quality examples from Roero (“row-air-oh”) exhibit brooding aromas of raspberry, anise, rose and clove. On the palate, you’ll find Roero Nebbiolo to be a little more approachable than Barolo and even Barbaresco with reduced tannins. Just so you know, the Roero Rosso DOCG must be 95% Nebbiolo with 20 months of aging (at least 6 in oak). The Riserva level tends to be even softer with 32 months of aging (6 months in oak/wood). 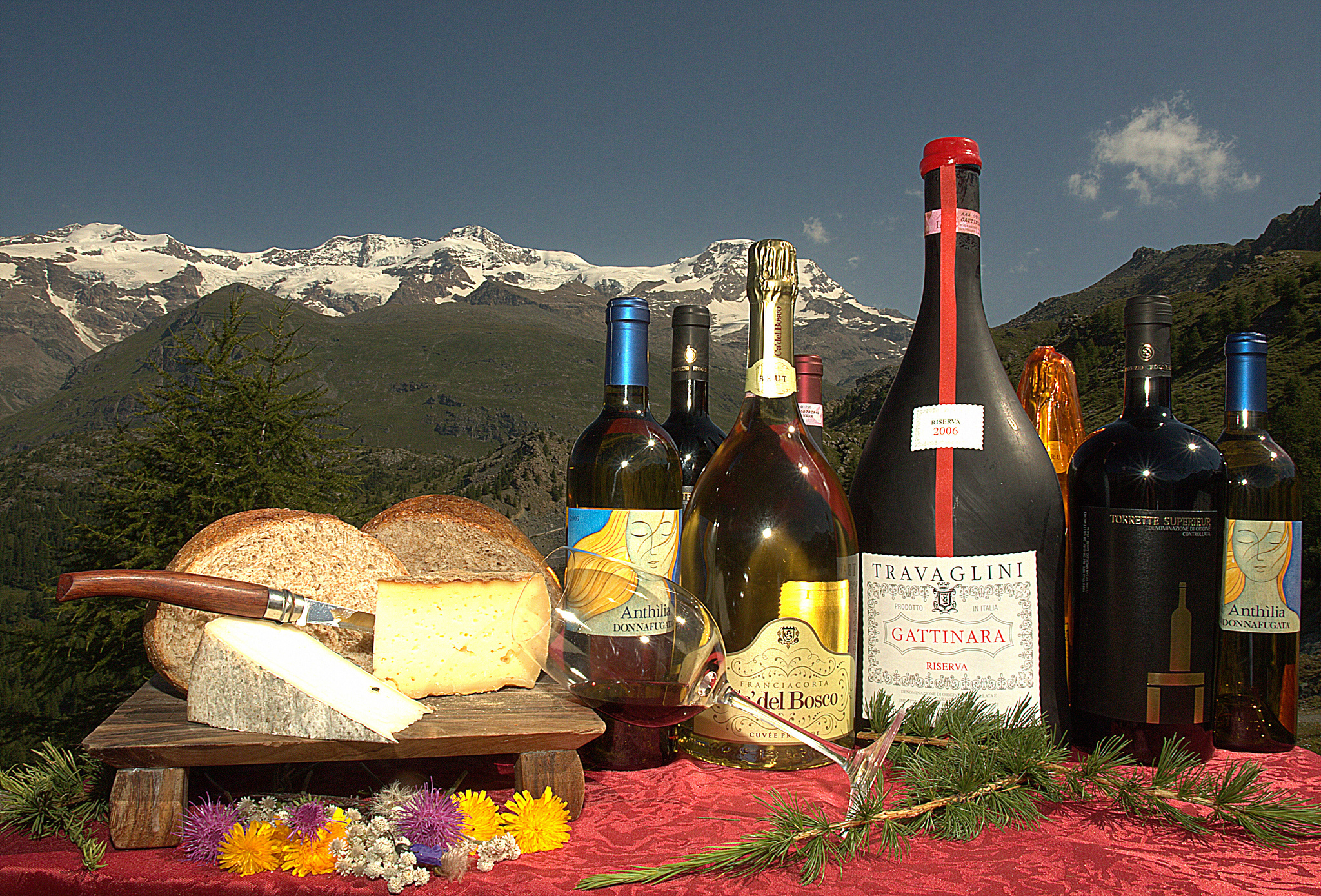 The old style of Gattinara bottle. By Roberto Cilenti

In the northern part of Piedmont, heading into the Alps and Aosta Valley, are two cities that straddle the Sesia River–Ghemme on the eastside and Gattinara on the westside. The wines from up north take on a much lighter taste profile and could be likened more to red Burgundy (French Pinot Noir). The wines are floral with high acidity, delicate tart red fruits and earthy soil notes. Early on the wines can be quite herbaceous to taste, but with extended aging they take on an ethereal quality. The best vineyards in Ghemme lie on low, east-facing hills and the best vineyards in Gattinara climb up the steep foothills of the Alps and face southeast.

TIP: Nebbiolo is called Spanna in the Novara province. 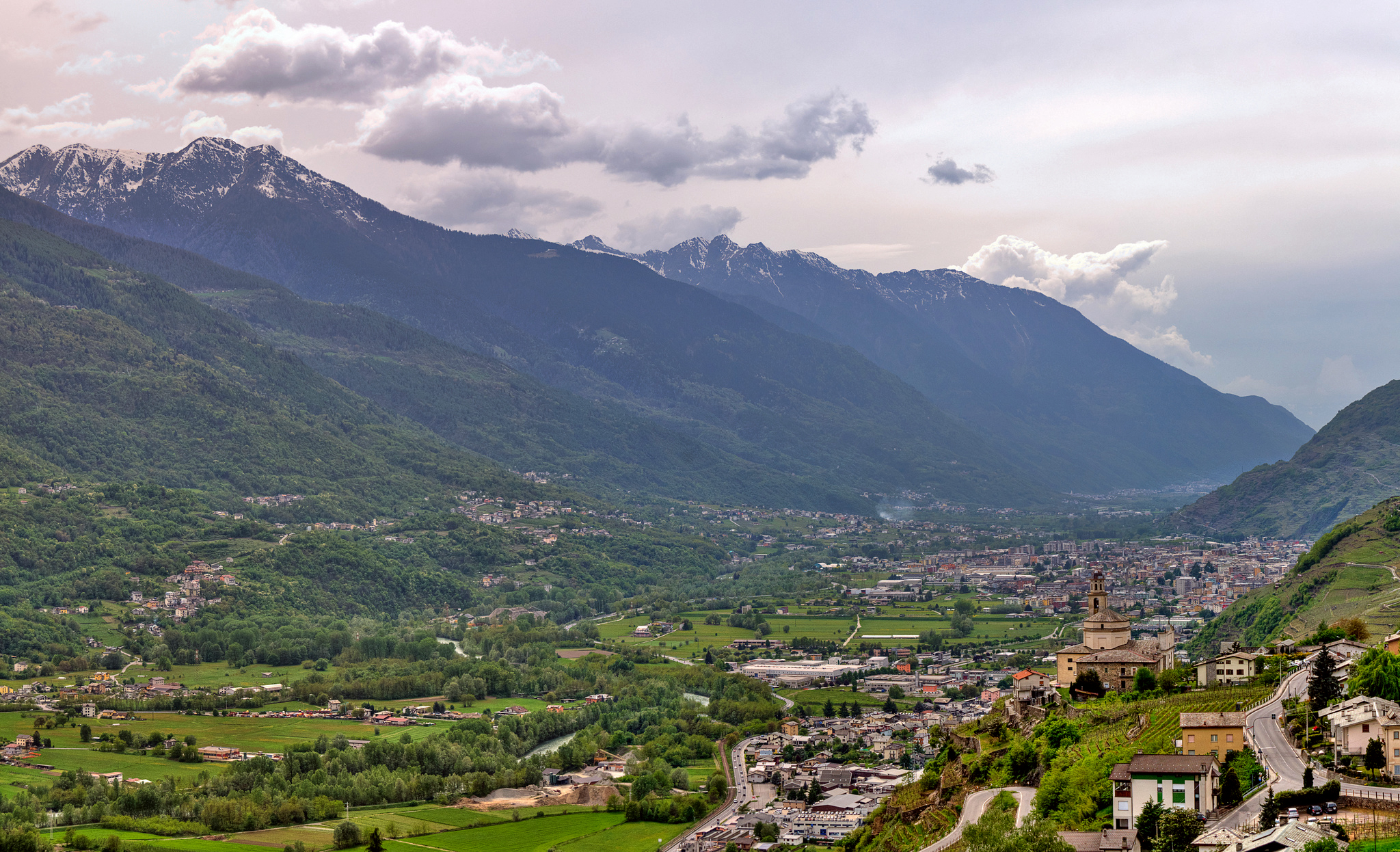 The valley runs east-to-west and opens into Lake Como. The best vineyards are on terraced slopes facing south. by AHT

In the Lombardy region, Nebbiolo grows in an east-to-west oriented alpine valley, Sondrio, that opens to Lake Como. The Nebbiolo creeps up the southern facing slopes and produces some of the most elegant and floral styles of this wine. Expect very pale color and aromas of roses and red fruits with more subtle tannin and leather notes. The region also produces a Nebbiolo wine, made with the same technique as Amarone (appassimento), called Sforzato (Sfursat) di Valtellina. 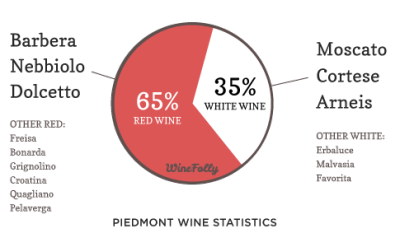