Mendoza Malbec is a hallmark of South American wine, and its growing reputation has only had two decades to gather steam. The sudden rise of its importance and availability is thanks to its quality from the cheapest to most expensive versions, sassy flavors, and rich history.

Dip into our guide on Mastering Mendoza Malbec to learn about your new favorite South American wine.

Let’s break down the details of Malbec from Mendoza to understand better how to find great quality wines. 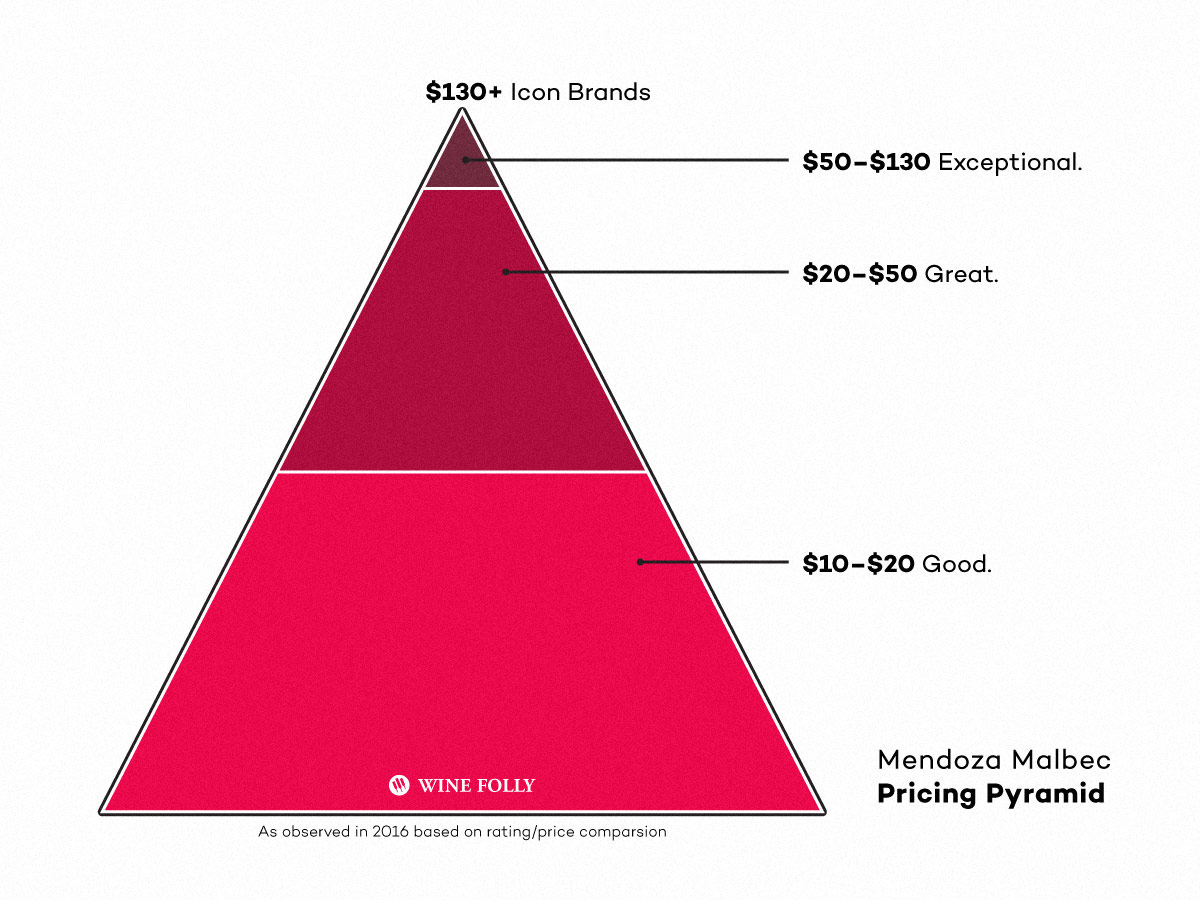 There are three unofficial quality tiers of Mendoza Malbec based on price. While outliers do exist (overpriced introductory wines or underpriced superior quality wines), for the most part, you’ll find this a consistent pricing structure. 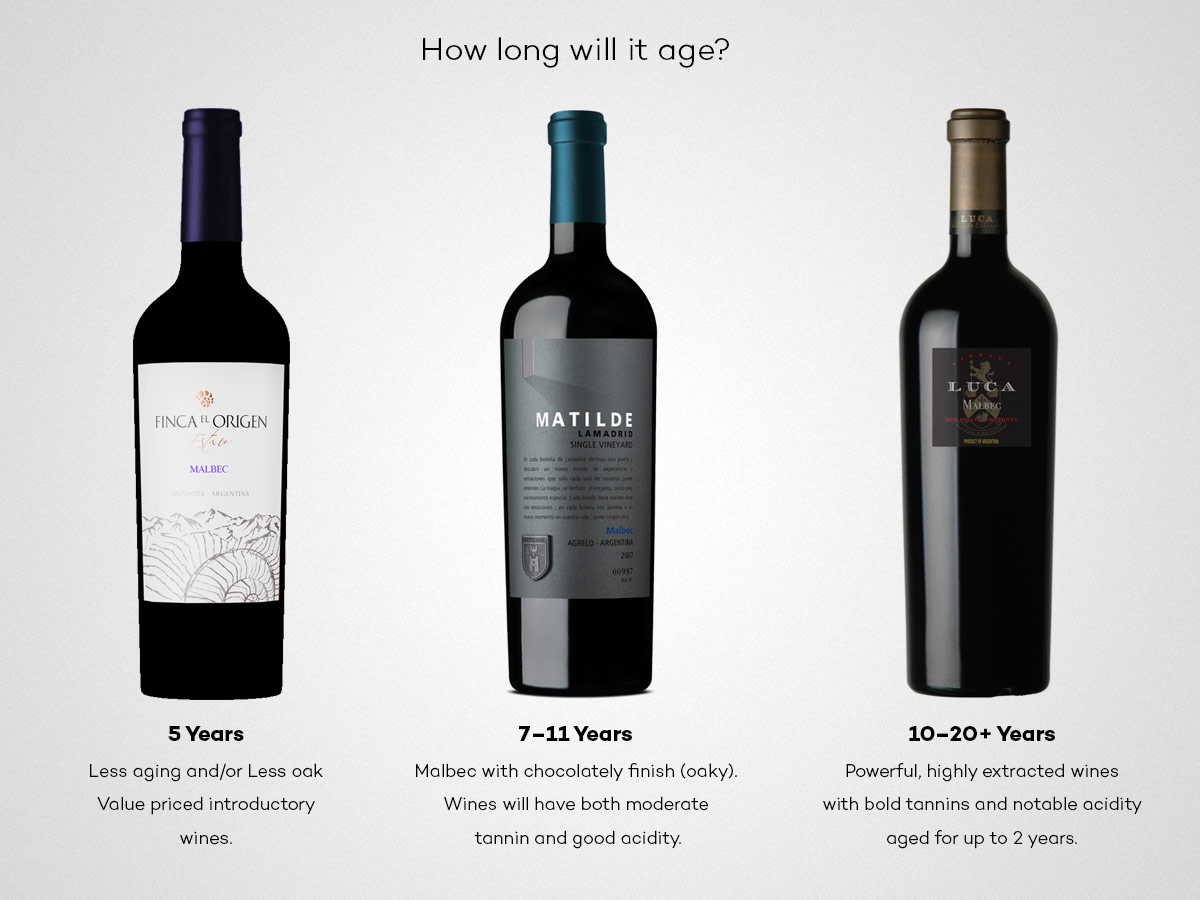 How long will Mendoza Malbec age?

Now that Argentine Malbec has garnered top scores from critics, many of us who love the stuff want to add it to our cellars. But, that raises a fundamental question: if these wines improve with age, are they likely to return on investment?

To answer this question, we scoured hundreds of reviews from WS, WE, JS, and WA. Here’s what we found: 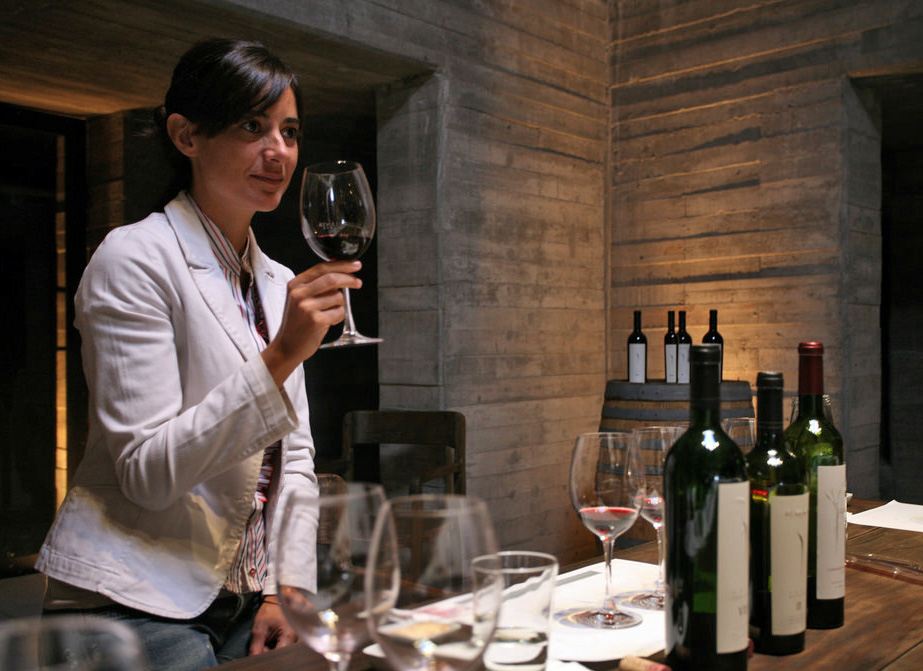 A comparative tasting at Pulenta Estate, whose wines are manually harvested. Photo by Mark Surman.

Mendoza is a large province (nearly the size of Illinois) that is home to 75% of Argentina’s vineyards, and Malbec is the region’s most celebrated grape. Of course, this wasn’t always the case.

Malbec’s rise to international fame began in the early 2000s when the country’s political and economic situation stabilized long enough for the wineries to begin investing in improvements once again. Since the 2005 vintage, several producers have garnered top scores for their Malbec wines. So, suffice it to say, Mendoza Malbec isn’t just pleasant mid-week drinking wine, it’s serious business. Let’s look at some of the sub-regions that influence this wine. 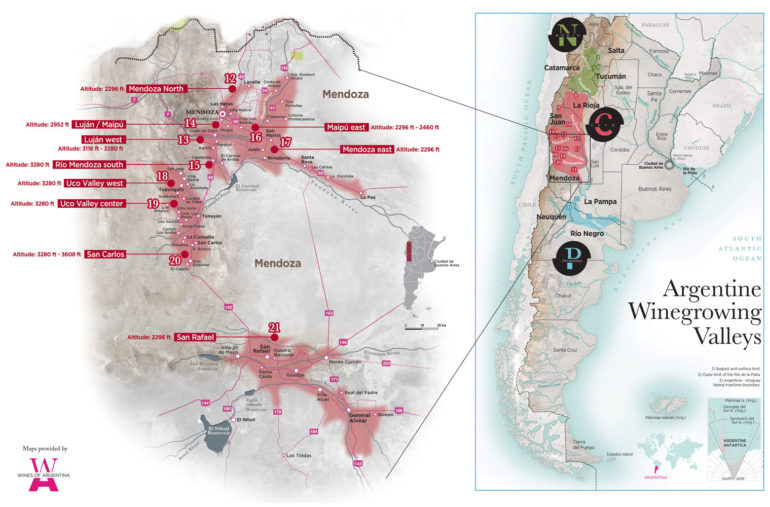 If you’re curious to know more, you can gain lots of confidence by studying the differences in the wines from Mendoza’s sub-regions, including Maipú, Luyán de Cuyo, San Raphael, and East Mendoza.

The province’s most historic wine region is just south of Mendoza city. Here, you’ll find historic Bodega Lopez as well as the well-known Pascual Toso and Trapiche wineries. For the most part, Malbec wines from Maipú offer red fruit (red currant, pomegranate, boysenberry, red plum, and cherry) flavors with a touch of earthy cedar or tobacco.

An area called Barrancas, which is slightly warmer than the surrounding Maipú, is noted for producing wines with darker fruit flavors and softer acidity, which is true of its Malbec, Cabernet Sauvignon, and meaty Syrah. 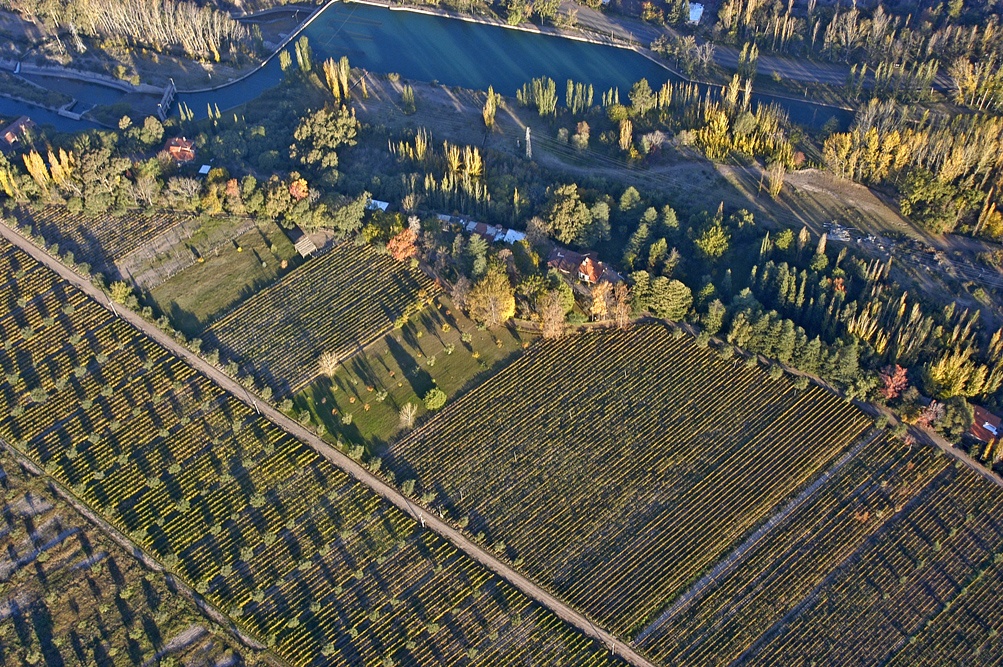 A view over Luján de Cuyo and the Mendoza River directly south of Bodega Kaiken. Photo by Carlos Calise.

Luján de Cuyo contains many ultra-modern wineries and some of the region’s most glamorous boutique hotels. It is home to the game-changing producer Catena Zapata as well as dozens of other exceptional wineries, including Achaval-Ferrer, Bodegas Norton, Viña Cobos, Bodega Vistalba, Durigutti, etc.

Within the Luján de Cuyo region, wines often have labels for the nearest town. As you taste these wines, you’ll start to notice how certain areas within Cuyo feel subtly different, given the different terroirs at play. Of the sub-regions, Agrelo (elegance + power), Vistalba (minerality), Las Compuertas (elegance), and Perdriel (tannin) offer some of the most distinguishable differences. 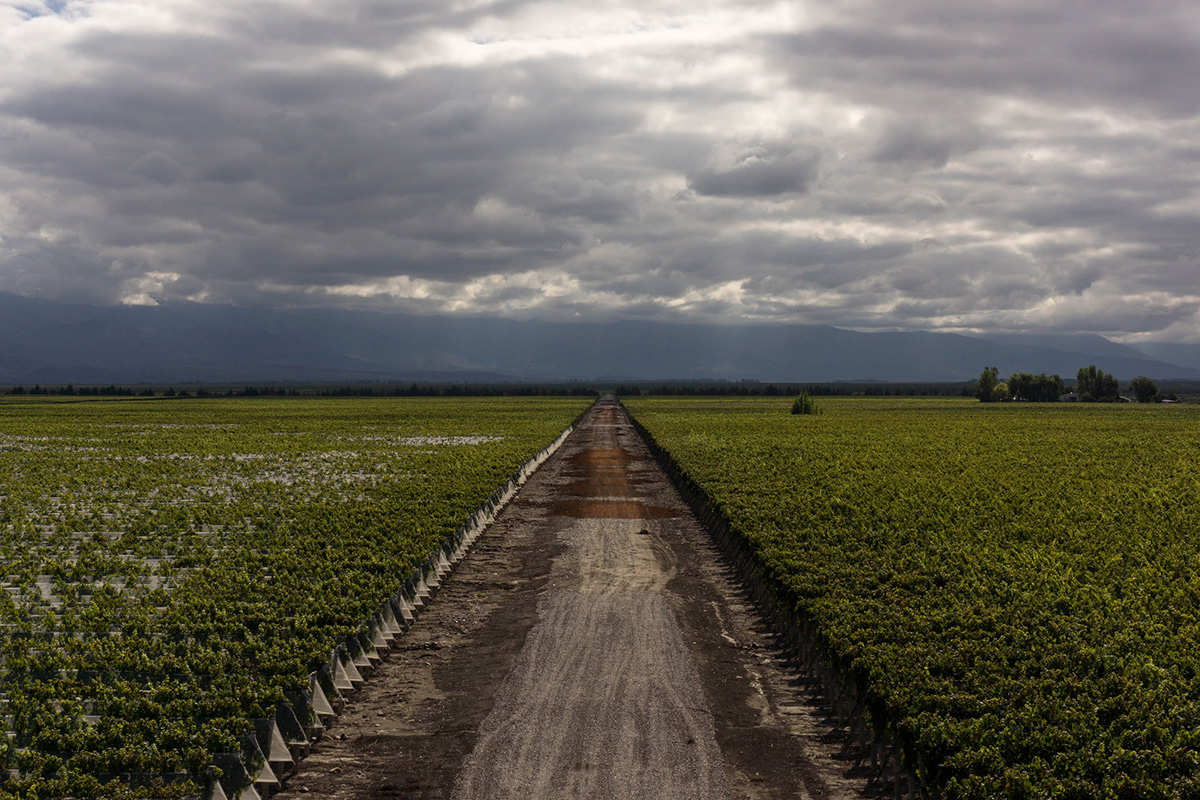 Uco Valley is the highest in elevation and the closest to the Andes Mountains. Photo by Danicho.

With some of the highest elevation vineyards of all of Mendoza, the Uco Valley (or Valle de Uco) is known for producing wines with elegance and excellent aging potential. This region has attracted producers from all over the world, including Clos de la Siete (a Michel Rolland brand), O. Fournier, Domaine Bousquet, Bodega Lurton, Altos Los Hormigas (by Tuscan, Alberto Antonini).

There’s even a prospect called The Vines of Mendoza, where you can own a private vineyard. Wines from this region offer dense, layered black fruit (black plum, raspberry, blackberry, and olive) with savory notes of red pepper flakes and a dusty, cocoa powder-like finish. Expect to spend over $18 a bottle to sample the true typicity of Valle de Uco.

Drive 150 miles south from the city of Mendoza, and you’ll find San Rafael, a region with a limited number of wineries, some of which were started by Italian immigrants in the early 1900s. Valentín Bianchi is once such winery that offers a range of value-driven, high-quality Cabernet Sauvignon and Malbec wines that offer red roasted berry flavors and a savory herbal finish. San Rafael remains a great value wine region, although few of its producers import to the US.

East Mendoza has many older vineyards, planted with some of Mendoza’s more esoteric varieties including Criolla Grande, Pedro Giménez, Moscatel Rosada, Bonarda, and Tempranillo (along with plenty of Malbec). While this area has long been considered the doldrums for quality Malbec, it’s ripe with potential for the right garagiste winemaker (garage winemaker) to come along and do things differently. 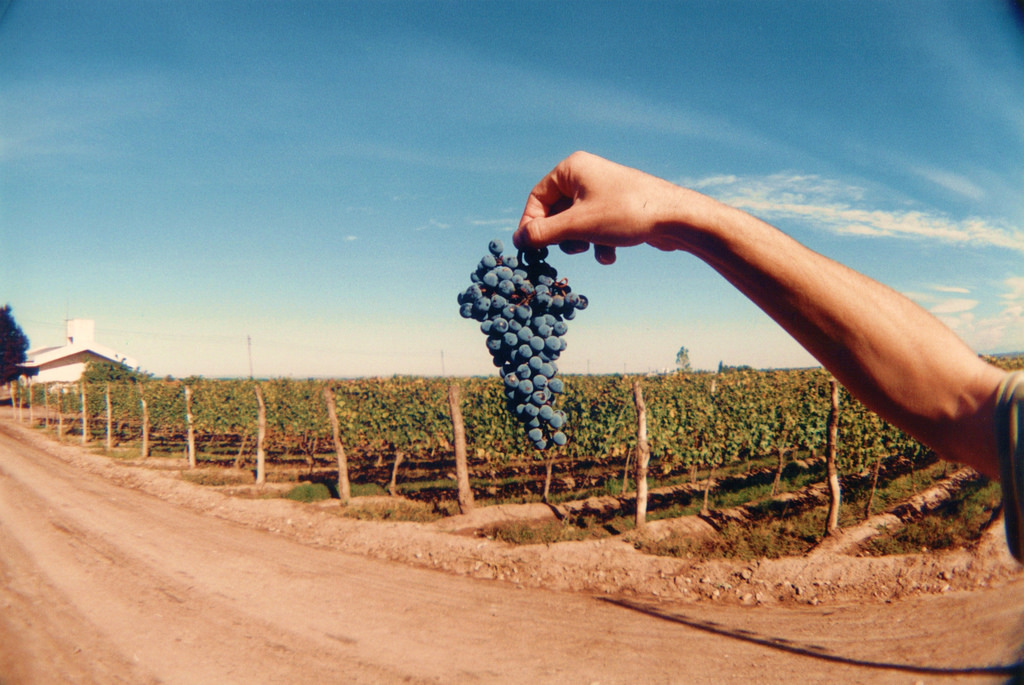 Soils in Mendoza are well-drained, alluvial (river deposited), sandy-clay, with layers of pebbles. Photo by paumaniglia.

Mendoza is one of the more intense wine climates in the world. It lies on a high flat plain (e.g., not rolling Tuscan-like hills) next to the Andes Mountains, whose peaks act as a rain shadow; annual rainfall is only about 8.9 inches (225 mm), characterizing Mendoza as a desert. Fortunately, there is ample snowmelt from the Andes Mountains, which funnels into a vast network of irrigation channels — a system originally designed by the Incas.

All of this means that Mendoza winemakers work with a blank slate. It’s very flat, dry, sunny, and an almost pest-free environment to grow wine grapes, allowing viticulturists to have near-complete control over water management. Also, because the region is so level, mechanization and mechanical harvesters are easily used.

TIP: Mendoza’s terroir is ideal for organic wine growing, so keep your eyes peeled for more producers in this space.

Altitude: The Higher the Better

In a different hot climate, grapes would ripen rapidly and lose all their acidity, which would make for very flabby-yet-tannic red wines. Fortunately, because Mendoza sits at approximately 3000-4000 feet above sea level, night time temperatures drop drastically, which serves to halt the ripening process and preserve the grape’s acidity.

This temperature drop results in a long, slow ripening season that gives the grapes ample time to ripen and develop their sugar content. This makes for a physiologically ripe grape (e.g., sweet tannins) with good acidity.

Enter Malbec: Mendoza’s perfect match. Why? Because it typically requires high amounts of sunlight for full ripening, which is why most Malbec grapes have lower acidity. However, when you match these natural characteristics with the sunny, high-altitude terroir of Mendoza, you have what could be one of the best locations to grow this grape in the world (save for maybe parts of Washington State and parts of China!).

This is why Malbec works so well in Mendoza terroir, and also why you’ll see vineyard heights often listed (as a bragging right) in wine tasting notes. Remember: elevation is Mendoza’s terroir-specific signifier of quality.

Do you collect/obsess over Malbec? Tell us what you’ve discovered about this region’s wines!

Taste a classic underdog wine! Malbec has traveled far from its roots – French wine with an Agentinian accent.

Let’s understand wine aromas through the science behind them. As it turns out, those little whiffs of fruit, flowers, and “minerality” help us deconstruct a wine.