Pure fruit-driven red wines with a touch of tartness.

Unless you grew up in Russia in the 1970s and 80s, there’s a pretty good chance that you’ve never tried Bulgarian wine. It was during this time that Bulgaria (a country smaller than New York State) became the 4th largest wine producer in the world. Of course, westerners barely saw a drop. Ninety percent went to the Soviet Union and the Bulgarian wine industry was a state-run, socialist, wine-growing monopoly. No joke!

Then, things crumbled apart in 1989 when the socialist regime fell. The transition of land ownership and wineries back to the private sector meant quality suffered greatly until about 2000 (check out SAPARD). It’s been a long, slow, hard road for the last 30 odd years but…

Bulgarian wine is back!

Since you’re likely to see more Bulgarian wine in coming years (especially if you’re on the East Coast or Europe), this introduction to the wines of Bulgaria will give you a leg up on what to look for.

Just so you know, not only does Bulgaria offer exceptional wine quality for jaw-dropping value, there are many unique varieties that you won’t find anywhere else.

“After a recent trip to Bulgaria, I was blown away by the wines in general. I thought that the international varietal [wines] were spot-on and tasted “as they should.” I was also very pleased with the minerality and acidity.”
Hillary Zio, 10-year veteran wine writer and educator in New York City. 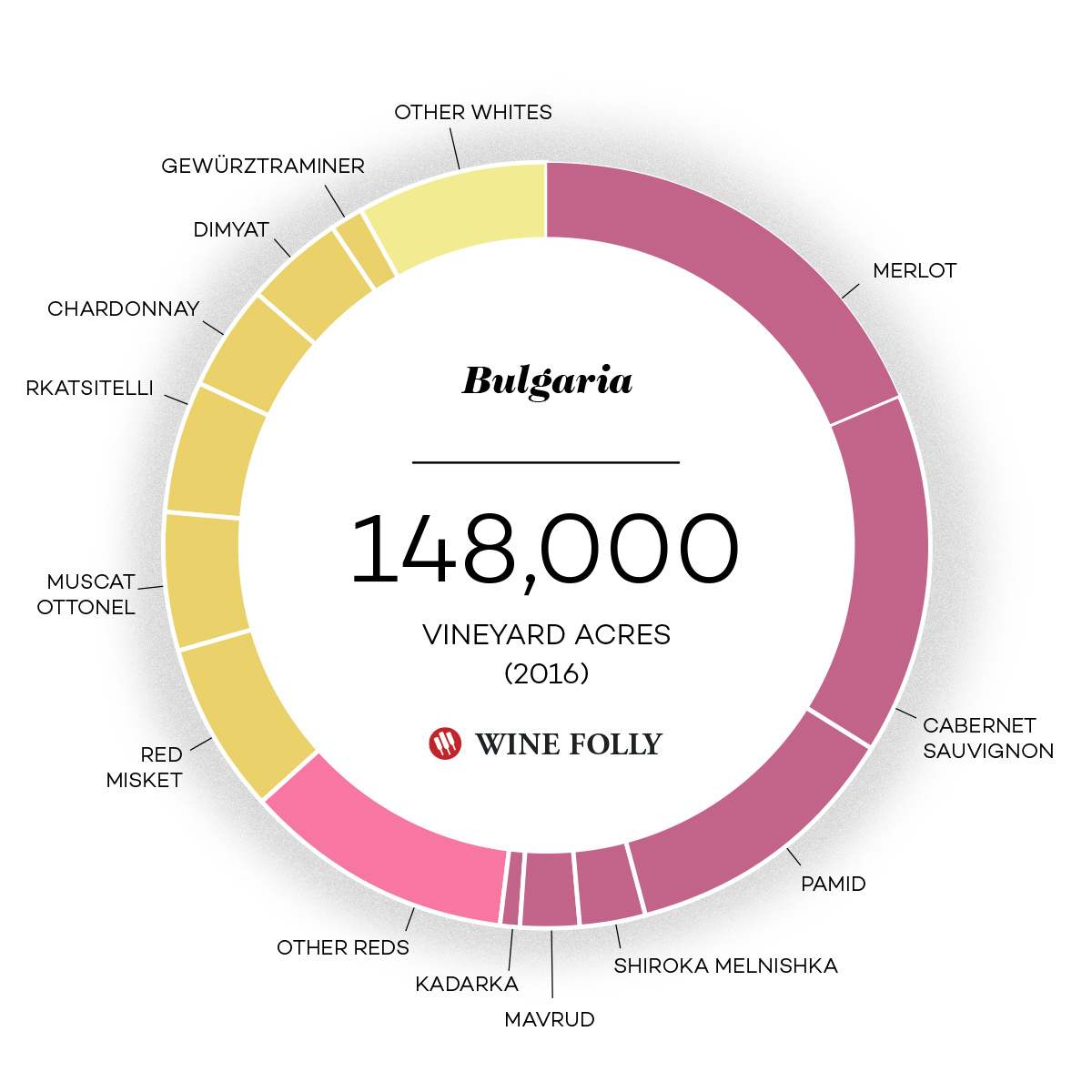 13 Wines To Explore From Bulgaria

Red wines dominate Bulgaria. What will surprise you is the high number of recognizable wine varieties, including Cabernet Sauvignon, Merlot, Sauvignon Blanc, and Chardonnay. These international varieties were actually mass planted during the socialist regime and now make up about 70% of the plantings. Fortunately, several local varieties are being reintroduced by passionate producers who recall a historic period after World War I when independent wineries championed the country’s native grapes.

“After tasting a selection of top Bulgarian wines I was intrigued by the native varieties of Mavrud, Melnik 55 and Rubin. What was interesting was a persisting salinity and savory quality present in all the wines, especially the whites.”
Madeline Puckette, Wine Folly

Another article from the Washington Post about the history and coming of Bulgarian wine.