Even though Rome has a history of winemaking since before the Romans, Lazio (or Latium, as it’s also called), has more recently been considered the doldrums of wine. During the last century, the major grapes, including Trebbiano and Malvasia, were overcropped to produce boring, sweet white wines. That is, until recently! The region has been abuzz with the investments and passions of a few individuals to improve production quality. The good wines are already popping up in places like Tre Bicchieri, so we’re all going to see more amazing wines coming from Lazio soon!

Wine Geek Note: This area carries a bit of intrigue for the geek due to the many ancient volcanoes that dot the region. The volcanic soils definitely play into increased complexity of Lazio’s wines. 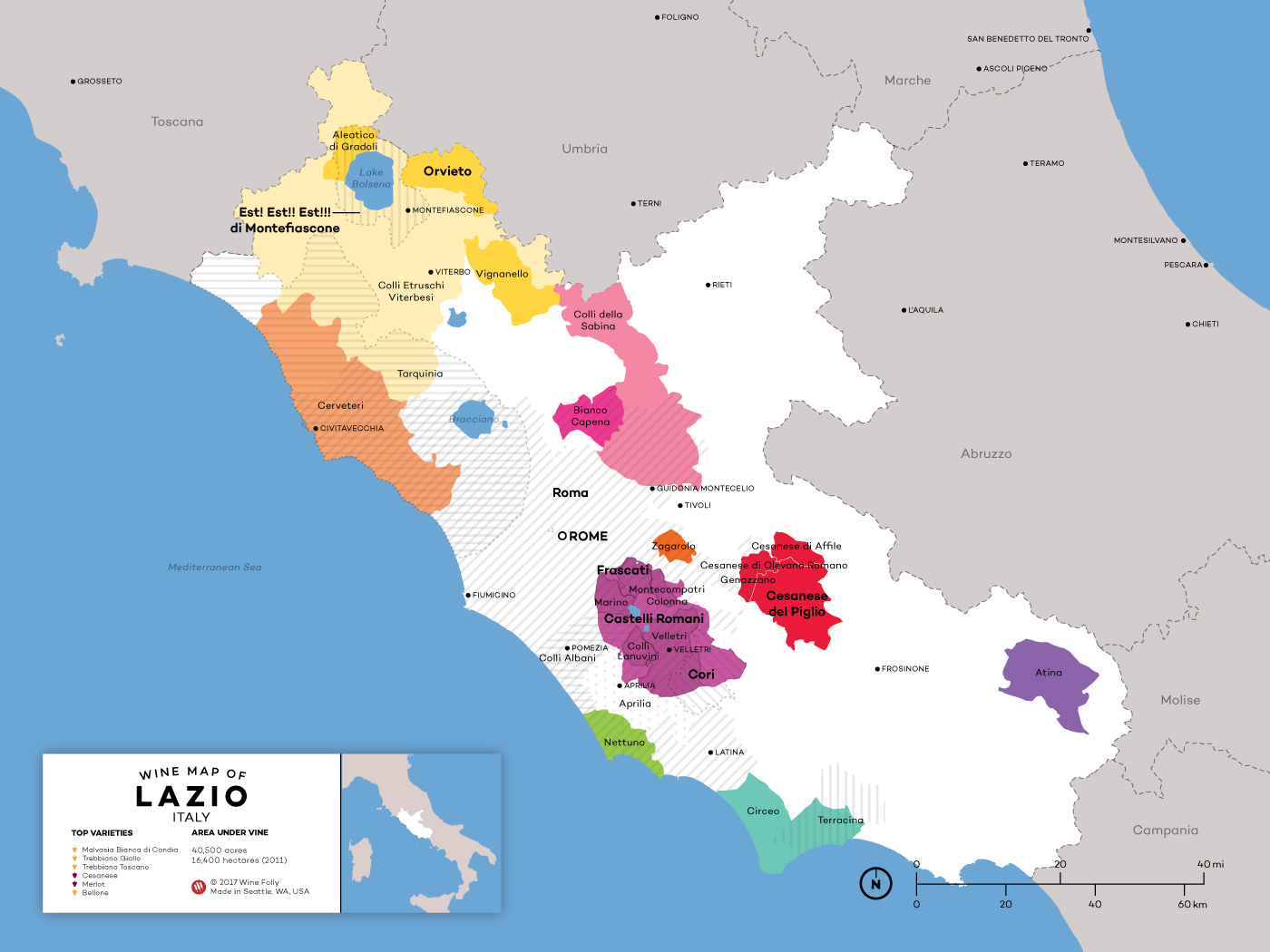 Wines from Lazio are still relatively hard to find outside of the region, so instead of going into an endless ramble on all 30 official wine designations, lets talk about the wines you’ll actually be able to find right now.

The vast majority of Lazio’s vineyards are planted to white grapes – most notably several different cultivars of Malvasia and Trebbiano – which are blended together to make regionally labeled wines (such as Frascati, Est! Est!! Est!!!, Castelli Romani, etc). 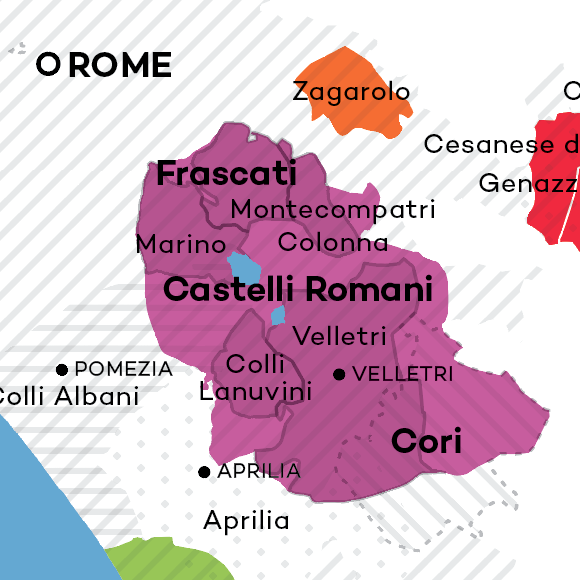 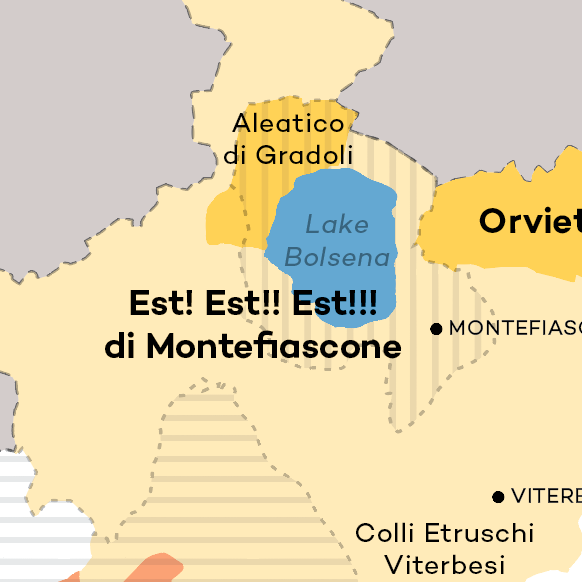 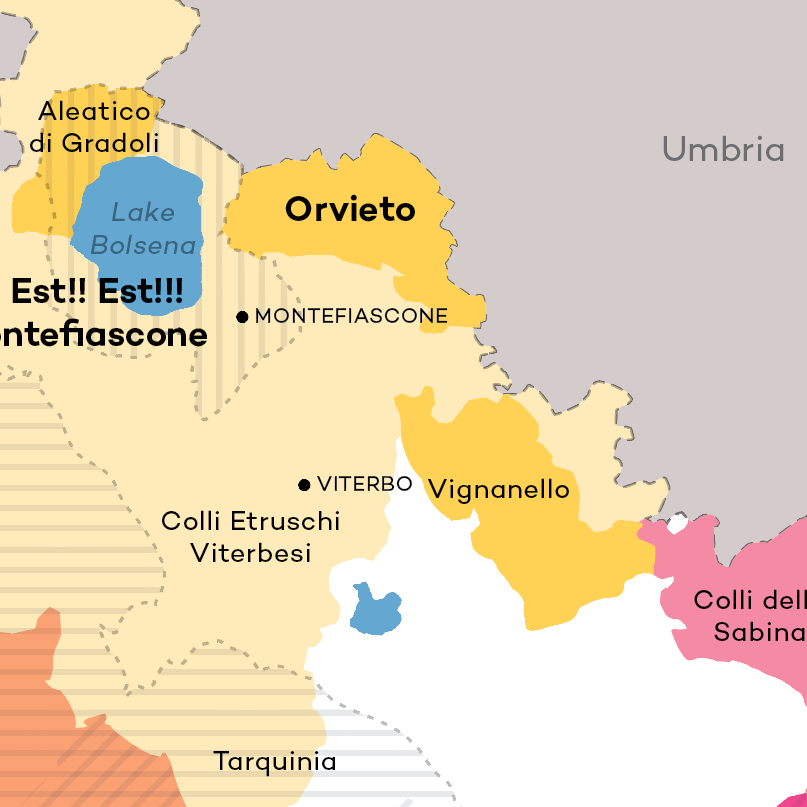 Type: White Wine Variety
The region of Orvieto is mostly in Umbria but also stretches across the border into Lazio. Hurrah! The region’s wines were once prized by popes and kings in a sweeter abboccato (sweet) style, but our changing tastes have rendered this wine dry. The primary varieties used in the blend are Grechetto and Trebbiano Toscano, along with a few other rarities including Verdello, Malvasia, and Drupeggio. Wines with a high prevalence Grechetto deliver notes of crunchy white peach, strawberry, green melon, and a distinct textural chalkiness on the palate. If you are a fan of Provence Rosé, you will be pleasantly surprised with the similarities in these wines. Wines can be labeled Orvieto from the Orvieto zone or just plain Grechetto from Lazio, which will have a minimum of 85% of this grape included.

Type: White Wine Variety
(aka Cacchione) One of the lost and forgotten white grapes of Lazio that’s said to have quenched the thirst of Romans is found growing primarily in the regions to the southeast of Rome (Castelli Romani region). Bellone is a noted for having riper aromas of Asian pear and papaya with grilled, spice notes. Despite it’s historical intrigue, you won’t find many single-varietal Bellone wines, although we did happen upon one producer (Casale del Giglio) championing the variety and imported to the US. 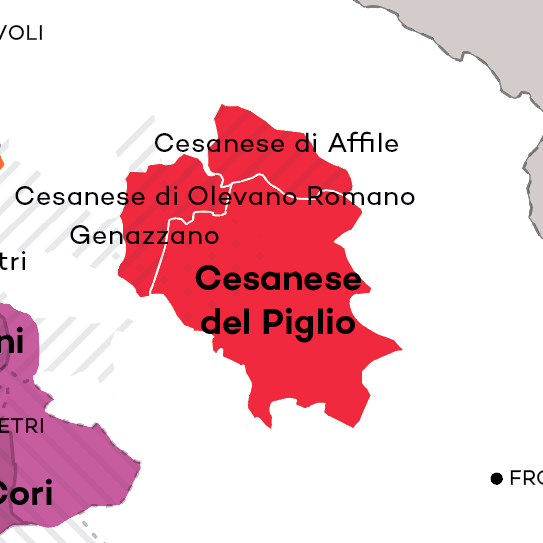 Type: Red Wine Variety
(“chae-sah-NAE-say”) This is another Latium grape that is likely to have existed during ancient Roman times. This wine is intense! On one hand it has lovely red fruits and plums, but with the iron heavy soils in Frosinone (the primary growing area), these wines exhibit age-worthy tannins and rustic flavors of wild game and iron pan. That said, producers grow and bottle this wine with a delicate hand.

Type: Cabernet Sauvignon, Merlot, Syrah, Sangiovese, and Montepulciano Red Wine Blends
Just like in Tuscany next door, Lazio also has an increasing number of French-origin wine varieties including Cabernet Sauvignon, Merlot, Syrah, Petit Verdot, and Cabernet Franc. The most exciting, up-and-coming area for these French-Lazio blends is to the southeast of Rome in an area called Castelli Romani – a collection of communes atop a group of extinct volcanoes. The volcanic soil has shown to work very well for the Bordeaux-style blends, single-varietal Syrah, and others coming out of the area. Because these wines are usually declassified to Lazio IGT, and also use made-up wine names, it’s usually a little harder to find these wines.

In researching these wines, I found very little information about Lazio from classical wine books. Even as the 7th largest production state in Italy, Lazio might just be one of the most overlooked wine regions in the whole country. Knowing this, we can assume that Lazio has grown by leaps and bounds since its former years, but it’s also possible that low quality wines are still in the midst. It’s hard not to be curious about the unique wines of Rome and the exciting future that it holds.