If you think all German wine is white, this up-and-coming region will have lots of surprises for you. This place is all about German red wines.

Württemberg is the place to discover distinctive, delicious red wines that span the range from earthy and spicy to lively and floral. This in-depth guide to the wines of Württemberg will let you in on all the secrets. 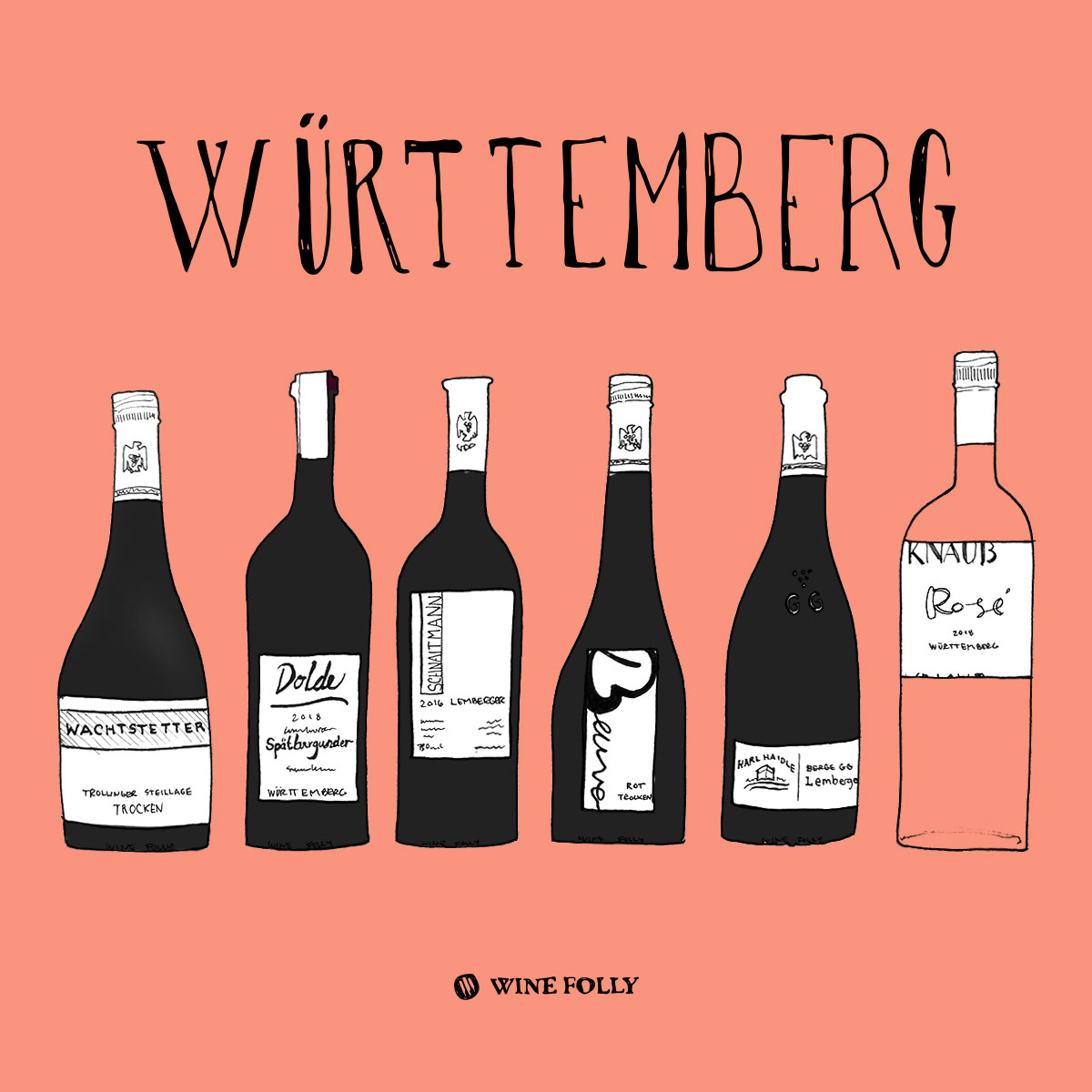 You may know Mosel, Nahe, and Rheingau as the homes of Germany’s legendary vineyards. Surprisingly, Württemberg outproduces all three, but most people have never even heard of it.

The reason? Locals guzzle “all but a small trickle of the wines,” as Frank Schoonmaker wrote in his classic 1956 guide, The Wines of Germany. The region has the country’s highest per-capita wine consumption.

In the past, Württemberg was, in wine writer Jon Bonné’s words, “Germany’s great afterthought” — a place for simple, often thin and sweetish wines. But a new generation of gifted young winemakers is changing the tune.

Critic Stephan Reinhardt notes the wines are “much fresher, purer, dryer, more complex and elegant than in former times.” Germans have made Württemberg a happy hunting ground for new red wine discoveries, with a bit of world-class Riesling too. 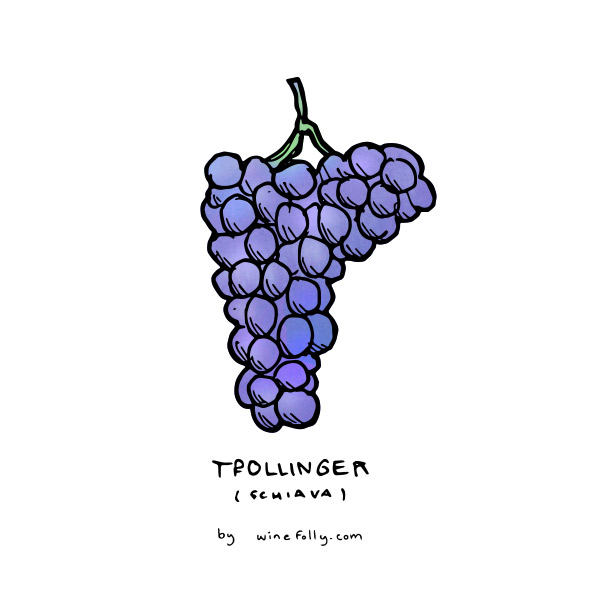 True to its Alpine roots, Trollinger (the “Swabian national drink”) is as refreshing as a bluebird day in the mountains. It’s vivacious and light-bodied, with snappy acidity and subdued tannins. In the glass, look for flavors and aromas of violet, red currants, strawberries, sweet or sour red cherries, and sometimes a hint of bitter almond at the finish. Some natural versions are closer to the Poulsard of Jura (imagine a tart, earthy Pinot). 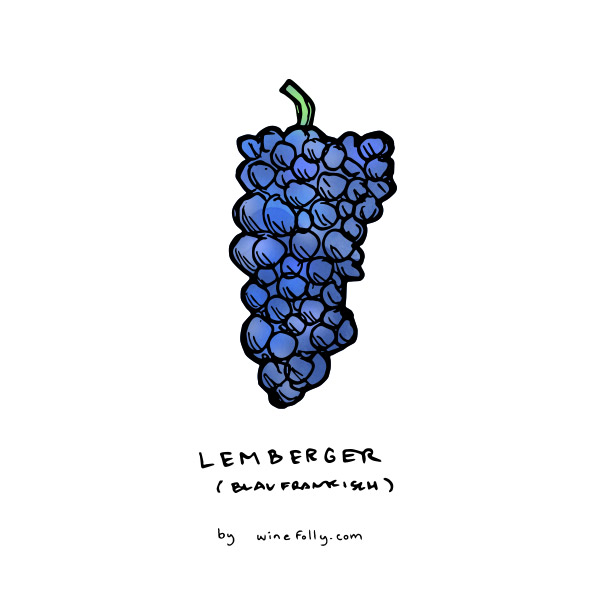 The dark, handsome prince of German reds, Blaufränkisch can be best summed up in the words of one fan as “Swabian Bojo“: juicy, fresh, and intense, but still only medium bodied, with soft tannins. Loads of black pepper, marionberry, plum, sweet or sour black cherry, and an earthy, woodland character. It can be more savory and herbaceous than fruity. And, it is fast becoming Württemberg’s flagship serious red, with excellent aging potential for the best examples.

First documented in the mid-19th century in its Austrian homeland. At that time, in what was then the Kingdom of Württemberg, a “wine improvement society” advocated replacing high-yielding local varieties with Lemberger. 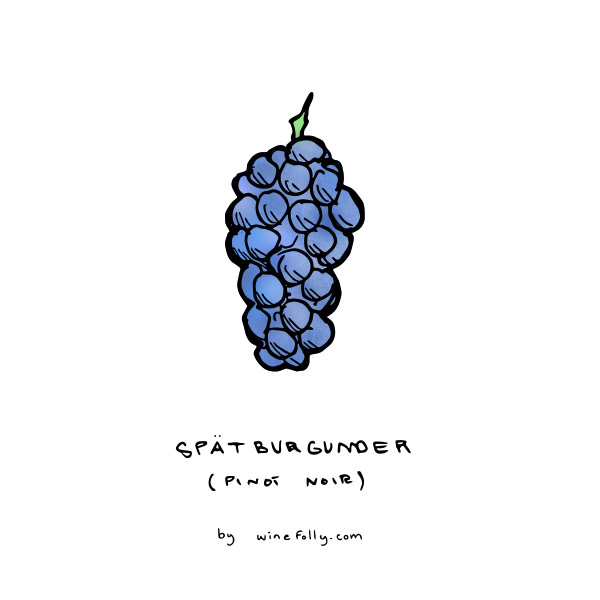 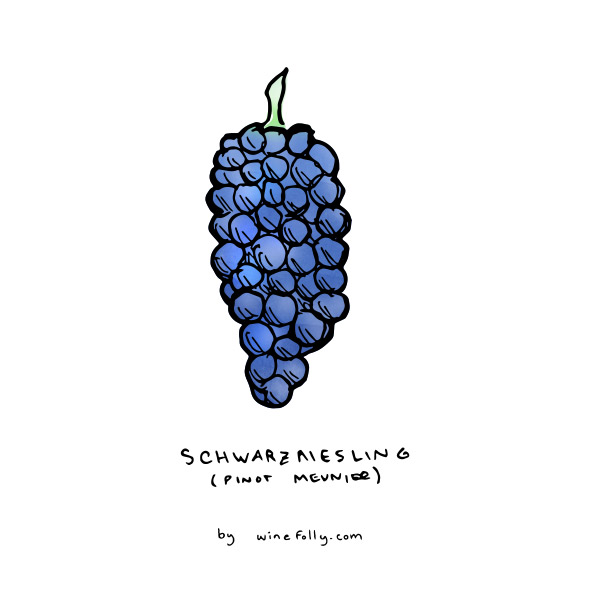 Unlike Riesling, this red grape, better known as a player in Champagne blends, is a specialty of Württemberg, where it makes great Schillerwein (the local term for a crisp, light rosé). It finds its way into some sparkling Sekt as well. 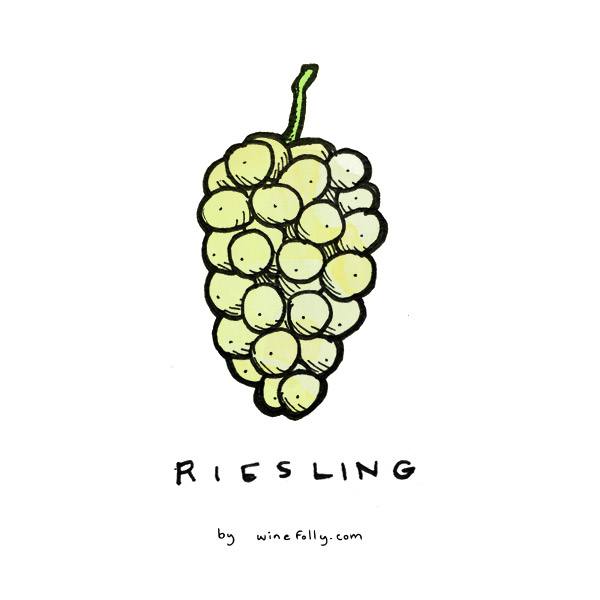 The best of these Rieslings are built to age — in the words of one Württemberg producer — “forever.” As in other parts of Germany, Württemberg Rieslings can be bone dry (Trocken) to sweet (look for words like Feinherb or Kabinett to indicate this). 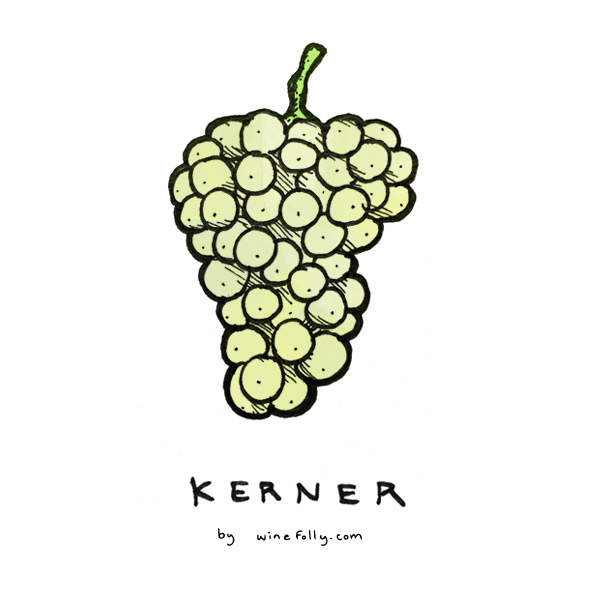 A true native! First bred in 1969 in Württemberg and named after a local poet, it is a crossing of Trollinger and Riesling (yes, a red and white). Compared with Riesling, Kerner can be grown in less favorable sites and offers higher yields, explaining why it’s the most widely planted modern crossing in Germany. Wines are fresh, racy, and fruity or savory — not unlike Riesling — yet milder in acidity, with subtle notes of apricot and almond. 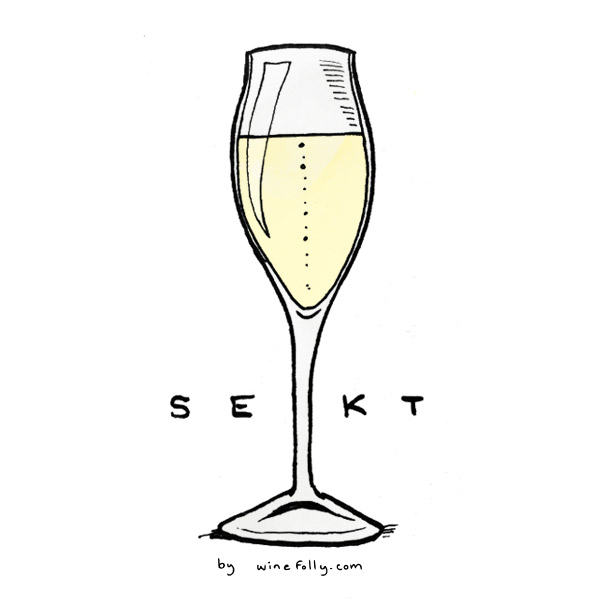 Germany’s first Sekt winery opened in Esslingen-am-Neckar, Württemberg in 1826. Grapes grown in cooler parts of the region where high levels of acidity are retained are typically the source for these sparkling wines. 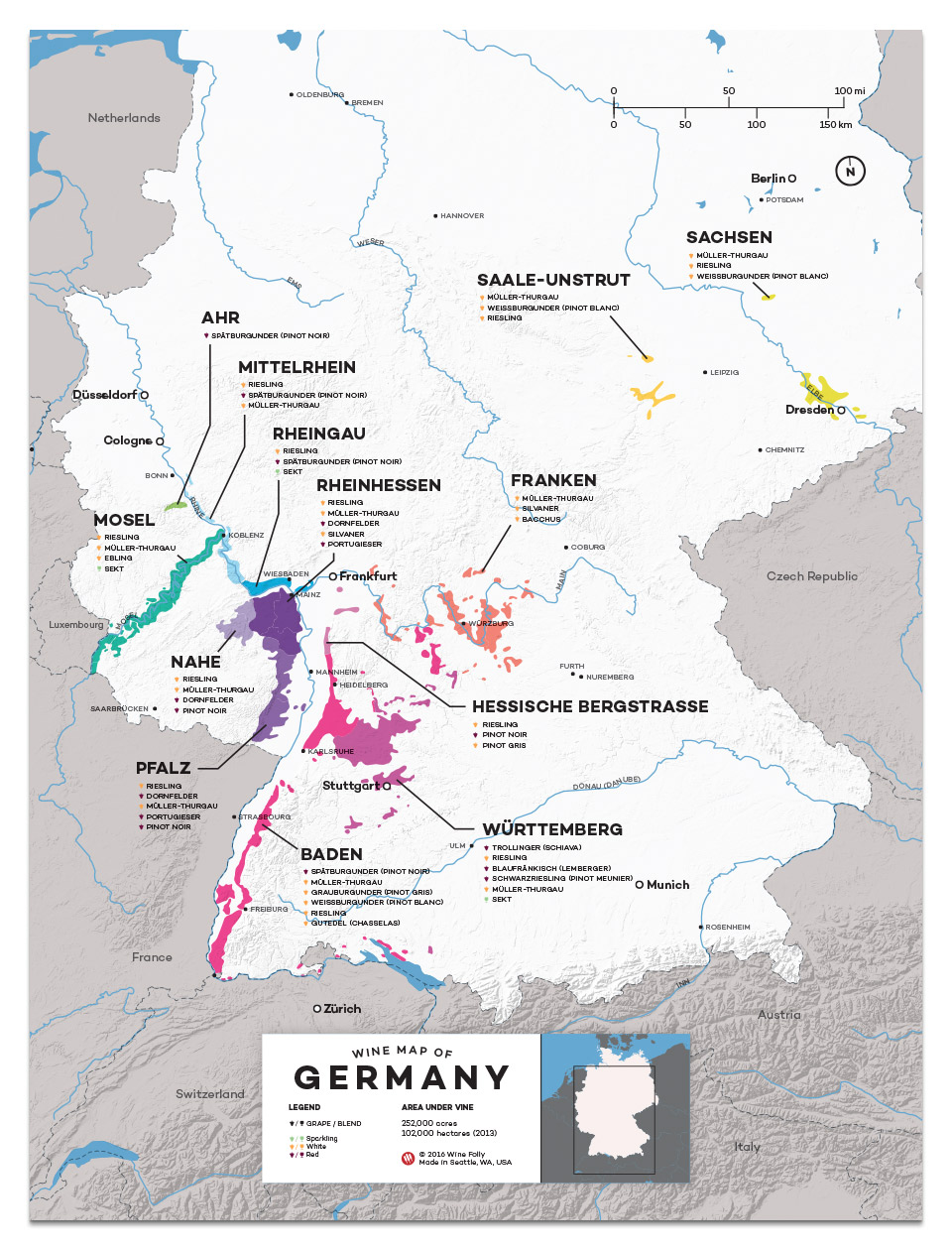 Württemberg pioneered the movement to establish viticultural schools in Germany. Weinsberg was the first, founded in 1860. (Geisenheim, in the Rheingau, now better known internationally, was not founded until 1872.) Weinsberg gave the world the white grape Kerner, a Riesling x Trollinger hybrid. 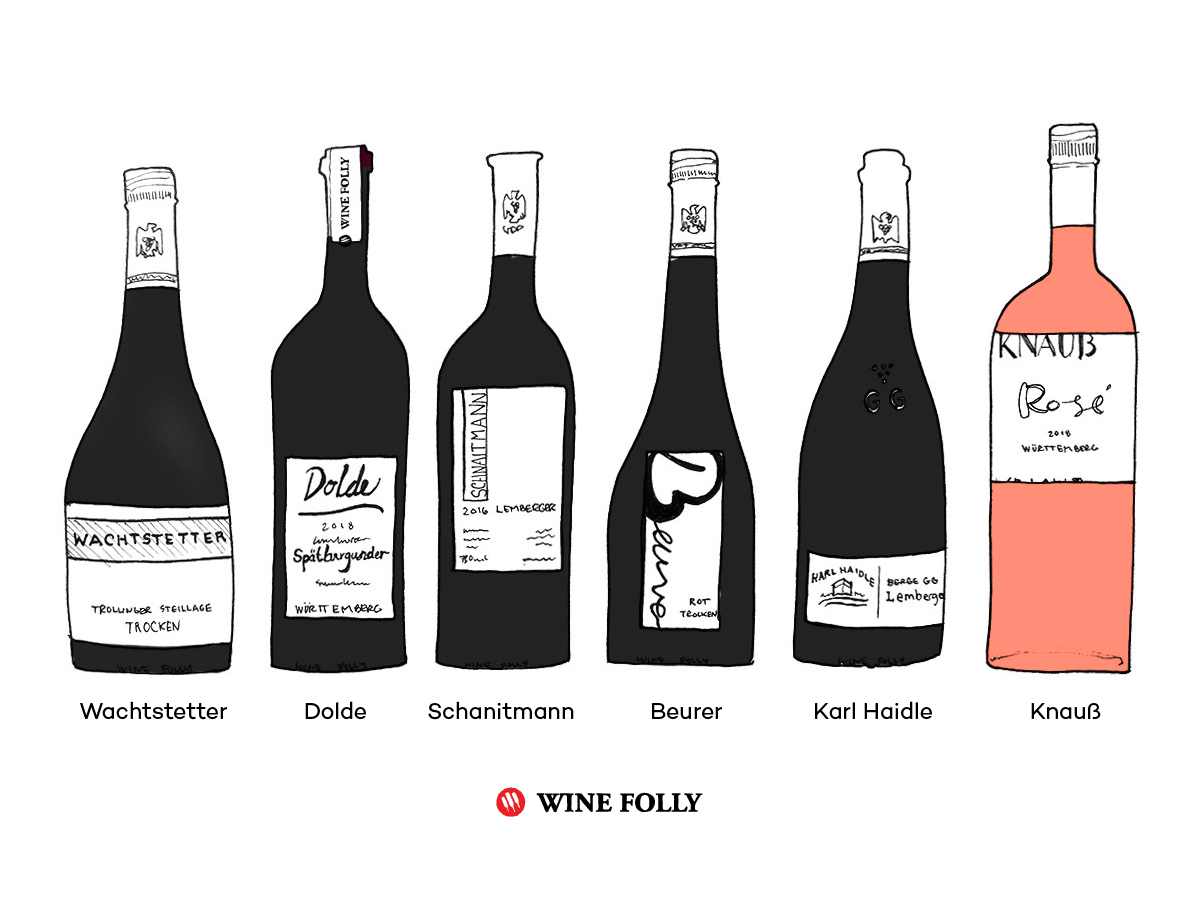 Even though the vast majority of Württemberg wines are still made at co-ops, several individual producers are worth noting. The following Weingüter (estates in German) represent some of the best of what’s coming out of Württemberg right now. (Names you’re most likely to encounter outside Germany.)

In no particular order:

How to Find a Great Bottle of Württemberg Wine

Finding good wine from Württemberg can be challenging because only a fistful of producers are being exported. However, there are a few secrets to connecting with a great bottle short of buying a plane ticket:

Where in the World is Württemberg?

From Stuttgart, Germany’s car capital (home to Mercedes, Porsche and Bosch, and factories of Audi), you’re just a 10-minute drive from Württemberg’s hilly grand cru vineyards. There are thousands of vest pocket vineyards clustered along the region’s many river valleys.

This patch of postcard-perfect Germany is usually lumped together with Baden, since the two form one of Germany’s federal states.

But in wine terms, Württemberg is the cooler and more productive region. While both regions excel in red wines, Baden’s warmer, sunnier climate (much like that of Alsace, which it borders) allows it to specialize in Spätburgunder (Pinot Noir).

Württemberg’s relative coolness and soil types suit it best for Trollinger (21% of all plantings), Lemberger (15% and rising) and Schwarzriesling (14%), and, in some areas, Riesling (18%), and a small amount of Spätburgunder (11%).

Most of Germany’s best vineyards are reserved for royalty: Riesling. But in Württemberg, you can find grand cru sites planted with Spätburgunder (Pinot Noir), Lemberger (Blaufränkisch), and other varieties too. Expect exceptional concentration and finesse from these wines, with price tags to match. 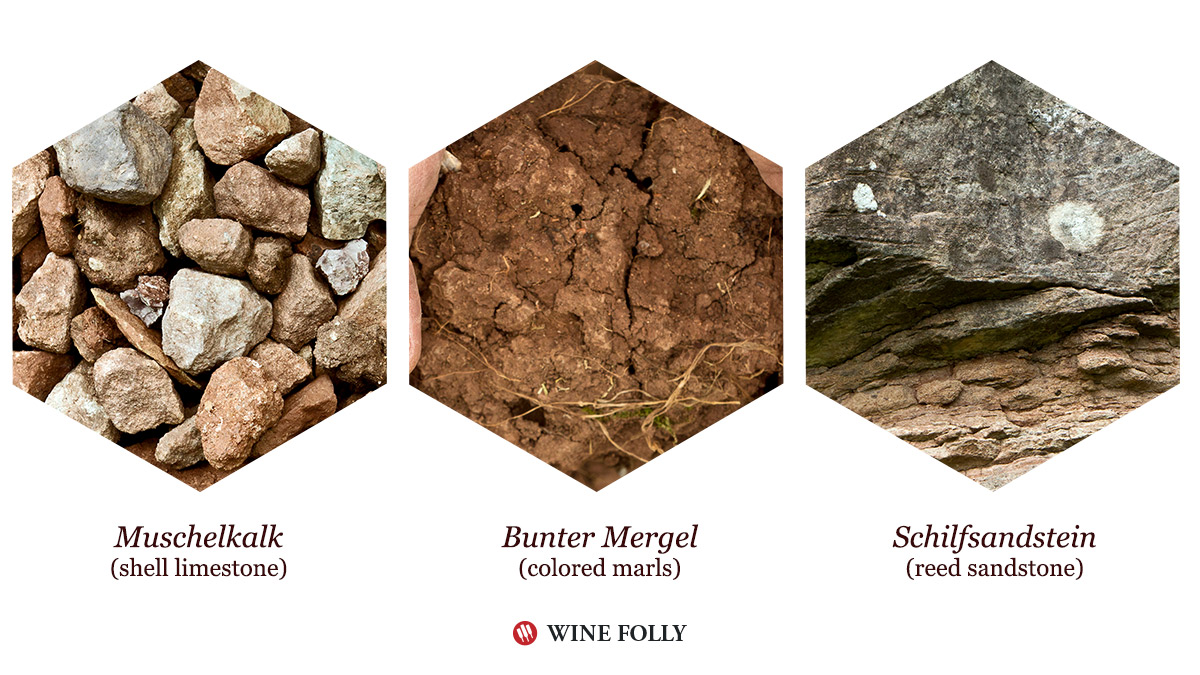 Most of Württemberg is nestled in the foothills of the so-called “Swabian Alb,” a highland region that rose up out of the Jurassic Sea millions of years ago. Some of the area’s most distinctive soil types are:

These low-nutrient soils are tough to farm for food crops, but are perfect for vines. They force roots deep into the earth and control vigor, yielding concentrated, expressive wines.

Besen are a Württemberg specialty. They are seasonal taverns where you can enjoy the wines of that vineyard and sample local dishes. This is a great way to explore the region. Look for a broom (Besen in German) at the door to point the way.