Waiter… There’s Arsenic in My Wine!

A class action lawsuit filed last year caused quite a stir in the news media. Find out what wines were called out and why we’re not going to stop drinking wine.

UPDATE: In late March 2016, the lawsuit was thrown out! See the article on winesandvines

According to some recent news and a 2015 class-action lawsuit (Doris Charles et. al. vs. The Wine Group, Inc., et. Al.), which included large wine labels featured in places from Target to Trader Joe’s, wine drinkers may be slowly poisoning themselves with arsenic. The lawsuit is based on a claim by Beverage Grades, a Denver laboratory, that found arsenic in 83 brands of wine it tested exceeding those permissible in drinking water.

The lawsuit created quite a stir in news media…

What’s the deal with Arsenic in wine? 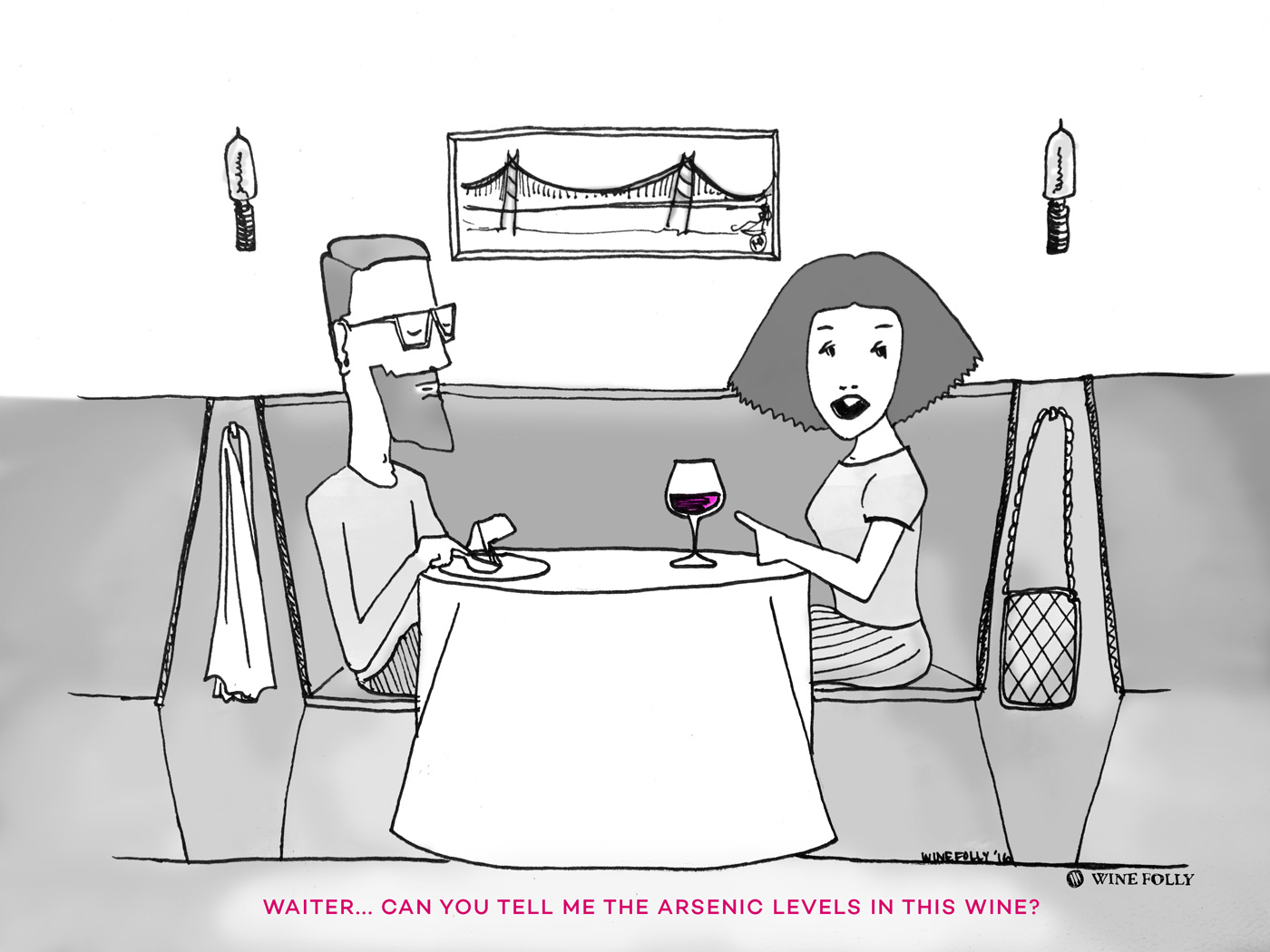 Arsenic is a naturally occurring element that, above a certain threshold, is toxic to humans. As rain, rivers and wind erode rocks that contain arsenic, it leaches into water, soil and the food chain. Many foods have detectable amounts of arsenic–rice, seafood, apple juice… to name a few.

How Much Arsenic is in Wine?

The presence of arsenic in wine has actually been known about for decades. It can result from a number of sources pre- and post-production: naturally-occurring in the soil, ground water, the use of bentonite as a filtering agent, industrial emissions, contact with metals during winemaking, as well as agricultural pesticides.

The U.S. has not established a maximum arsenic concentration for wine, but Canada uses 100 parts per billion (ppb) and the 46-member International Organisation of Vine and Wine uses an upper limit of 200 ppb. No more than 0.3% (if any) of wines exceed the 100 ppb threshold. Contrasting this, the U.S. Environmental Protection Agency has set a limit specifically for drinking water at 10 ppb…

As a group, American wines have higher arsenic levels than European (and Oregon) wines possibly due to the underlying geology (see above).

White and rosé wines tend to have more arsenic than red wines.

So maybe drink more expensive ($15–$20) or European (or Oregon) red wine if you want to be on the safe side?

Why We’re Not Going to Stop Drinking Wine… At Least Not Yet.

Comparing arsenic amounts in wine to water does not appropriately characterize the potential health risk. Why? First, water limits are set at a fraction of the acceptable daily limit. Second, recommended daily water consumption is far greater (91-125 oz. per day) than wine (5-10 oz. per day). Arsenic levels in wine range from 10-76 ppb with an average of 23.

Researchers estimate that arsenic ingestion from wine accounts for only a fraction (8.3%) of a typical adult’s daily arsenic intake. The bottom line is that unless you are a heavy wine drinker and consuming large amounts of other dietary sources of arsenic, wine does not represent an arsenic health risk.

Beverage Grades is a consultancy that independently lab tests beer and wine in the United States. We like the idea that wines should be tested for quality/health purposes, but we believe that more research might need to be done to identify a reasonable low-limit for wine, beer and spirits.

We found it interesting that Beverage Grades specifically targeted large wine groups for this lawsuit even though later it was shown by a Washington State University study that arsenic above 10 ppb was common in almost 100% of their samples (e.g. all wine). Instead of a glitzy lawsuit, maybe this is a good opportunity to learn what exactly defines quality wine–scientifically speaking–for public health.

Do wine and moderation combine to equal healthy? To really answer that, you need to look at what’s inside a glass of wine.