Does wine increase the likeliness of breast cancer?! A recent study says yes, but did they jump the gun? Find out… 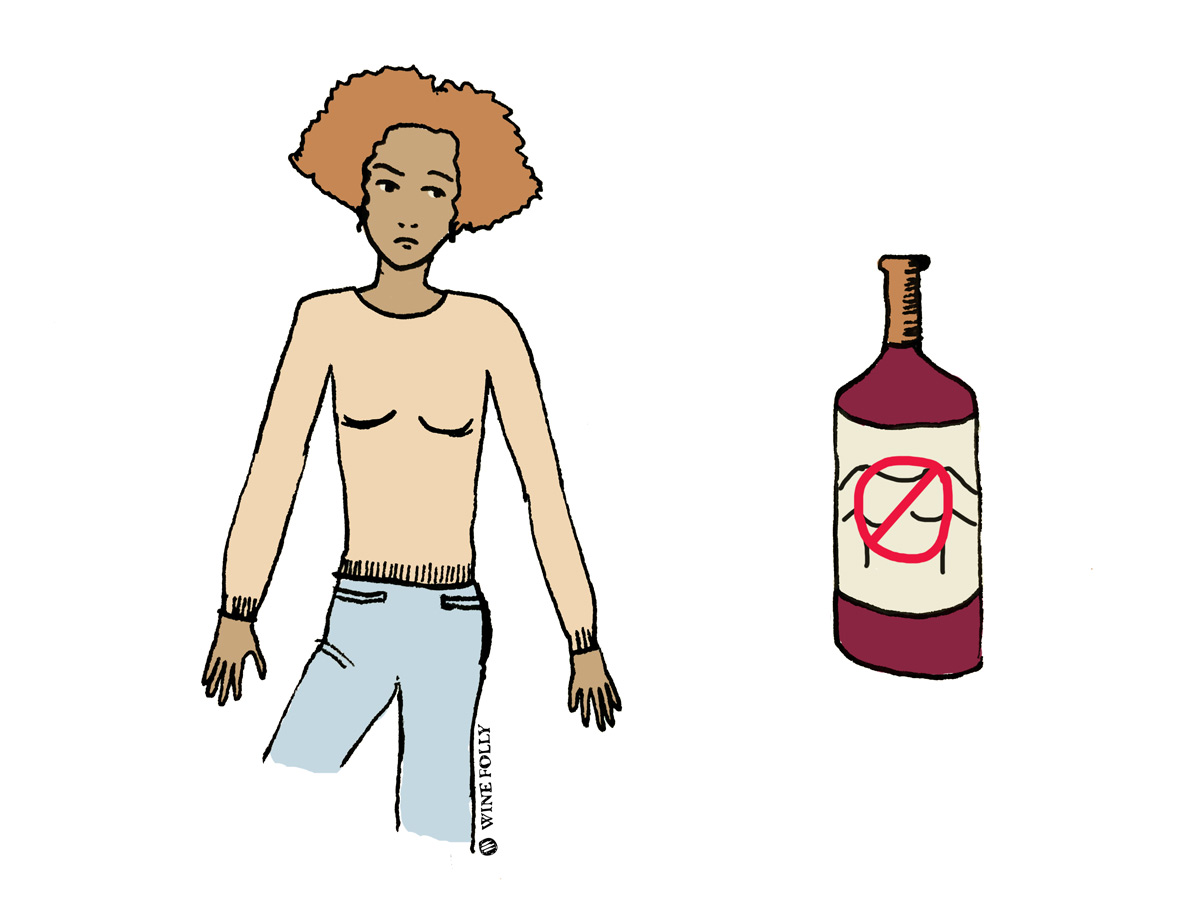 What the study didn’t do though, was separate out the different types of alcohol (beer, spirits and wine) and show relative risks for each type. After the study came out it received a great deal of rigorous critique from the science community and members from the International Scientific Forum on Alcohol Research crunched the numbers:

The multivariable risk ratio mentioned above means that non-drinkers and wine drinkers have an identical risk factor (1 = 1). To make more sense of this information we asked Dr. Edward Miller (the person who vets Wine Folly’s health content) to make sense of the original report, what it means, and show us how wine behaves differently than other types of alcohol:

Wine Folly: Can you explain exactly what the study showed that has women so concerned?

Dr. Miller: Certainly. The study showed, namely, that women who drink light to moderate alcohol (1/2 to 1.5 drinks/day) showed a 1.6% overall increase in breast cancer risk. So, if the study is correct, women wine drinkers would see a raised lifetime risk of breast cancer from 12.4% to 14%. 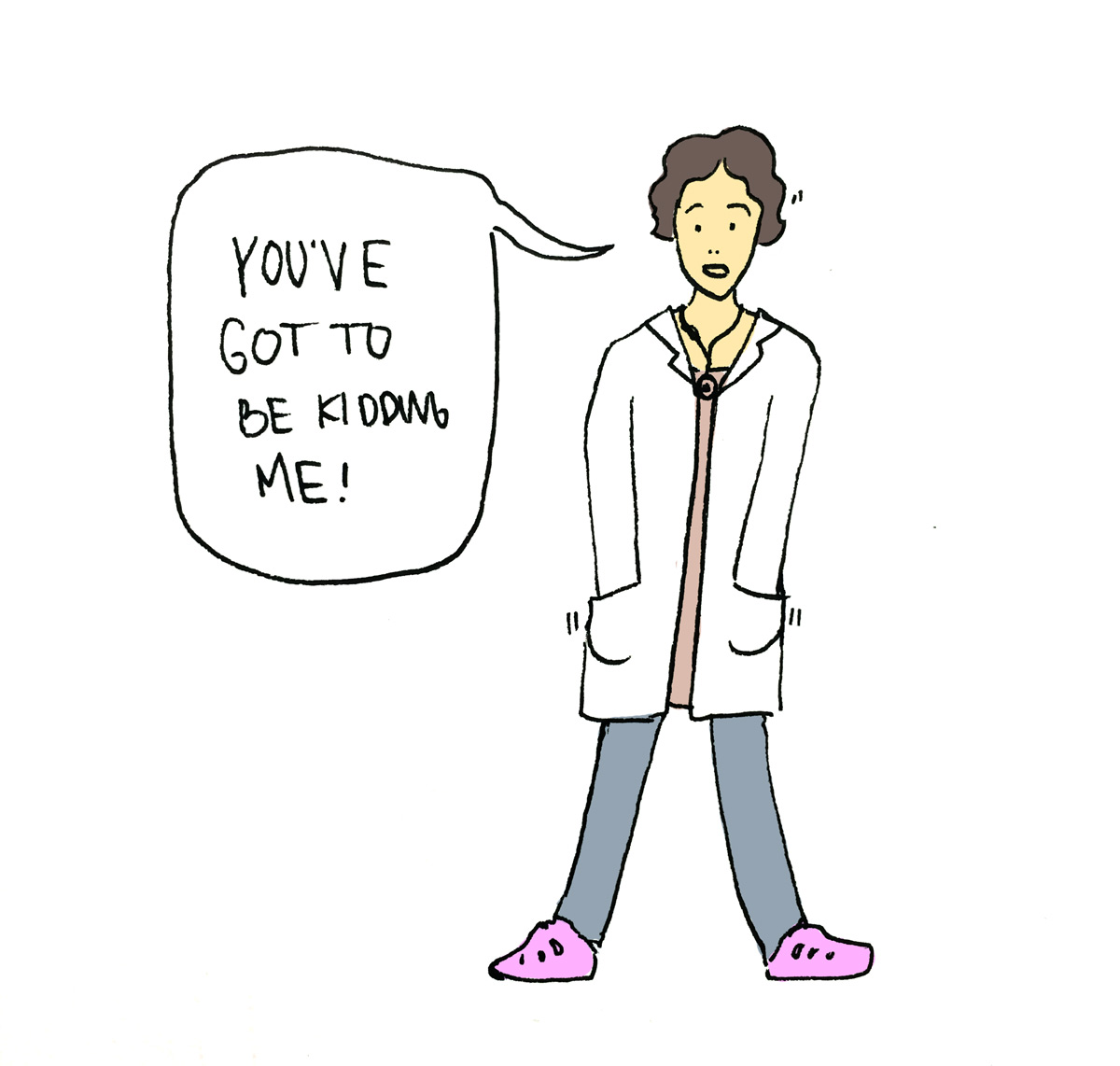 Wine Folly: After the study came out it received some backlash/criticism from the scientific community. Can you explain to us what the issues were, how they affect us, and how they might affect the validity of the study?

Dr. Miller: There is valid criticism on several fronts.

First, the researchers ignored the overall impact of drinking. Study after study [(see references below)] has shown decreased overall death rates in light to moderate alcohol drinkers, primarily by decreasing cardiovascular deaths–the number one killer in the developed world. If women stop drinking altogether, many more will likely die of heart disease and diabetes than will potentially be saved by a few less cases of breast cancer. (1,2,3,4,5,6)

Secondly, a recent study showed a 34-46% decreased risk of death in women who are moderate to occasionally heavy alcohol users. (7)

Thirdly, the study didn’t include cancers which are thought to be decreased by alcohol intake: kidney, thyroid, and non-Hodgkins lymphoma.

Most significantly to your readers, analysis of the supplemental data not included in the original study revealed different findings which could have lead to a different conclusion. The unpublished data showed that women who drank 1-3 glasses of wine per day had no increased risk of breast cancer while liquor and beer drinkers experienced a 26 and 34% increase, respectively. (8) 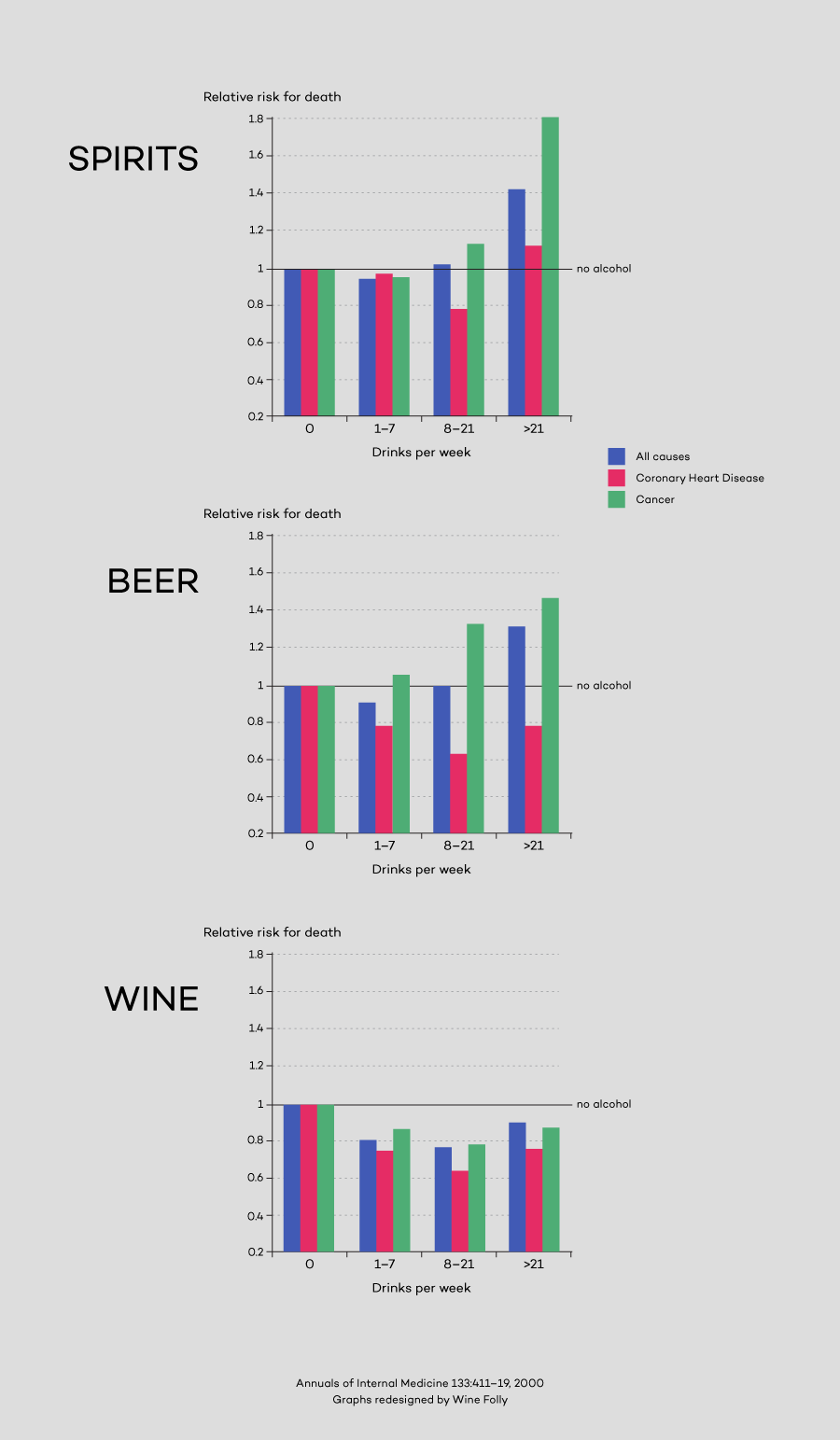 The Annals of Internal Medicine (2000)

Wine Folly: To support this argument you forwarded along some charts from another study (above). What can we learn by observing this data?

Dr. Miller: The Annals of Internal Medicine published a study which showed decreased cancer deaths in wine drinkers but not in beer or spirits drinkers. To my knowledge, no medical study has shown increased cancer deaths in wine drinkers. That must be somewhat tempered by the fact that wine drinkers, on average, are a little different than consumers of other alcohol beverages: they are thinner, eat more grains and exercise more – all of which reduce cancer risk. (9)

Several other studies have shown about a 20% overall reduced risk of cancers with wine consumption which is not seen with beer or spirit consumption. (10, 11, 12, 13) 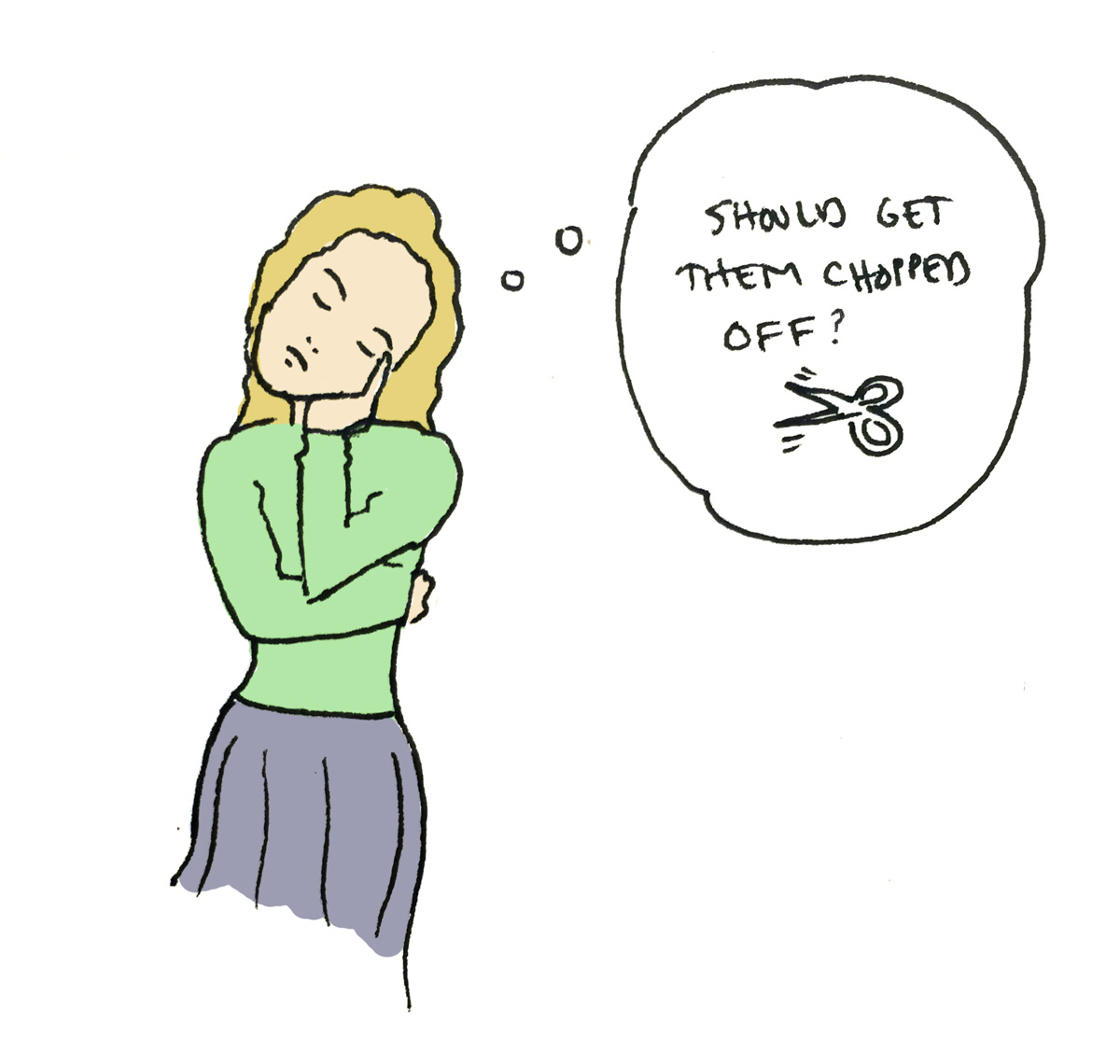 Wine Folly: Finally, I’ve heard that folic acid is an important substance to reduce the risk of breast cancer. But I’ve also heard that drinking a glass or two of wine a day will decrease folic acid uptake? Can you tell us more about this relationship?

Dr. Miller: Many studies have looked for a link between what women eat and breast cancer risk, but so far the results have been conflicting. Some studies have indicated that diet may play a role, while others found no evidence that diet influences breast cancer risk. Studies have also looked at vitamin levels, again with inconsistent results. Some studies actually found an increased risk of breast cancer in women with higher levels of certain nutrients. So far, no study has shown that taking vitamins reduces breast cancer risk. This is not to say that there is no point in eating a healthy diet. A diet low in fat, low in red meat and processed meat, and high in fruits and vegetables might have other health benefits.

While many organizations are actively studying folic acid and multivitamin supplementation (including Susan G. Komen), preliminary evidence suggests that high doses of folic acid (also known as folate) may actually increase the risk of breast cancer. Having said that, folic acid is an essential “B” vitamin which the body requires. Excessive alcohol intake has been shown to decrease absorption of folate.

Wine Folly: Have any last thoughts for us about what we may do that could continue to decrease the risk of breast cancer? (e.g. should I be taking my vitamins? should I drink smarter?).

Dr. Miller: Risk factors for breast cancer include: advancing age, mothers or sisters with breast cancer, smoking and physical inactivity. You can’t help your age or choose your parents but you can be physically active, not smoke and drink alcohol sensibly. While alcohol does appear to mildly increase the risk of breast cancer, wine may not affect risk or may even decrease the risk. Talk to your health care provider about your breast cancer risk and appropriate screening. There are so many things out there that may be bad for you… you can live your life under your bed in fear or you can enjoy life.

“you can live your life under your bed in fear or you can enjoy life.”

Dr. Miller is an advanced-level certified wine sommelier from the International Wine & Spirits Guild. He administers a Facebook page, “Don’t Drink Too Much but Don’t Drink Too Little” which regularly addresses the role of wine & alcohol in health. He and his wife are physicians in St. Thomas, US Virgin Islands.