Just as a mechanic may have to make some tweaks under the hood to ensure a car performs at its best, winemakers can also be found doing a little fine-tuning in order to keep fermentation and wine production on track. Chaptalization and acidification are two such methods of tweaking the winemaking process to ensure a better final product. More specifically, these techniques involve adding something to the mix: whether that be sugar (chaptalization) or acid (acidification).

Though these two additives are barely detectable in the final product, their use does suggest that the grapes were somehow lacking or of lesser quality. Limited by law in some areas and kept hush-hush in others, these two corrective additives will reveal some of the lesser-talked about truths in winemaking. 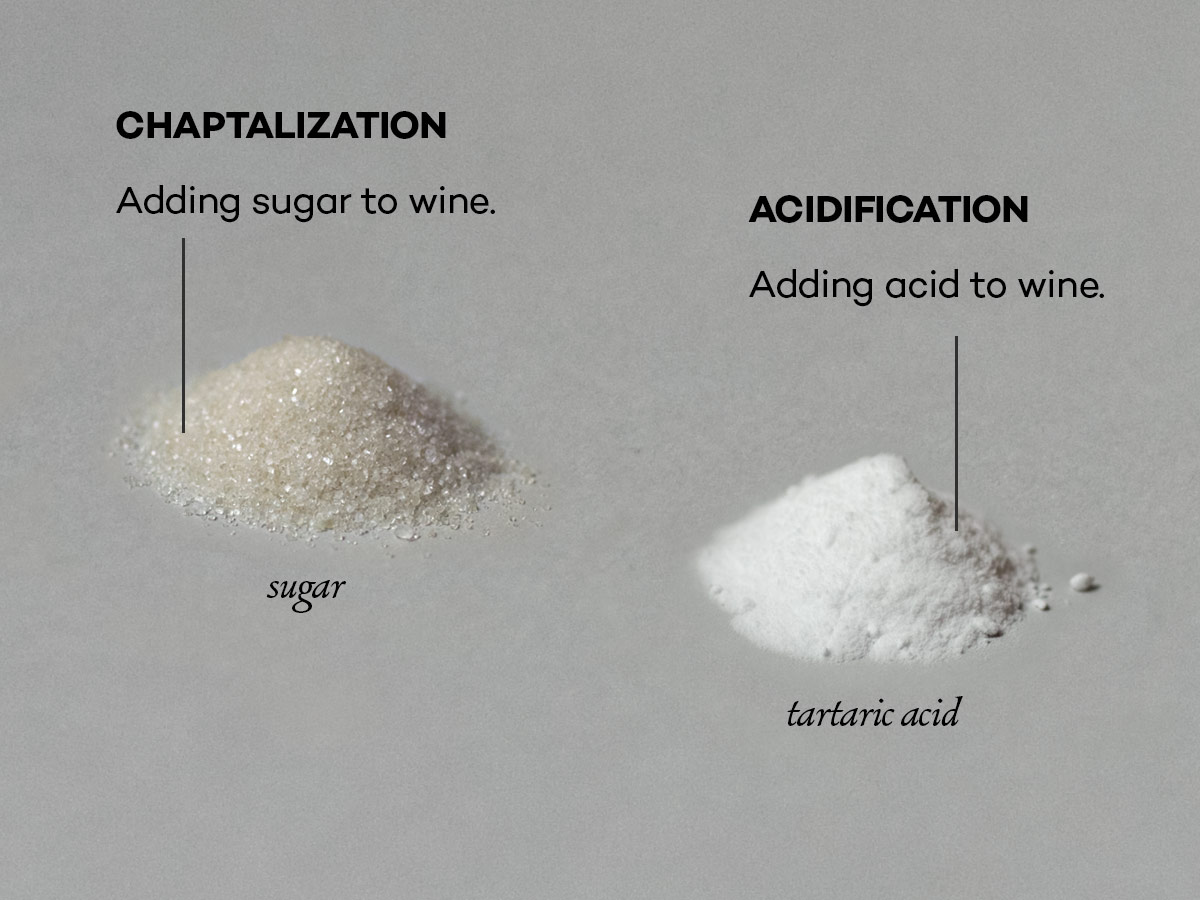 Chaptalization is the addition of sugar during fermentation in order to boost the wine’s final alcohol content (percentage). For example, in France, the basic Bourgogne Blanc (Chardonnay) is required to have at least 10.5% ABV (alcohol by volume) but if the harvested grapes are overly sour (acidic), adding sugar will ensure that the wine reaches the minimum required alcohol percentage. Even though chaptalization adds sugar, it’s not meant to sweeten a wine; it’s simply meant to give yeast enough fuel to turn into alcohol.

Chaptalization is common in cooler regions where grapes may struggle to reach ripeness and may be harvested with lower sugar content and higher acidity.

Acidification is the addition of acids (usually tartaric and malic acid) in order to increase the final acidity of a wine. This technique is often used when grapes are harvested too ripe and, as a result, produce wines with low acidity and a high pH. A high pH will cause wine to be unstable and it will produce off-flavors and deteriorate quickly. Thus, acidification is needed to stabilize a flabby wine.

Acidification is commonly used in hotter regions where grapes may be harvested too ripe (too sweet).

Can you taste chaptalization or acidification in wine?

Because chaptalization only affects the alcohol percentage, it’s not really detectable. That said, some experienced tasters believe that, despite the increased alcohol content, chaptalized wines tend to lack complexity and may also taste overly acidic (given that they’re made with under-ripe grapes).

Acidification is also tricky to detect, but can be detectable with some tasting experience. Wines with added acidity will often have a somewhat unbalanced, sweet tart flavor (like the candy), which can persist in the aftertaste, similar to the tingly aftertaste of soda-pop.

How do you know if a wine was chaptalized or acidified?

Right now, there are almost no label requirements for mentioning acidification or chaptalization. We suspect that if there were, you’d see a surprising number of popular wines using these additives to make their wines taste more well-balanced. That said, natural wines with no additives (or only sulfur additives) are the only wines available that won’t have acidification or chaptalization.

If you’re not spending over $20 a bottle for wines, then it’s perfectly okay to accept that processes like chaptalization and acidification are used to produce decent tasting, good-value wines. On the other hand, if you’re looking for exceptional quality wines, additives like chaptalization and acidification are clues that should cause you to question the quality of the wine or vintage.

And now that you know what these two techniques are all about, you’ll now the right questions to ask to get to the bottom of what was really going on under the hood.