6 Intriguing Wines To Drink This Fall

For those of you lucky enough to have a fall season where you live, go outside and breath in the air. There is a special smell in the air that’s crisp but still dusty from summer. Some of us are fall lovers because we long for the psychological feeling of completeness of a season and we yearn for a cuddly winter. The harvest season is not just for wine grapes, but also pumpkins, carrots, artichokes, sunflowers and mushrooms.

Below are 6 intriguing wine varieties that are perfect for the fall mood. Some are unexpected, so be prepared to use your most adept wine-finding techniques to seek them out.

6 Intriguing Wines To Drink During Fall 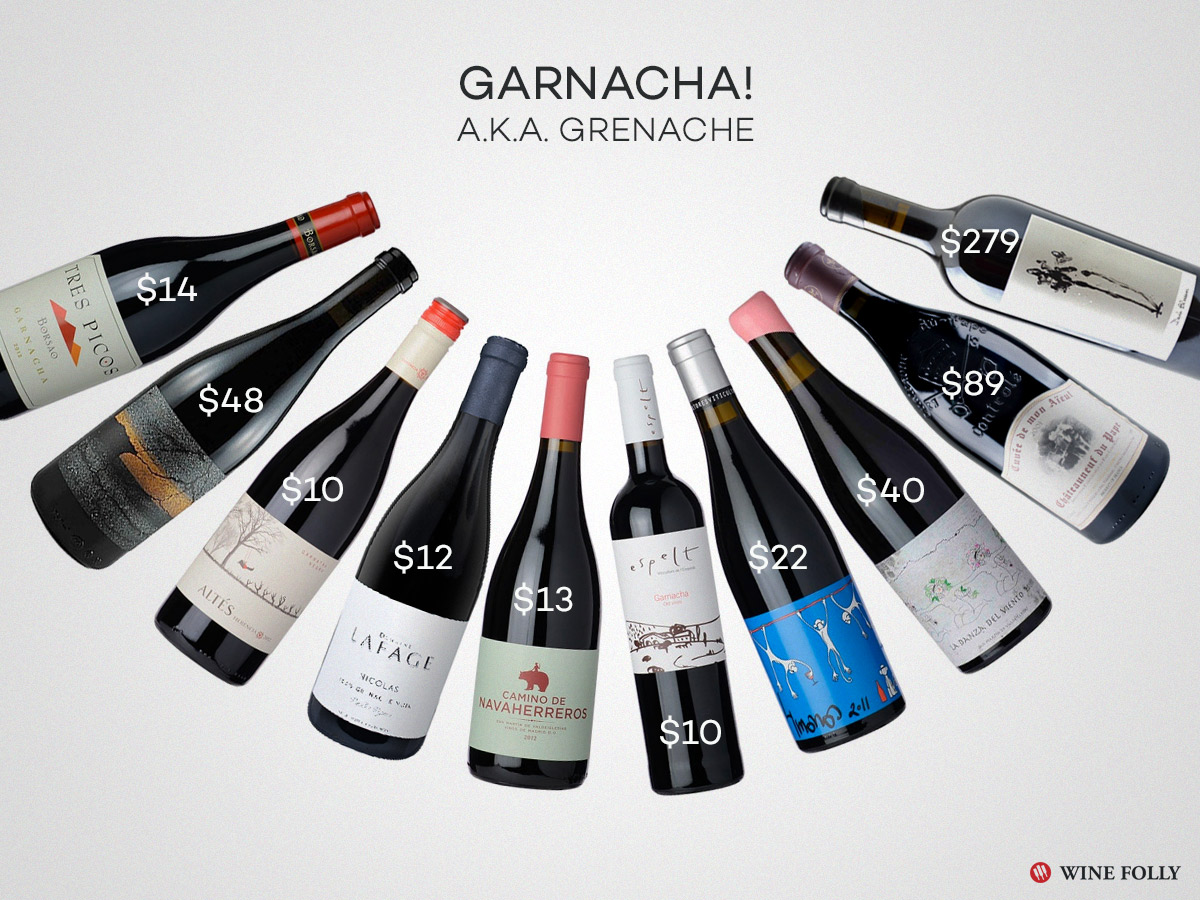 If you flip to the section on ‘Grenache Noir’ in the Wine Grapes book, it surreptitiously points towards ‘GARNACHA’. Apparently, we’ve been saying it wrong.

‘Garr-Na-Cha’ is a party in your mouth.

Garnacha is actually Spanish in origin which means we should probably adopt its original name. Either way, ‘Garr-Na-Cha!’ is a party in your mouth.

Ranging from rustic-and-leathery to vanilla-fruit-bomb, this is perhaps the most flamboyant of all the noble grapes. It has brilliant, sweetish, red fruit flavors from strawberry to raspberry and offers some of the highest natural alcohol levels (just behind big-boy Zinfandel). It will match up to any sort of fall squash recipes you throw its way while simultaneously sending tingles of warmth from your esophagus to your toes. 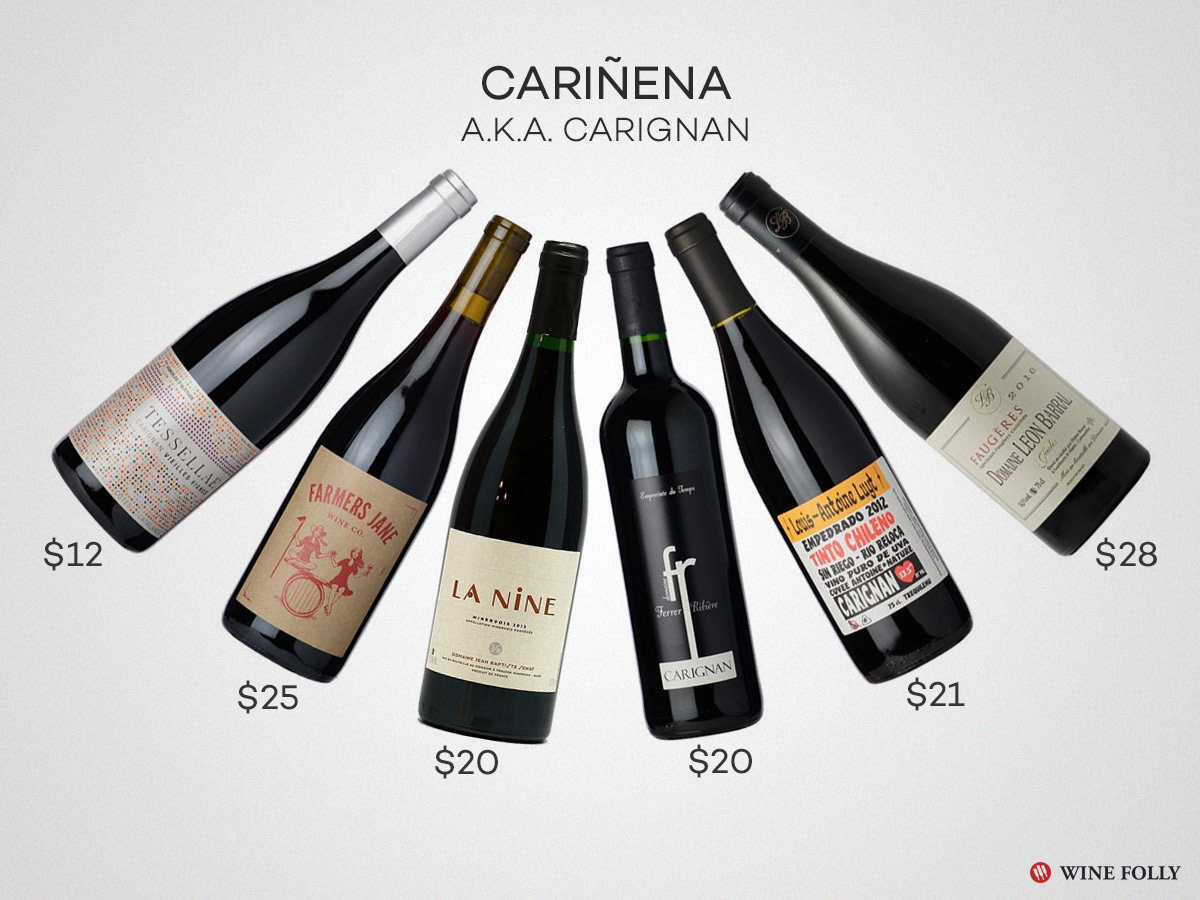 We often call this grape after its French name, Carignan . You can choose which word you prefer, but calling it ‘care-in-yen-ah’ pays homage to its homeland in Aragon, Spain. Cariñena used to only be used for high-volume commercial wines that often had an off-putting ‘hotdog’ aroma to to them. Today, there are several producers who are embracing the grape and making really awesome wine.

Imagine sweet dried cranberries and cinnamon spice with a meaty Kielbasa sausage note. I know this sounds weird, but if you’re a savory wine freak (love wines like Nebbiolo and Tempranillo?) then this is definitely something that’s right up your alley. A great Cariñena will be bold, red fruit-driven, gamey and have smooth tannins. Cariñena will match wonderfully with any turkey or poultry dish you throw its way. 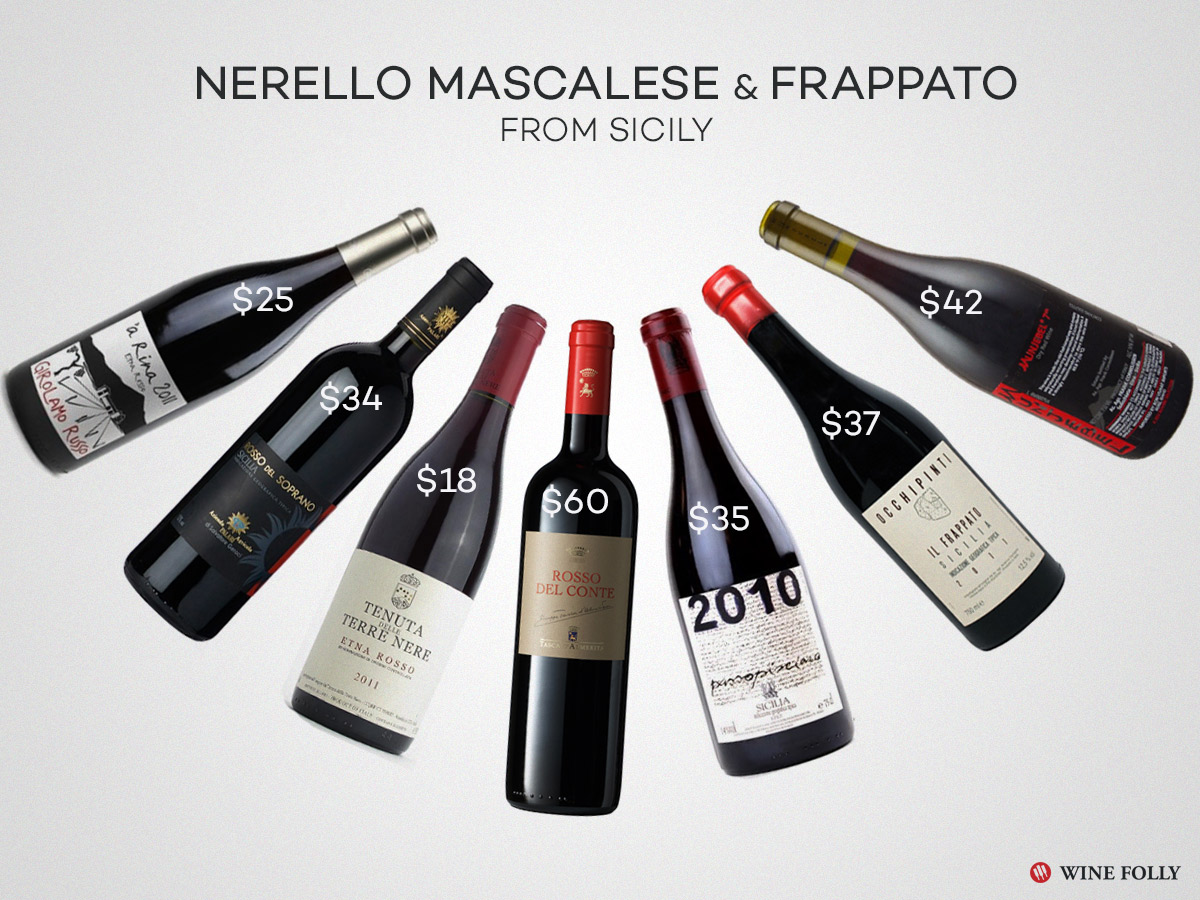 Sicily was reinvigorated after we fell in love with its champion red grape: Nero d’Avola. Today, we’re starting to realize that Sicily has much more awesomeness in the realm of delicious red wines. This includes Frappato and Nerello Mascalese (‘Frap-pato’ and ‘Nair-rello Mask-ah-leezay’) The 2 wines we are excited about are noticeably lighter than Nero D., however this is what makes them so perfect for fall.

Expect an explosion of sweetish red fruits in the spectrum of candied cranberry, strawberry and raspberries. This is great, but this is just the start! Enter savory and floral notes reminiscent of lavender, smoke, leather, bacon fat, saltiness and freshly cut green grass. This wine will treat you especially well during lunchtime drinking because it typically has light alcohol. Frappato might just be the perfect bacon burger wine. Afterall, wine-and-burger pairings deserve to be taken to the next level.

If Sicily has anything similar to the delicacy of Pinot Noir, Nerello Mascalese is it. Most of the vines grow close to Mount Enta, so they give off a distinct smoky volcanic aroma along with a basket of fruity-flower flavors of cherry, raspberry, plum, rose and violet. It tends to sway on the sweeter, more plush, end of the ‘pinot noir-like’ spectrum but not without additional complexity of leather, pink peppercorn and cocoa. 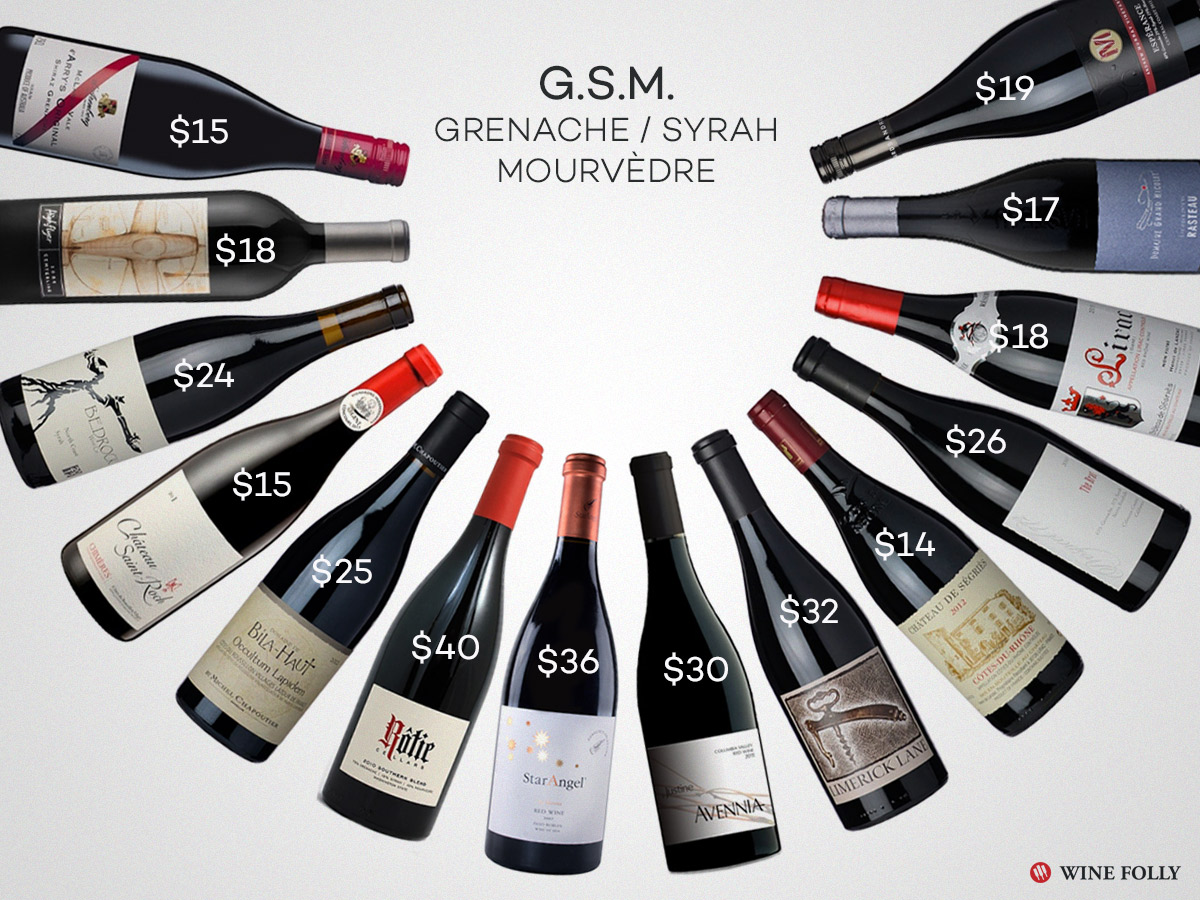 GSM as in Garnacha, Syrah and Mourvèdre are the classic three varieties in a southern Côtes du Rhône red wine. Because of the fame of Châteauneuf du Pape in the Rhône region, these three grapes have been planted nearly everywhere. The regions that suit the grapes offer lots of sunshine and, when done right, the wines taste like the sun was magically captured in the bottle.

Since it’s a blend of grapes, you should expect a mishmash of red and black fruit flavors. The wines from the Old World countries tend to have this tart herbaceous note that is often described as ‘garrigue’, which is a very unfamiliar word. But to attempt to describe it, the flavor of Old World Rhône is almost like unsweetened hibiscus and black tea with lavender, sage and a squeeze of lemon. In short, it’s complex. The New World versions tend to be juicier and more pure in their fruit flavors. 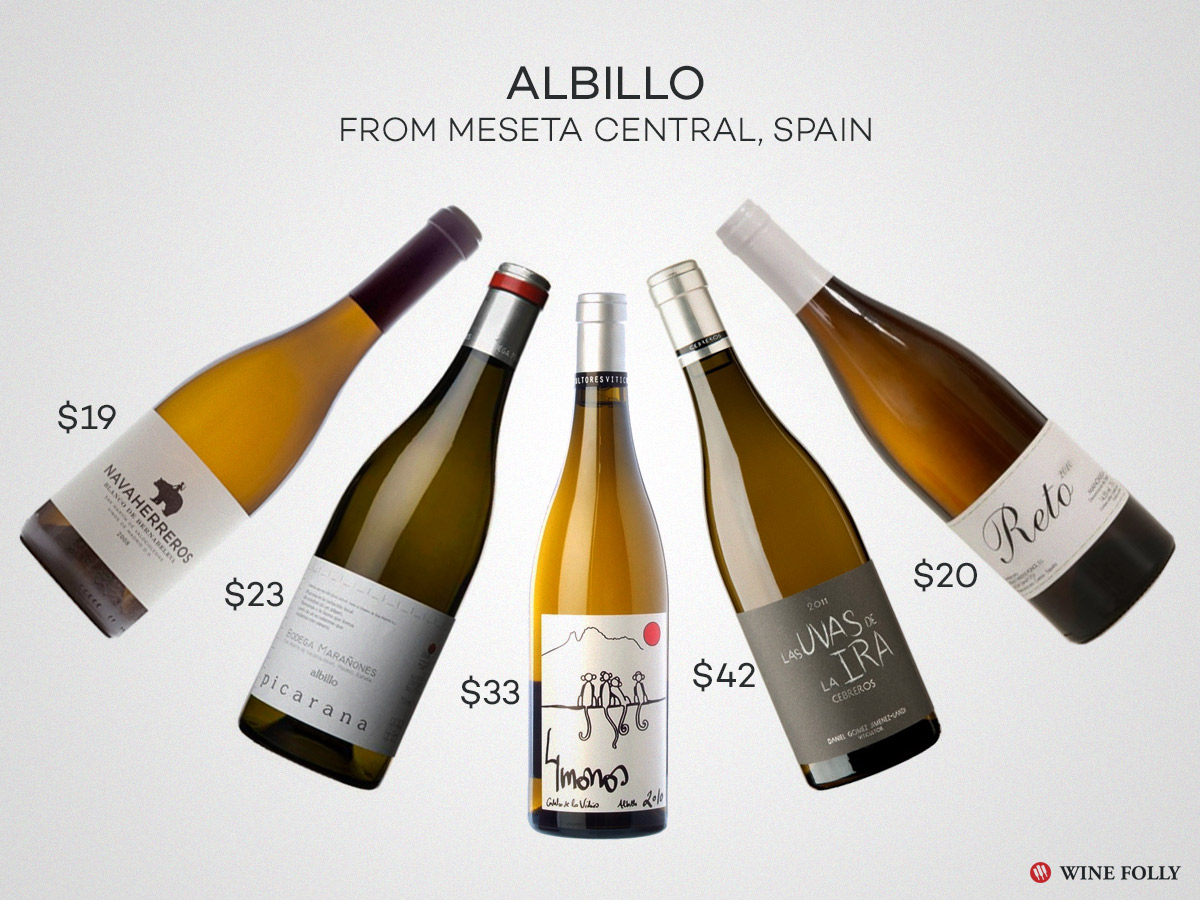 A rarely uttered grape variety in the US that’s growing in popularity all over Spain. Albillo can be found in the Meseta Central and behaves a lot like Chardonnay in terms of body, but with a distinctly Spanish fruity twist. It’s not an easy wine to find, but then again, that’s part of the fun.

Tasting of apple, honeysuckle, orange, wax lips and chamomile, Albillo has moderately high alcohol which gives it this nuance of sweetness. It’s often textured with oak aging which adds a swath of creaminess. Some examples are lower acidity so be prepared to drink it without food. 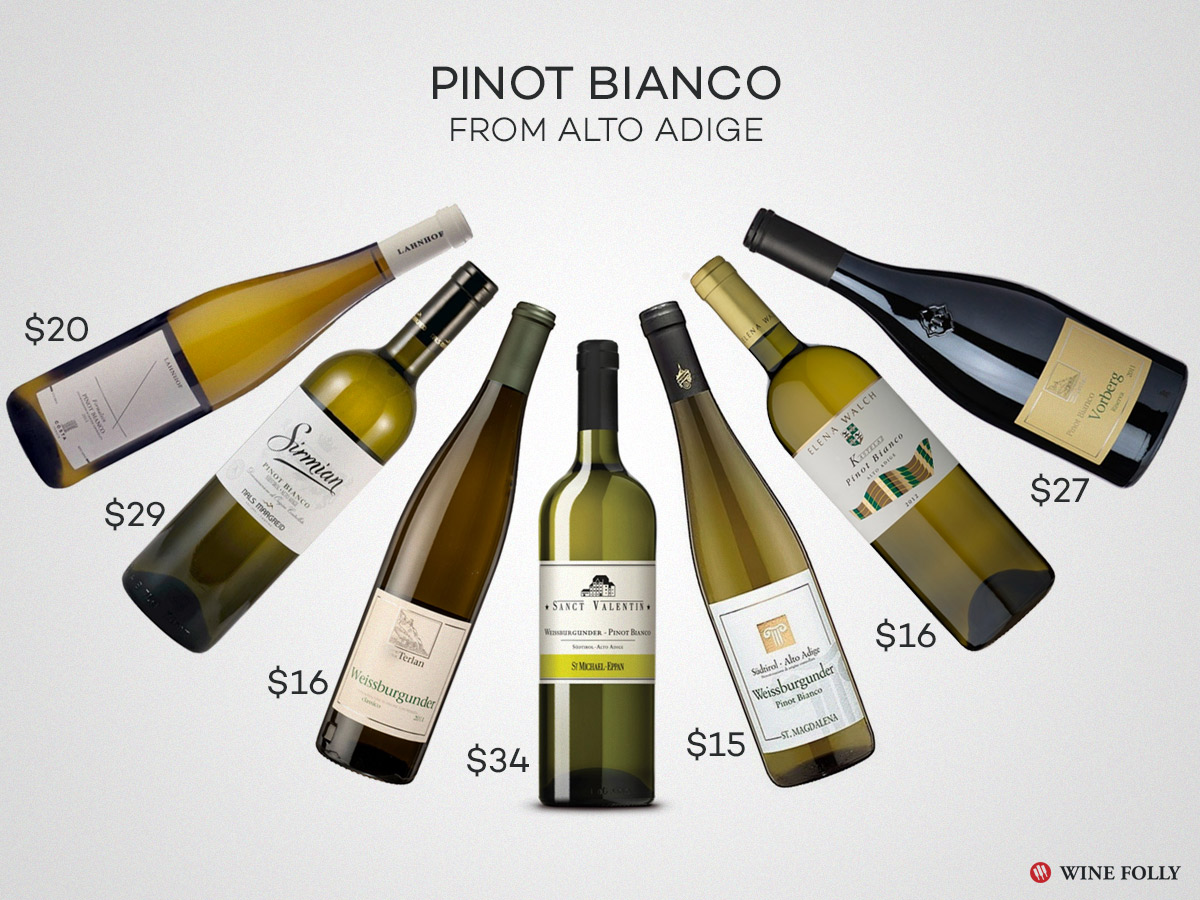 A strange pick for fall until you realize it’s a surprisingly awesome match with shrimp and curry dishes. These cuisines will undoubtedly warm the cockles of your soul this fall, so why not have a Pinot Bianco or German Weißburgunder (weess-burgund-err) sitting in your fridge ready to support your midweek take out.