Oxidized, fortified dessert wines from the Island of Madeira ranging in style from off-dry to sweet. Wines are incredibly stable and are known to age over 100 years.

Madeira is a popular choice for reduction sauces because of its walnut-like flavors and tart acidity, but it also pairs well with artichoke, pea soup, and asparagus.

Madeira is a 500 year-old winemaking tradition from the island of Madeira (and neighboring Porto Santo). Just like Parmesan-Reggiano cheese, Madeira is a Protected Designation of Origin product (PDO) meaning no other wine can use its official name. 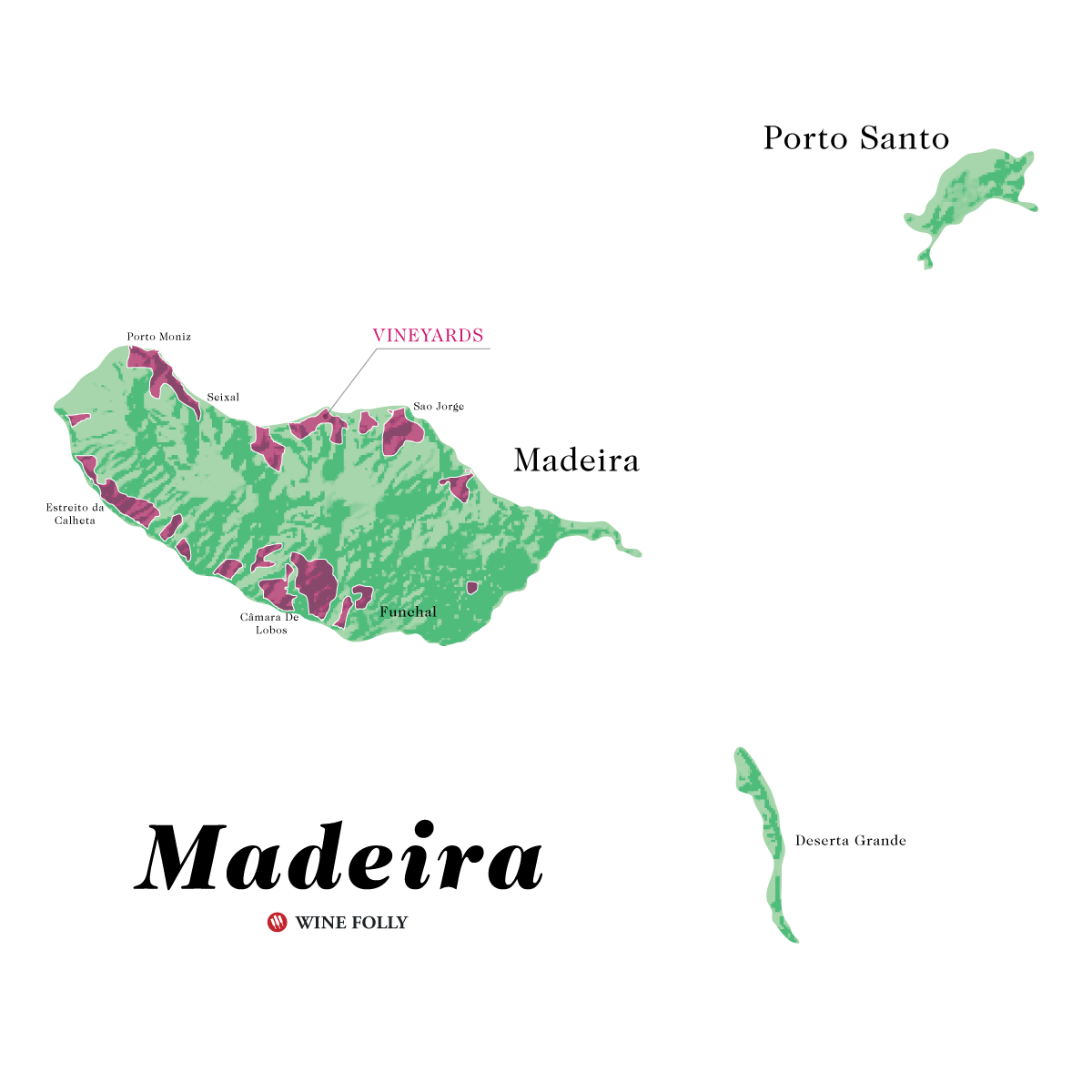 Madeira is a small, rugged, volcanic island found in the middle of the Atlantic Ocean. The wines from this island first rose to fame during the age of exploration when Madeira was a crucial way-point to the Americas.

Madeira was popular during the colonization of America.

What’s surprising, is that over the last 300 years, the process of making Madeira wine hasn’t changed much. So, a taste of Madeira is a sip of history.

Today, modern tools have improved quality and there are several single-varietal Madeira wines that go above-and-beyond what was made in the past. 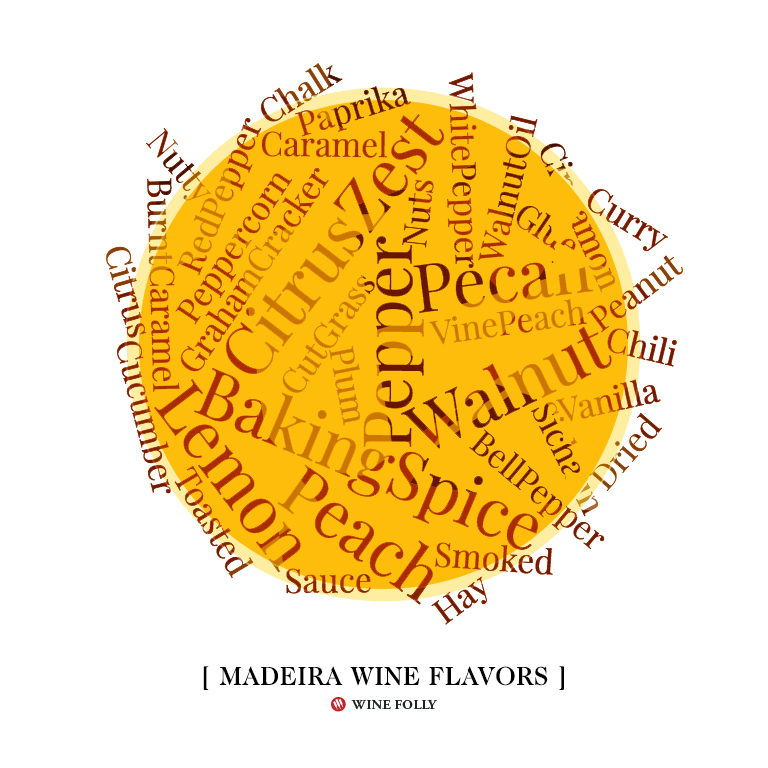 The high acidity coupled with smoky-sweet and nutty aromas make Madeira very unlike other wines. So, for someone used to dry reds, Madeira is a Martian experience. That being said, for those who enjoy whisky-based cocktails or coffee beverages, Madeira has flavor profile that’s well-loved.

Madeira’s unique, woodsy flavors of hazelnut, coffee, walnut, and burnt caramel are created in part by the region’s one-of-a-kind winemaking process. It’s one of the only wines in the world made with purposeful heating and oxidization.

Madeira is a fortified wine which means the natural fermentation is stopped by the addition (aka “fortification”) of neutral spirits. The spirits added are clear, flavorless, vinous (wine-based) alcohols with 96% ABV. It results in wines that range from 17%–22% ABV.

Because of this, you’ll want to serve Madeira in small, half glass portions (75 ml or about 3 ounces).

The complex, rich, and layered character of Madeira makes it a fine substance for deglazing pans, reducing sauces, and adding to dressings. It’s so powerfully flavored that you only really need a splash to make a difference.

Mushrooms are a great partner to Madeira’s sweet earthiness. For this, sauté mushrooms and splash in Madeira before adding in the chicken or vegetable stock to make sauce. Add lemon or vinegar for additional acidity (if needed).

You might also try Madeira as a secret ingredient in barbecue pork!

For cooking, plan to use entry-level, blended Madeira wines (such as Rainwater, Fine, Finest, etc). Open wines can be kept for 6 months or so if stored properly.

With only around 1000 vineyard acres (~400 hectares), Madeira produces very little wine each year. Here are the most common types of Madeira to know (and what to expect).

Rainwater is a great place to start exploring Madeira wine. The style is fresher and fruitier with some sweetness and pale color.

The name “rainwater” is based on a myth that Madeira casks would swell on the beach in the rain while waiting for passage to America. (It does rain a lot in Madeira!) It also could have been clever marketing to describe a former secret recipe, “Aqua Pura,” where wines were diluted with water.

Fortunately today, water is not allowed to be added to Rainwater Madeira. Instead, wines are made mostly with Tinta Negra and Verdelho.

Most Rainwater is affordable and released after the 3 year aging requirement. There are of course, a few exceptions of quality, aged Rainwater Madeiras in the market.

Unusual style of Madeira with bright, lemon and citrus peel flavors in a more dry style.

Sercial is a very rare Portuguese grape variety (also found along Bucelas beach outside of Lisbon.) It makes the most dry and crisp style of Madeira wines.

This is a fantastic choice to serve alongside fish or some of the harder to pair foods like artichoke, asparagus, and split pea soup. Make sure to serve Sercial slightly chilled!

Verdelho delivers similar tart acidity as Sercial but with a richer and more complex body. Expect to get a whiff of exotic pepper spice alongside a sweeter finish.

Also known as Bual, and made primarily with Malvasia Fina grapes, this is a classic collectible Madeira with high intensity aromas of caramel apple, true cinnamon, burnt sugar, and sometimes rubber cement.

Boal is not quite as sweet as Malvasia and as it ages will deliver more walnut, and hazelnut like flavors. You’ll often find this wine vintage dated (called a “Colheita”).

The aromas of rubber cement found in some aged Madeira are from volatile acidity – a component that increases as wines age.

Malvasia is a group of grape varieties which include Malvasia-Candida, Malvasia-Cândida-Roxa, and Malvasia-de-São-Jorge. Despite the fact that they are the sweetest, their savory aromas make the sweetness of this wine much less perceptible.

There are a couple of very rare varieties on Madeira that you might stumble across (if you’re lucky!).

How To Choose Madeira

When looking for Madeira wines here are a few clues from the label.

The fortification process leaves natural grape sugars in the wine. There are 5 sweetness levels in Madeira wine:

How is Madeira Made?

Where Madeira differs from any other wine in the world is its aging process. The things that winemakers try to avoid in every other wine region, Madeira producers do deliberately.

They “cook” the wine.

The wine is heated and cooled dozens of times throughout the aging process. It’s also exposed to oxygen (a winemaking no-no) and often evaporates without being topped off in barrel.

Why does this weird warm-oxidative aging method work? Well, Madeira grapes are picked much earlier which means the juice has much higher acidity than other wines.

The aging process ultimately preserves the wine which is why Madeiras are one of the only wines to cellar for a hundred years or more.

Estufa Method Madeira wine is kept in heated stainless steel tanks called “Estufa” for a period of 3 months to caramelize sugars. The maximum temperature they reach is 50 ºC (122 ºF).

Canteiro Method “Canteiro” is the name of the wooden beams that support the oak casks which the wines are aged in for a minimum of 2 years. Barrels are placed in heated rooms or higher up in the winery (where natural temperatures fluctuate), and sometimes outside in the sun.

The canteiro method is considered very fine because wines caramelize and oxidize at a slower rate, sometimes for as long as 100 years.

Can I Cellar Madeira?

Despite the fact that Madeira are built to age in a winery’s barrels, most Madeira are bottled to be drunk immediately. So, if you’re looking to collect them, be sure to seek out those wines with proper corks. They will most likely be Colheita or Frasqueira / Garrafeira vintage-dated wines.