Italy’s number one sparkling wine comes from Northeastern Italy and uses a different winemaking method than Champagne. The best Prosecco wines are noted from the hilly sub-region of Valdobbiadene.

Prosecco is a super food-friendly sparkling wine that goes fantastically as an aperitivo with antipasto, cured meats, and almonds. Still, you can enjoy Prosecco alongside the main course. Fresh Asian fare such as shrimp fresh rolls, sushi, Pad Thai, and curries are perfect with Prosecco’s bubbles and acidity. Consider an extra dry or dry style with spicy Asian or Indian cuisine.

There are 3 sweetness levels available in Prosecco wine:

The only Prosecco region allowed to use “Extra Brut” on the label is Prosecco Asolo DOCG (with up to 3 g/L or just 0.4 carbs per serving). Learn more about sweetness levels. 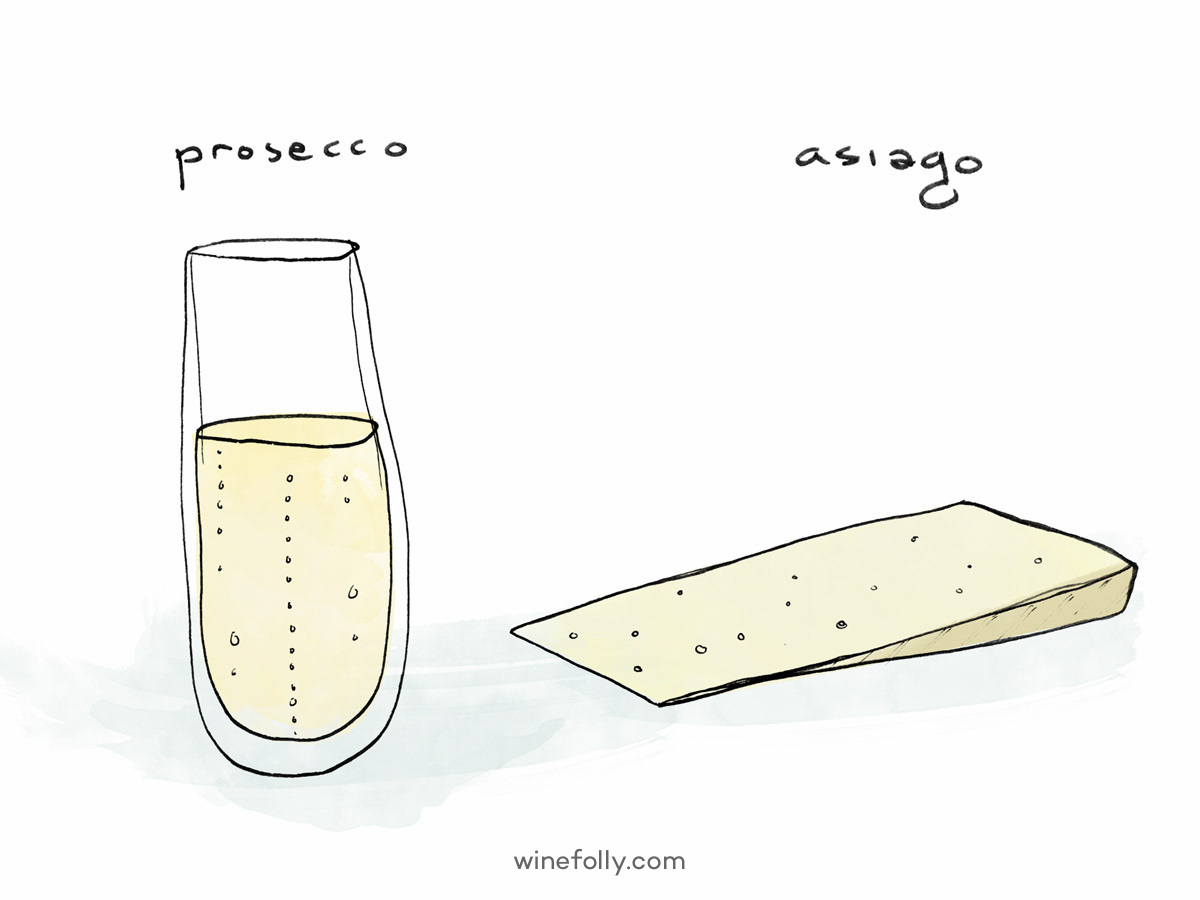 Is Prosecco a Grape?

Originally yes, Prosecco is a grape!

More recently however, the name of the grape was changed to Glera to help further protect the Prosecco region in Italy.

What you might not know is that Glera isn’t the only grape allowed in Prosecco wine! It’s possible to blend up to 15% of the other indigenous grapes that grow in the region. These include names like Bianchetta, Verdiso, and Perera – quite rare indeed! 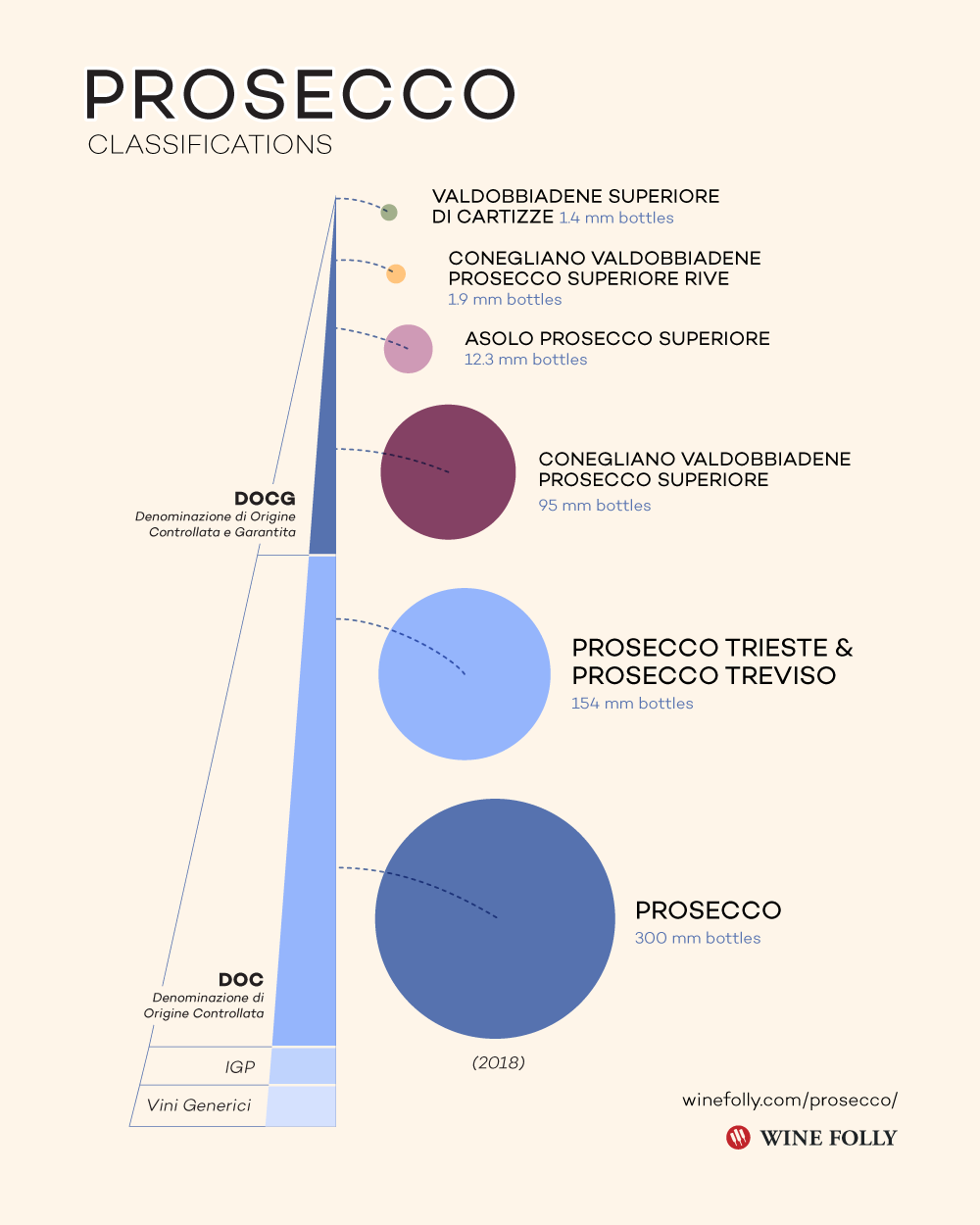 You drink better Prosecco if you learn about the different quality levels printed on the label.

This is basic Prosecco. It can be produced all over Northeastern Italy. Some is great, most is so-so.

These two regional designations are a half-step up from basic Prosecco. These wines are produced in a much smaller area and thus, quality is slightly more controlled.

“Ko-nee-lee-AH-no Val-do-bee-ah-DEN-aye” This area is much smaller and more hilly within Treviso. It also has more strict quality standards. Thus, it earned the right to be one of the 73 DOCG wines of Italy! Within this region, you’ll find some of the best Prosecco, along with two other sub-appellations.

Rive means “bank” or “slope” in Italian and references 43 hilly locales within Conegliano Valdobbiadene that produce exceptional grapes. This sub-region is microscopic compared to the others, and hard to find!

Tooted by most to be the “bees knees” when it comes to Prosecco. This tiny 264 acre (107 hectare) spot is a blanket of hilly vineyards right outside of the town of Valdobbiadene. Cartizze produces a very small amount of Prosecco that is worth a hunt.

This area is rarely talked about but it’s position just below the Piave river (a major dividing line during World War II) makes it a special Italian choice. There are two hilly spots that produce great quality Glera (along with some other very rare grapes) and make great-tasting Prosecco.

Asolo Prosecco DOCG is the only region in the area that allows for an “Extra Brut” style (with only 0.4 carbs per serving). 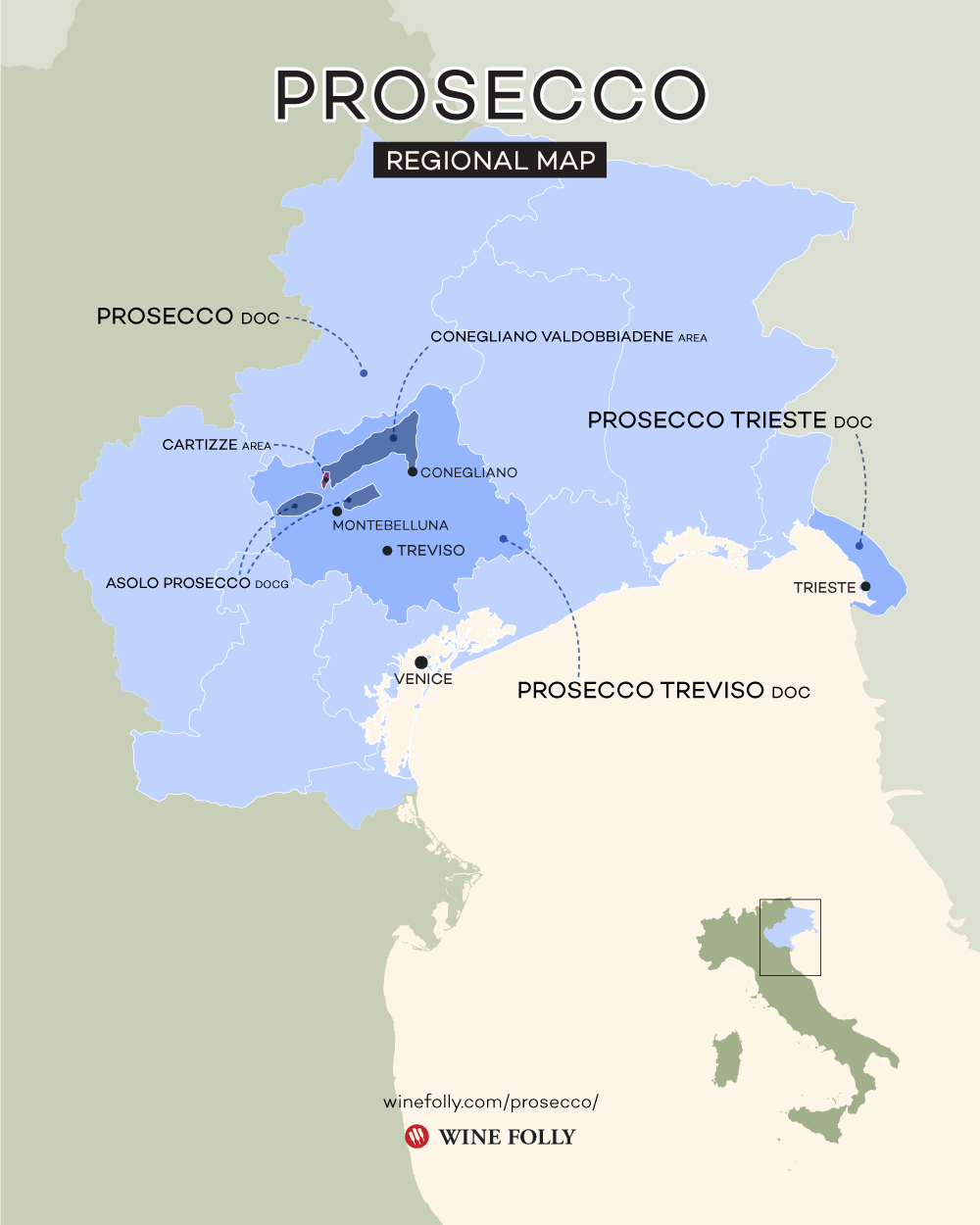 One of the biggest differences between Prosecco and other sparkling wines is how it’s made.

Prosecco uses the “tank method” which enlists the use of some very high tech fermentation tanks. The tanks were first developed during the industrial era in the late 1800s and are capable of producing wines with up to 4 atmospheres of pressure! And, they’re huge!

Base wines and a special sugar and yeast mixture (called the “tirage”) are added to the tank. As the yeast eats the sugar and ferments it releases CO2 which causes the tank to pressurize. Since the pressure has no where to go, it carbonates the wine. Voila! A sparkling wine!

After the process has completed, the wine rests (usually for about 3 months), then it’s filtered, dosed (with expedition liqueur), bottled, and sent to a grocery store near you! 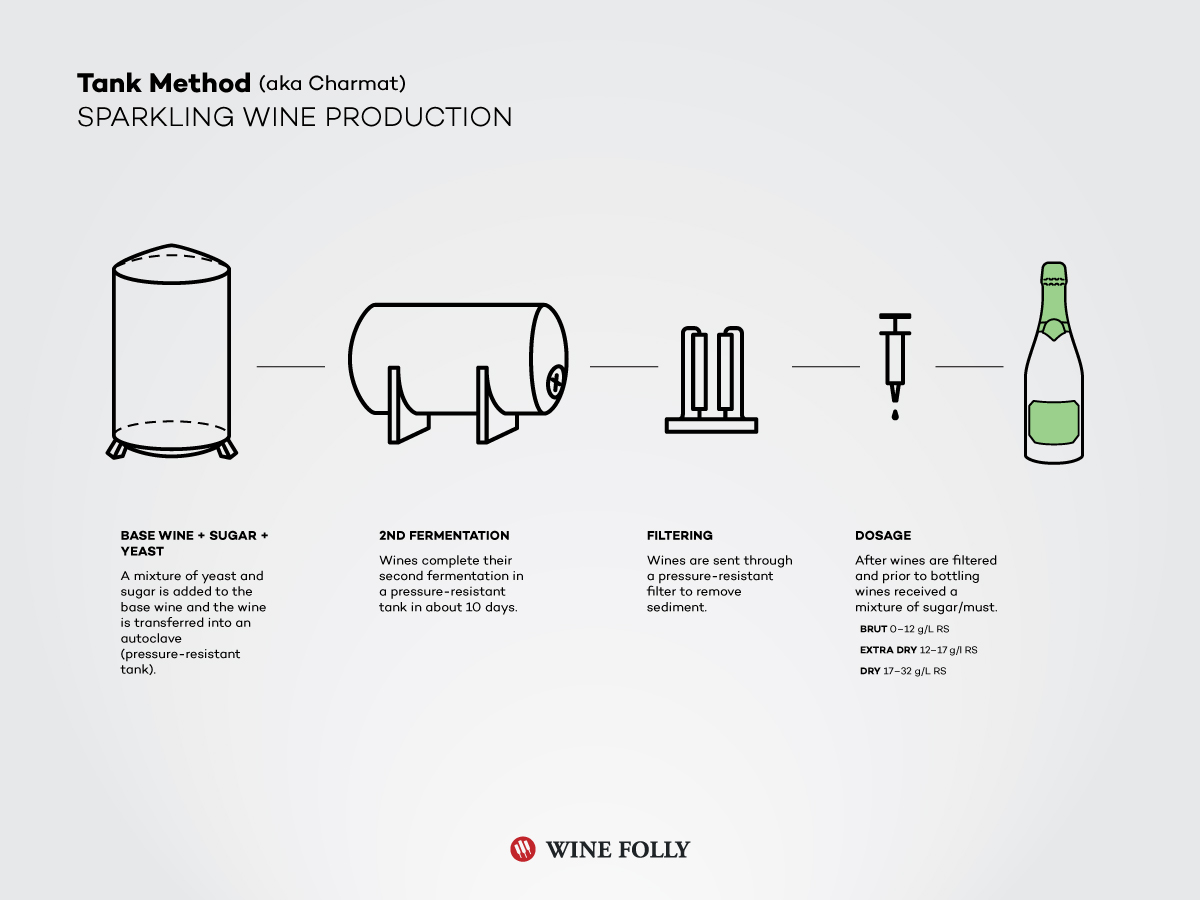 Tank method wines have a much more “freshly made” taste with stronger yeast-dominant aromas. This is why “lager” or “beer” are often used as flavor descriptors for Prosecco.

Still, some producers are very mindful of this process and extend the aging to make a much creamier (and less yeasty) tasting wine. This is one thing to pay attention to when tasting Prosecco wines.