Learn useful information about French wine (by looking at the label) to find out what the wine is made of and what quality level it is.

One of the more confusing wine regions to delve into is France because it’s so hard to know what you’re buying based on the label. Fortunately, you can learn a few facts about French wine and how it’s labeled to improve your ability to find better wines (regardless of price). 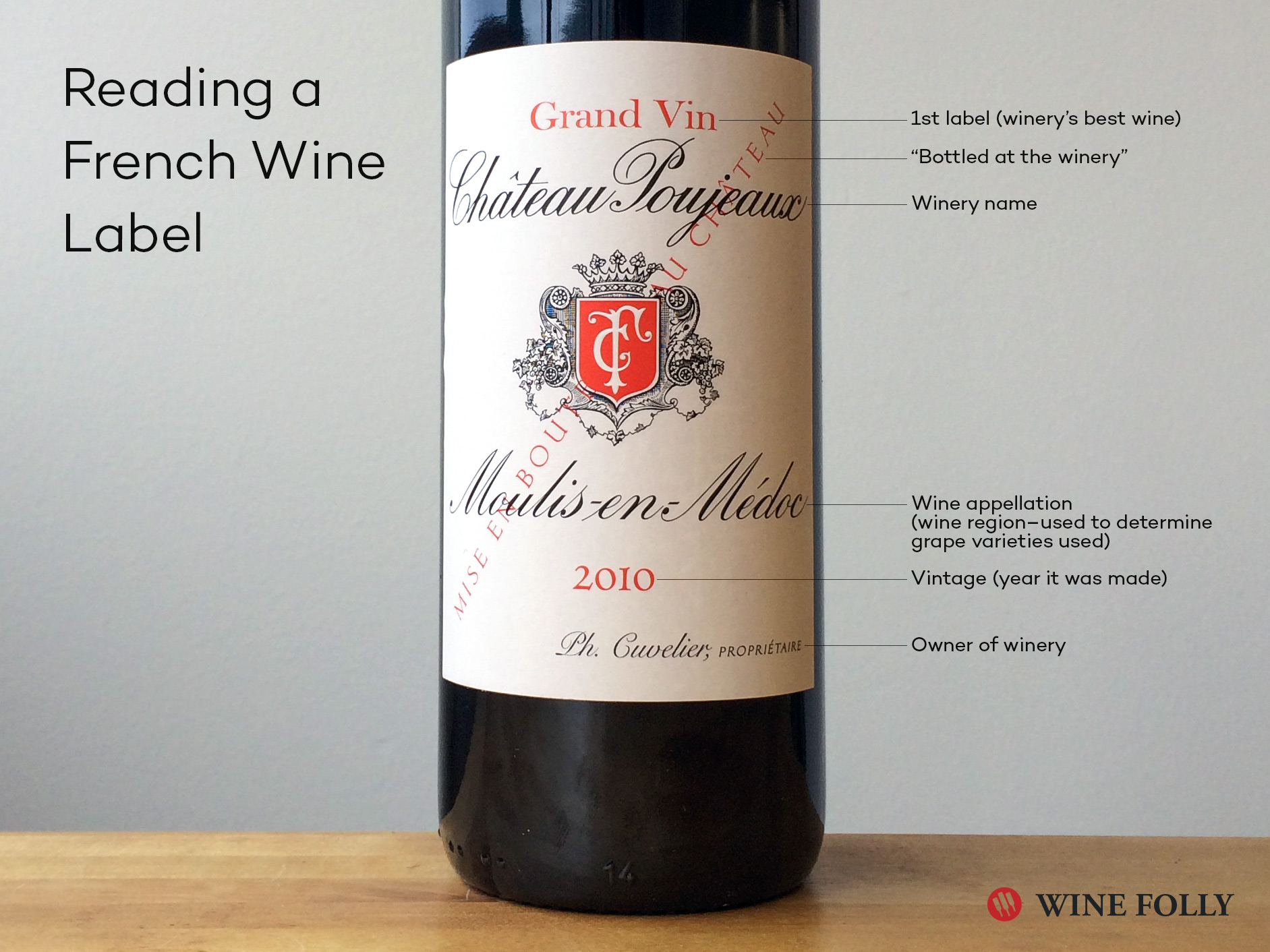 This bottle of red Bordeaux is a blend of Cabernet Sauvginon, Merlot, Cabernet Franc and Petit Verdot.

France labels wines by region and not grape variety. This labeling behavior works well because there are 200+ unique varieties in France and many of the wine regions blend grape varieties together. So, when you look at a label, the first thing to pay attention to (besides the producer name) is the name of the region where the wine originates. This is your best clue to determine what grapes are in the wine. 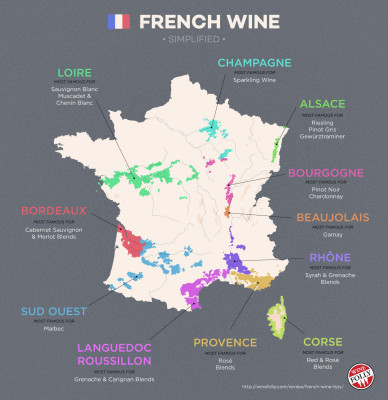 What wines does each French wine region produce?

It’s pretty common for French wines not to be labeled with the grape varieties in the wine. So, it’s helpful to know what major wine grape varieties are produced in each wine region of France. 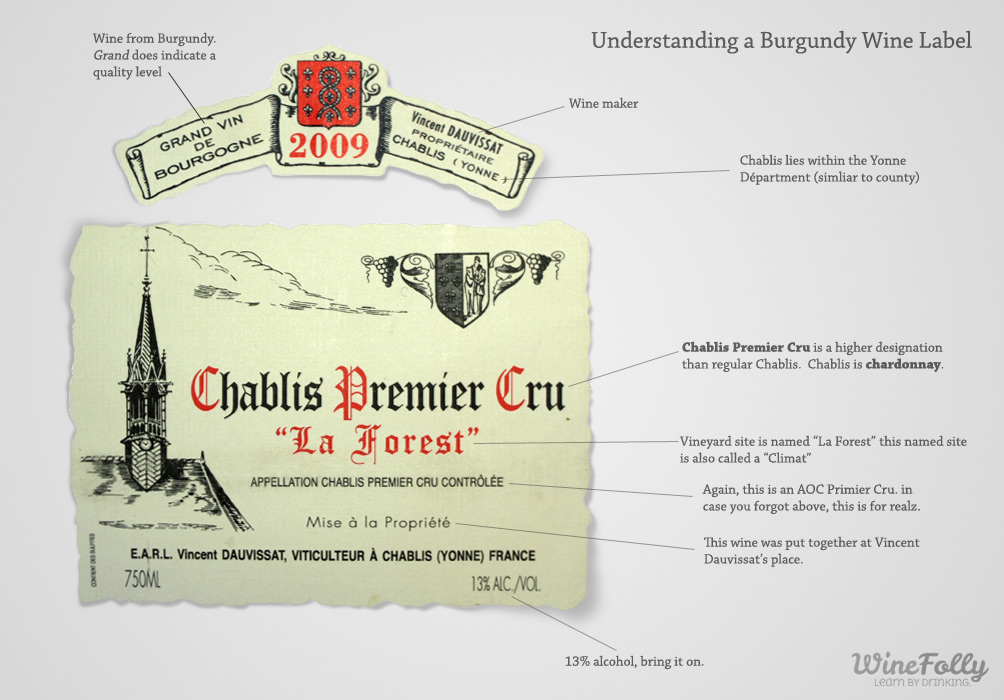 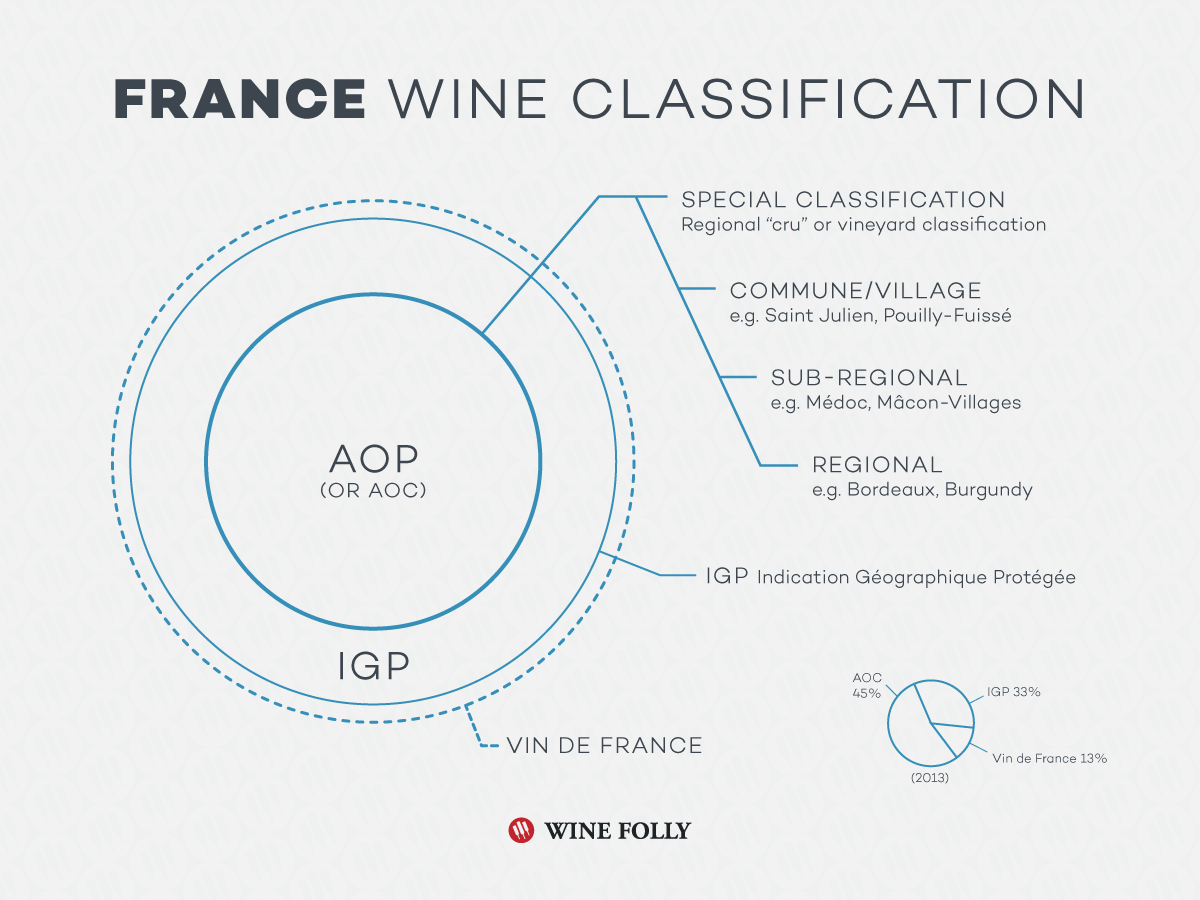 French wines and wine labels are controlled by a wine classification system called Appellation d’Origine Protégée or AOP This system was first developed in 1936 by Baron Pierre Le Roy who also founded the regulatory board for wine in France (called INAO ). AOP is essentially a hierarchical system of rules and regulations that determine where the wines are produced, what they are made of and their level of quality. Generally speaking, the more specific the region is, the higher the rank.

AOP (Appellation d’Origine Protégée): This means the wine came from a specific regulated region which can be a large area (such as Bordeaux) or specific area (Listrac-Médoc–within Bordeaux). Each region has its own rules for allowed grapes, growing conditions and minimum quality. In English, AOP is called PDO (Protected Designation of Origin).

IGP (Indication Geographique Protégée) or VDP (Vin de Pays): An IGP is often a larger area with slightly less regulations as AOP. You’ll notice that IGP wines are often labeled with the grape varieties as well as the IGP zone. The term Vin de Pays is the Pre-EU version of IGP and you will sometimes find wines labeled with Vin de Pays such as “Vin de Pays du Val de Loire.” By the way IGP is the same as PGI (Protected Geographical Indication).

Vin de France: This is the most basic regional quality labeling term for wines from France as a whole. Wines with “Vin de France” can originate from anywhere in France (or be a blend of regions). Vin de France are often labeled by grape variety.