Drinking deliciously aged fortified wine sounds great, but what happens if you haven’t had a bottle in the cellar since you were a teenager? Not to fear, because the makers of Tawny Port have done the aging for you.

All that’s left to do is choose the style that fits your palate. 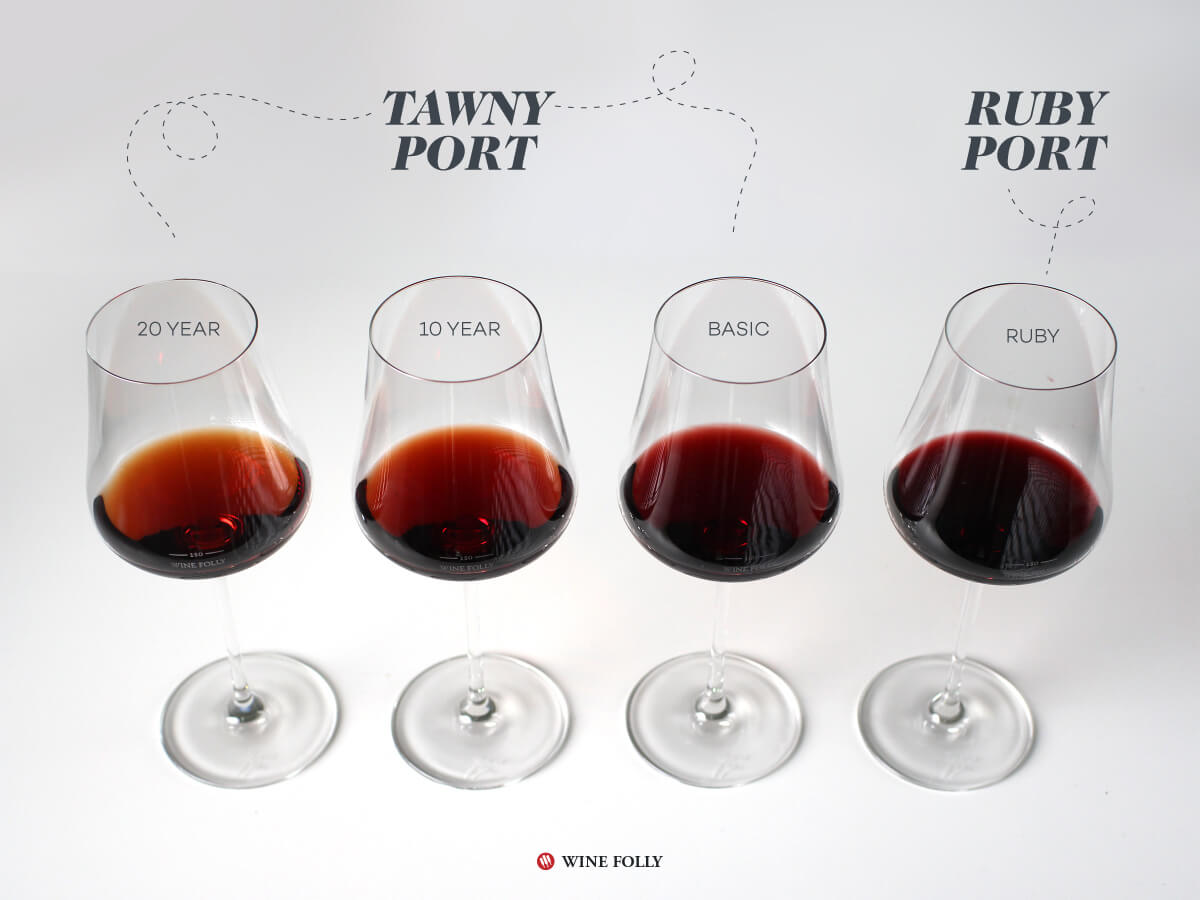 How To Choose a Tawny Port Wine?

People love Tawny for it’s mahogany hue and flavors of caramel, chocolate, dried fruit, and nuts. It’s the whisky of the Port world. And, just like whiskey, much of the flavor comes from aging in wooden casks.

It’s an easy mistake to think that older is always better, but at each point along the life-span of a Tawny Port there are different characteristics.

What’s the “Tawny” in Port?

There are two basic types of port, Ruby and Tawny, they have a lot in common: Both are fortified and sweet, both come from the Douro River valley in Portugal, both are made by the same producers from the same group of approved grape varieties, and both run the gamut of style, quality and price from every day to extraordinary.

Both Ruby and Tawny Port wines undergo a period of aging, from moderate to extreme, depending on the type.

But besides how long the wine ages, how it ages also plays a critical part. Ruby spends less time in wood before bottling, usually in large wooden casks, and maybe even stainless steel. This helps preserve its vinosity (it’s “wine-y-ness”), intensity of color, freshness of aroma, and fullness of body.

Basic Tawny has a barely transparent body, with scents of slightly dried cherry, toasted nuts, and a touch of leather, followed by a light creaminess on the palate and a cacao powder finish.

Young port tends to have fruity aroma and resemble the flavor of young wines, lacking some of the sophistication that comes from the cask aging of older port.

This tawny’s appearance follows the footsteps of the previous one: garnet-red with pinkish-orange highlights, a polished amber shininess, and the transparency of looking through golden-brown sunglasses.

The aromas tend more to tire-tread, burnt orange peel, and nutty toastiness, which opens up on the palate with a fanfare of honeyed fruits and nuts, a lean silky texture, and a long finish.

The 10-year tawny is a blend of wines that were all tread by foot, fermented in lagares and aged in small wooden barrels called pipas.

While it shares the same basic roots with the basic tawny, you realize from the first sip that this Port is in an entirely different realm and that it is nearly impossible to go back to the simpler version. So, let’s move forward.

The appearance is notably paler and more transparent, like faded copper with a bright orange-red glow.

Many of the aromas are similar to those of the previous two tawnys, but subtler, with the addition of pressed flowers, dried figs, Mandarin orange peel, and beef jerky.

While the aromas are enticingly soft and elegant, the palate is surprisingly big and smooth, with a firm mid-palate saline grip and a long praline finish followed by a lingering butter caramel aftertaste.

When you reach the realm of forty, the wine becomes timeless. Keep one thing in mind: as with all the Tawny aging categories, a 40-year-old Tawny Port is a blend of wines with an average of forty years. Some components are less than forty, while others may be significantly older.

You can tell this tawny is old by its brownish tinge. But it has shiny transparency that makes it appear quite lively.

The aroma wafts up out of the glass as burnished leather, tangerine peel, and bubbly caramel. It coats your palate with a soft, almost syrupy creaminess that reveals licorice, dried porcini, bay leaf, and sweetness (and a hint of black pepper) balanced by alcohol.

After you swallow it, the flavors quickly disappear into the ether – until you take another sip. While there’s a clear stylistic connection to the younger tawny, the 40-year-old is subtler, softer, and perhaps more refined.

This port would go quite well with chocolate truffles or Gianduiotti, the hazelnut-flavored chocolates of Turin. But you could go for sweet-salty-creamy-funky gorgonzola and some hand-sliced Jamón Ibérico.

Tawny Port is often regarded as a dessert wine due to the intense flavor and high ABV. It’s commonly served in a smaller glass and portion (around 3 oz.), just under room temperature.

A good rule of thumb for pairing with desserts is that the more intense the flavor of your delicious confection, the older you should aim for your Tawny Port wine.

Desserts with eggs and flour generally aim for 20-year Tawny; fruit or cream based desserts tend to go better with basic Tawny. Try different things, including cheeses, and trust your palate.

How long should I keep an open bottle? Well, until it’s all gone, of course! Thanks to fortification, Port wine can last for a long time even after being opened.

However, once it’s been exposed to air (especially inside a half-empty bottle) it starts to fade. In order to enjoy your Port at its best, consume it within two to three weeks of opening. If properly stored, Tawny with age (anything 10+ years) retains its flavor up to 4 months, according to Portugal’s Douro & Port Wine Institute.

Will my expensive Port get even better the longer I keep it? Yes… no… maybe. First of all, if you want to age a wine, you need good basic conditions in which to do it: cool, constant temperature, moderate humidity, and no light.

A 10-, 20-, 30-, or 40-year-old or Colheita Tawny has already been aged and bottled in the producer’s cellars (there will usually be an indication on the back label what year it was bottled), so it does not need additional aging.

But that doesn’t mean it might not evolve even more with additional time. Vintage Port, which spent most of its development in a bottle without oxygen, can often continue to evolve very positively for a long time after it’s been released, but it is also less stable: Once you open it, the clock is ticking and the sooner you drink it, the better.

While Port might seem a bit complicated, it is very consistent: all of the basic distinctions and observations about the different tawny Port wines we explored can be applied to just about every other quality producer of this unique wine.

Make note, each producer makes a unique style and identity, as well as some proprietary practices, that distinguish their products from anyone else’s.

But in case you’re hunting here are some big Port houses to know:

Take advantage of the time and effort producers have put in and get yourself 40 years worth of wine making in an afternoon of shopping. Tried a tasty port you’d recommend? Give us some tasting thoughts in the comments!