If you’ve had the opportunity to see either of the SOMM films, then you’ve already been introduced to Brian McClintic. We caught up with the Master Sommelier whose started a unique/exclusive wine club that finds him traveling all over the world, creating custom collaborations with his favorite organically-farmed producers. This story is all about discovering Tenerife, the largest wine area in the Canary Islands. You’ll learn about some unique varieties from a very special place. –Madeline Puckette

Wine on Tenerife in The Canary Islands

Where do I even begin… The highest elevation vineyards in Europe reside on a small island. The perimeter of this island houses small, sea level beach towns. In the middle of the island lives a 12,200 foot volcano. It takes an hour to drive from one end to the other, but from village to village, it seems as though you’ve gone to the moon and back. Jungles, deserts, tropical beaches, and mountains…it’s like every ecosystem became an expat and moved here. By rule, Spanish. By influence, Portuguese. By geography, a stone’s throw from Africa. 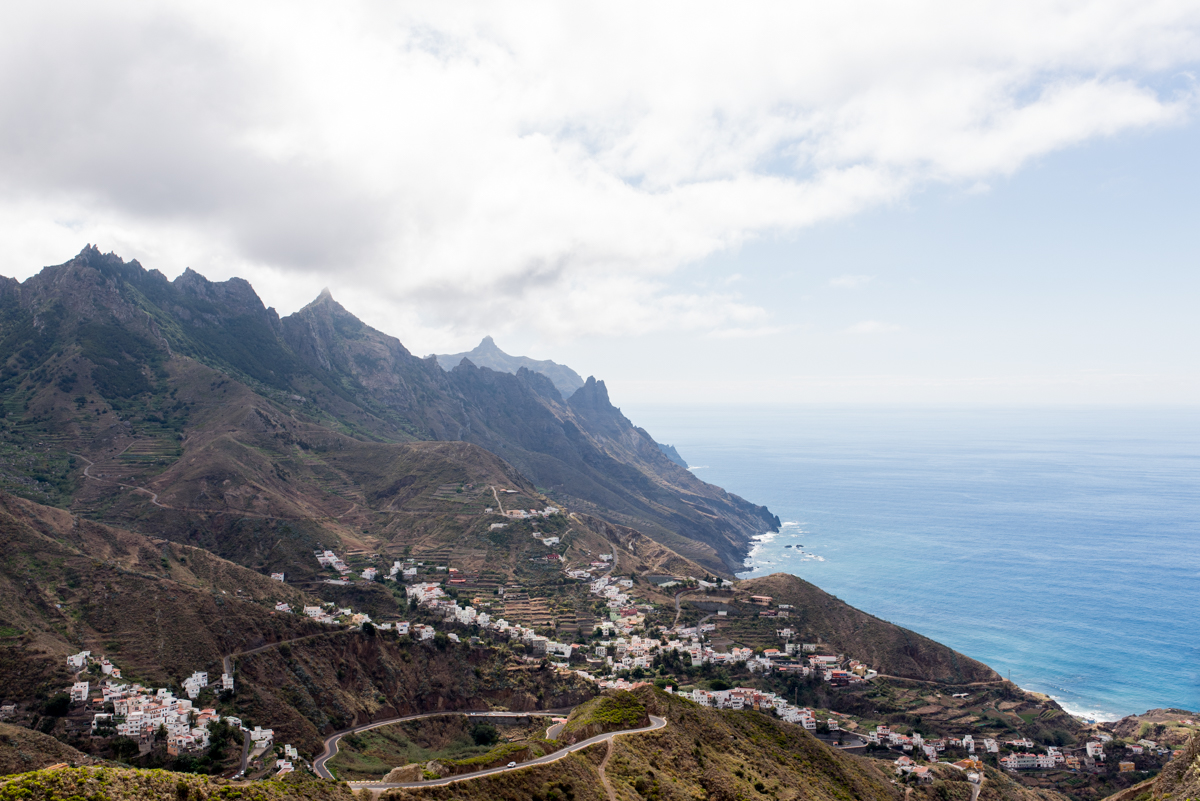 This is a place where passengers break into applause when your plane hits the runway…a place where shopkeepers walk you to a competitor’s store if you can’t find what you’re looking for…
And in the vineyards, 300 year-old braided vines are tied together with dried banana peels…while others are propped up by a kickstand, on cliffsides accessible only by horseback. All this, and Peruvian potatoes. This is Tenerife. 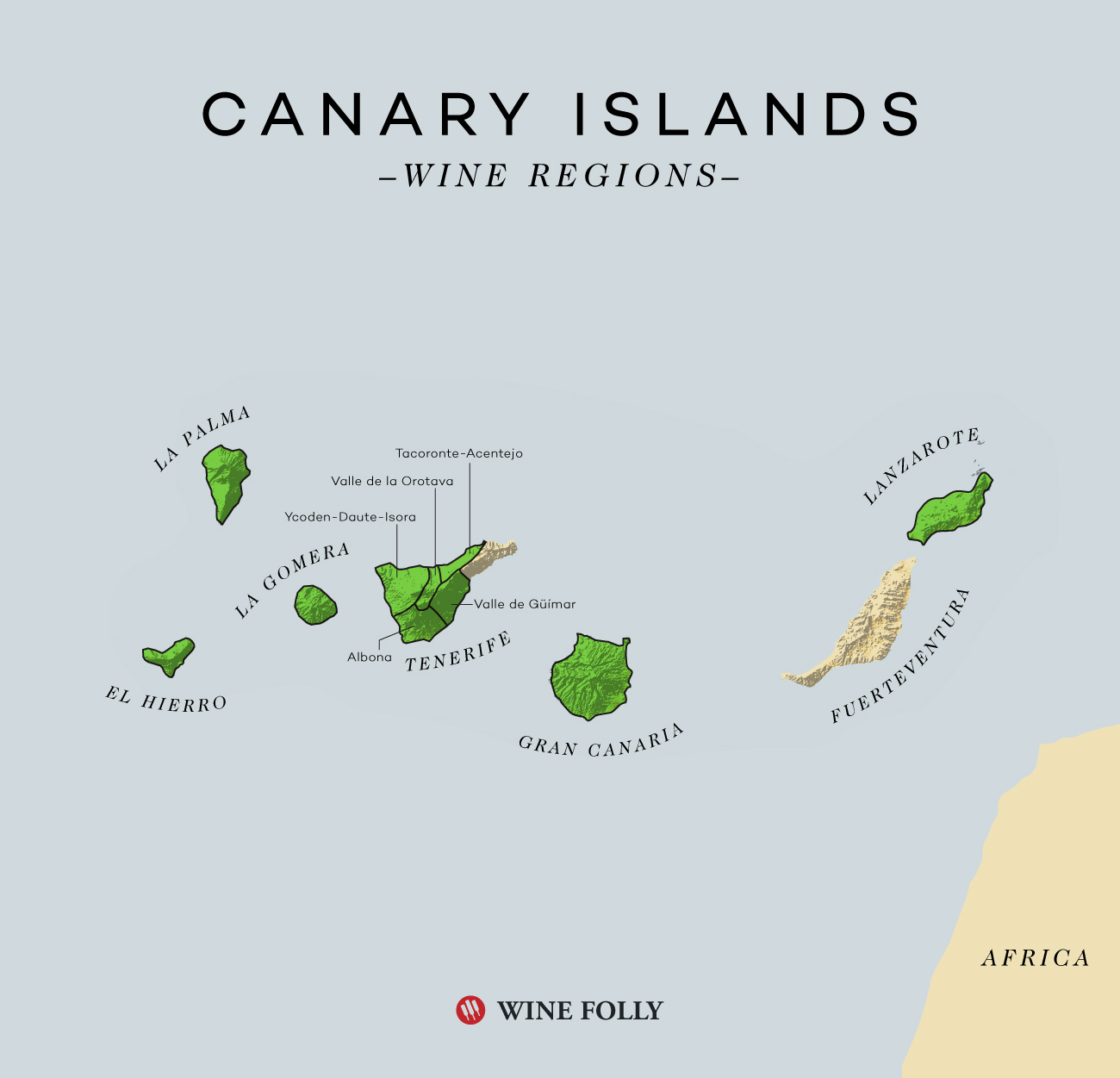 The Canary Islands have 10 official wine regions, five of which are on Tenerife. Map by Wine Folly

Tenerife is one of seven islands off the coast of Morocco, and the largest wine producer of the island chain with roughly 7200 hectares under vine (1 hectare = ~2.5 acres). Only a few places in the world possess ancient, own-rooted vines that never fell prey to the devastating root louse – a little insect we call phylloxera, and Tenerife is one of those few. Phylloxera destroyed 90% of the world’s grape vines, so it’s nice to know that a global pandemic can be cured by isolation. Props, Atlantic Ocean. 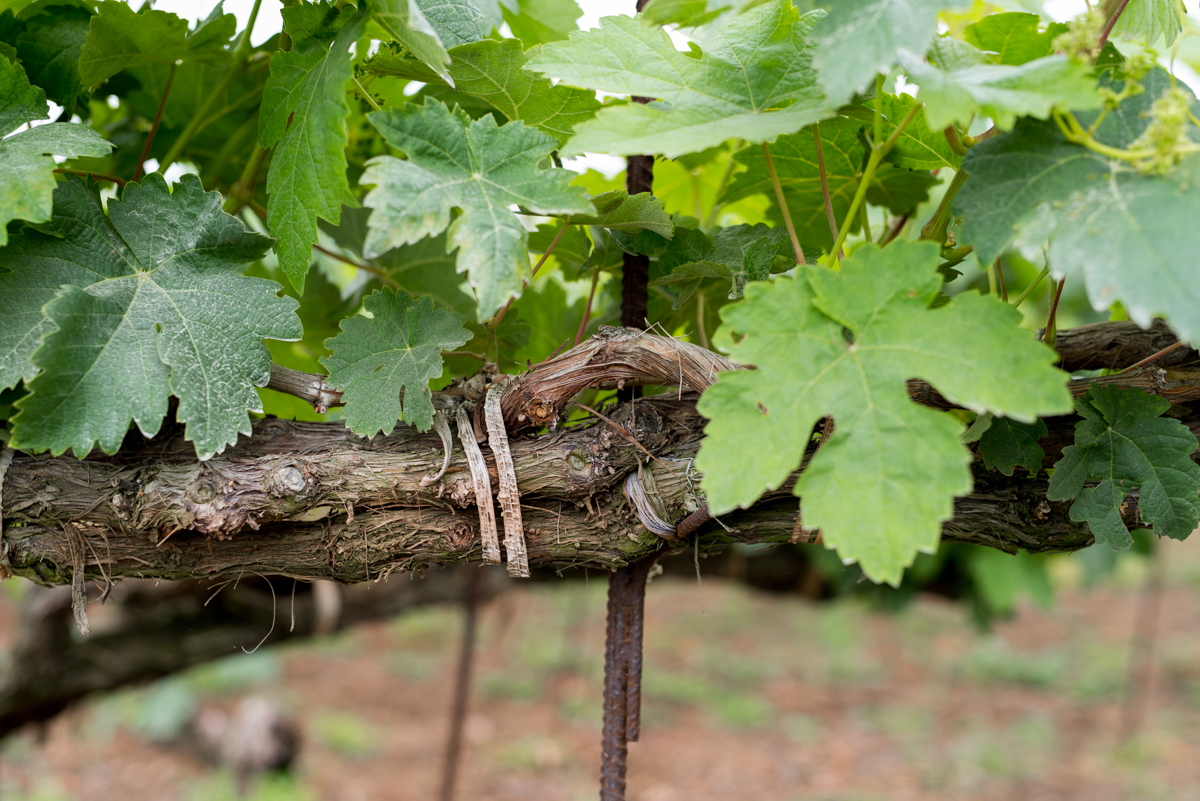 It’s common to see banana peels from the jungles of Tenerife used to train the vines. Photo by Jimmy Hayes

There are enough grape varieties in the Canaries to keep the Darwins of the world occupied. Among them, the three Listáns: Listán Negro, Listán Blanco (aka Palomino Fino, the Sherry grape), and Listán Prieto (the Mission grape, País in Chile and Criolla in Argentina). For red wine lovers, the indigenous Listán Negro is the golden child – proliferating in Canaria at large, but only exceeding expectations in very special plots.

This brings me to my story about how I found a special wine from the Orotava Valley – one of Tenerife’s five DOs (Denominación de Origen). 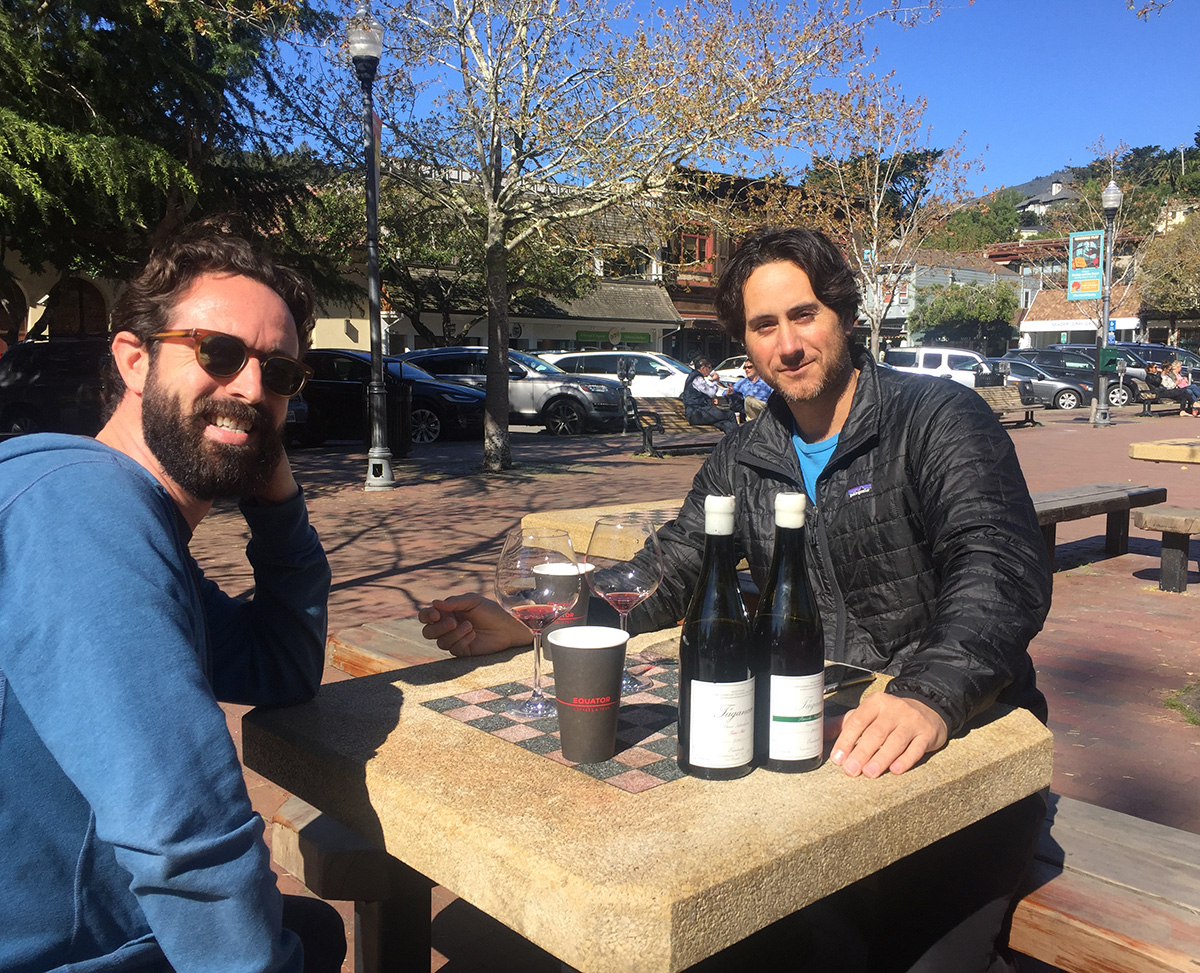 I reached out to José Pastor (left), who surprisingly, lived in the Bay Area. We tasted in the park. Naturally. Photo by Cat Fairchild

How it all started…

When I reached out to importer José Pastor about a winery called Envínate, I had no idea he lived in the Bay Area. It would make a meeting of the minds all too easy. On a park bench in downtown Mill Valley, José ran me through the Envínate range, while Marin moms in Patagonia gear whizzed past us pushing strollers.

The first wine we tasted was a field blend from a place on the northeast part of Tenerife, called Táganan.

Field Blends: Field blends are like a Witch’s Brew. You’re basically throwing a bunch of different grape varieties in a bubbling caldron and watching them co-ferment together.

Me: “A field blend huh? What grapes?”

The list of grapes got progressively more obscure and finished with,

Jose: “Oh, and there’s some other things in there as well.”

Me: “Ok, this is insanely delicious, but why field blends? Why not vinify the varieties separately to see what they are capable of on their own?”

José: “In Táganan, not possible…” 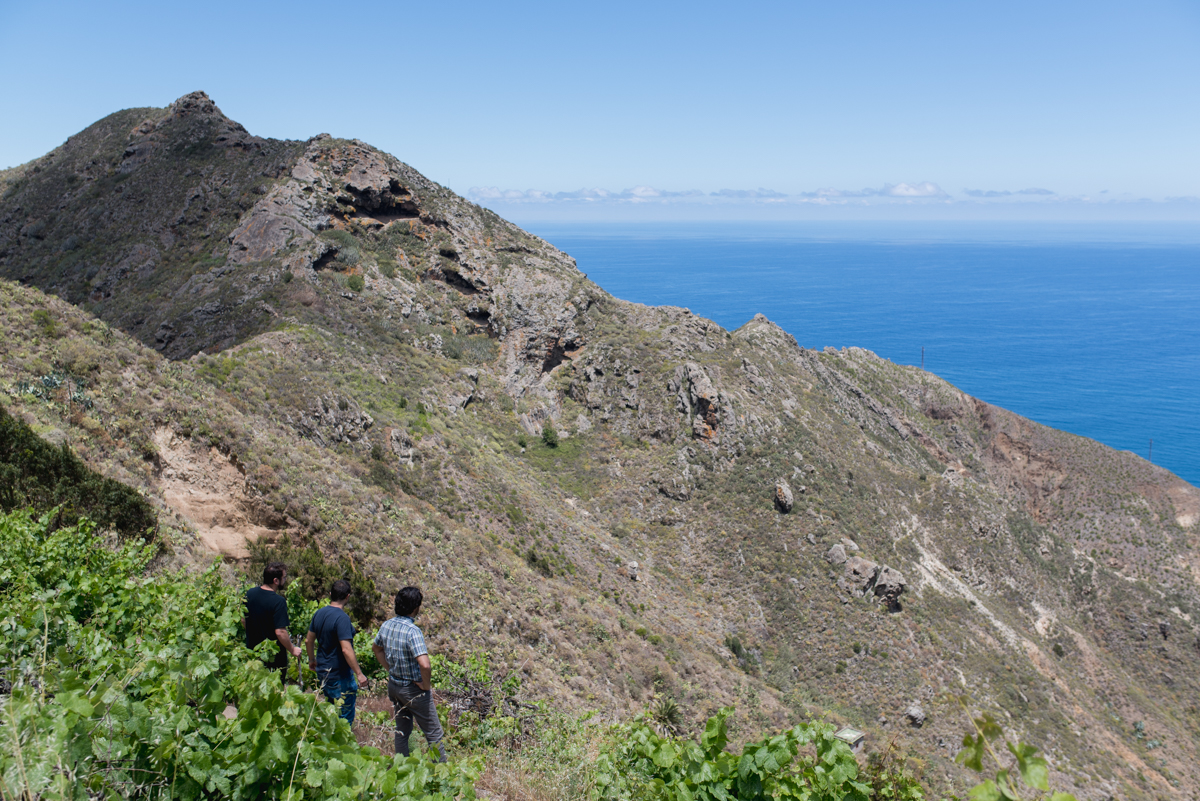 “I’m staring down a 65+ degree pitch with no footholds.” Photo by Jimmy Hayes

The view ain’t bad. It’s easy to see why tourists flock to take photographs, prompting Envínate’s Roberto Santana to put up poison signs to keep the rubberneckers from eating the grapes.

I meet Roberto. Roberto is a Tenerife native who was once warned to stay away from Táganan saying, “Don’t complicate things.” Challenge accepted.

I’m staring down a 65+ degree pitch with no footholds.

Me: “How on earth do you work these vineyards?”

Roberto: “This one’s easy. It’s close to the road!” 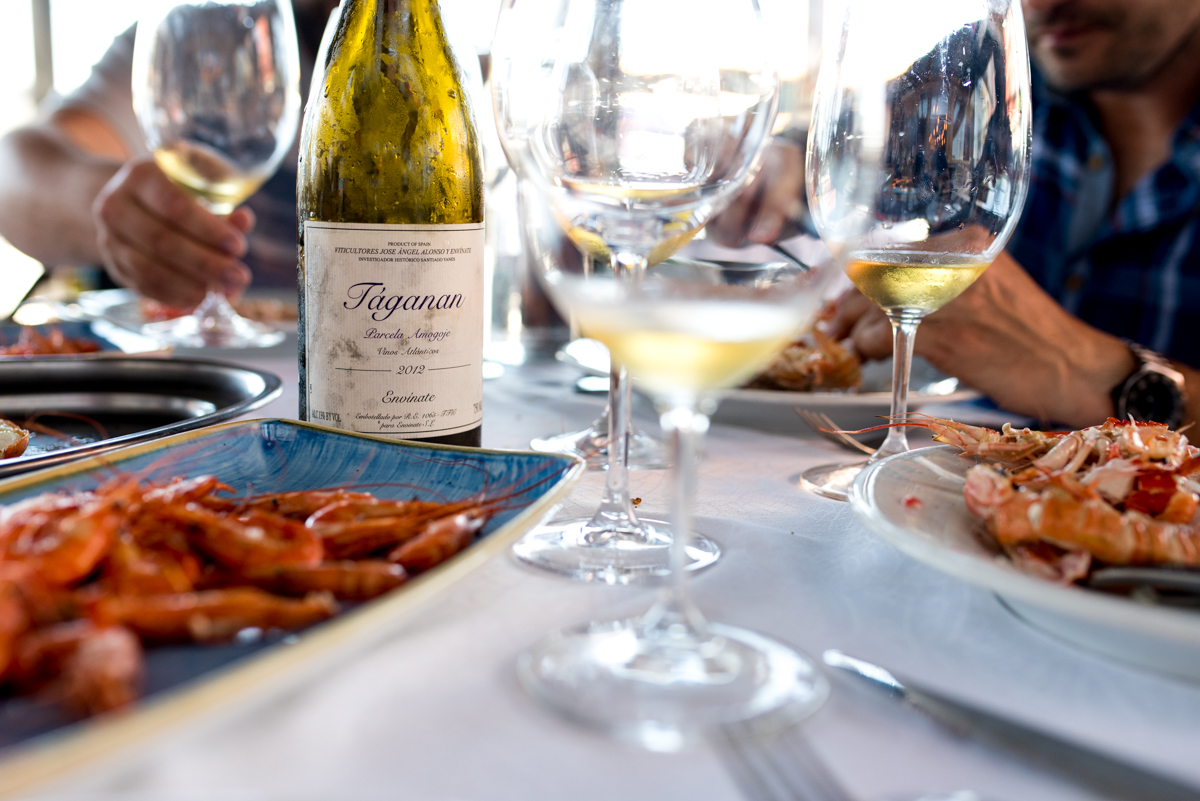 Táganan is like a world trapped in amber. Ancient vines sprawl every which way like wild shrubs – each one is a different variety. Walking through these vineyards felt like foraging, or better yet, digging up fossils. Jimmy Hayes couldn’t stop clicking photographs. I remembered my conversation with José in Mill Valley. He was right – there would be no single-varietal wines on this side of the island.

Envínate’s Tenerife project has several bottlings. It’s flagship Táganan vineyard is called Parcela Margalagua or “mother of the water.” It’s a cooler area (for the Canaries), with vines that are at least 100 years old. I tasted one of just 600 bottles produced of Margalagua with José, following its arc over three days. Never in my wildest dreams did I imagine such a serene, seductive, red wine, born in such a violently rugged place.

As good as Margalagua was, I knew I wanted to work with a single variety for Viticole. Heading west to the Orotava Valley, we would strike gold. 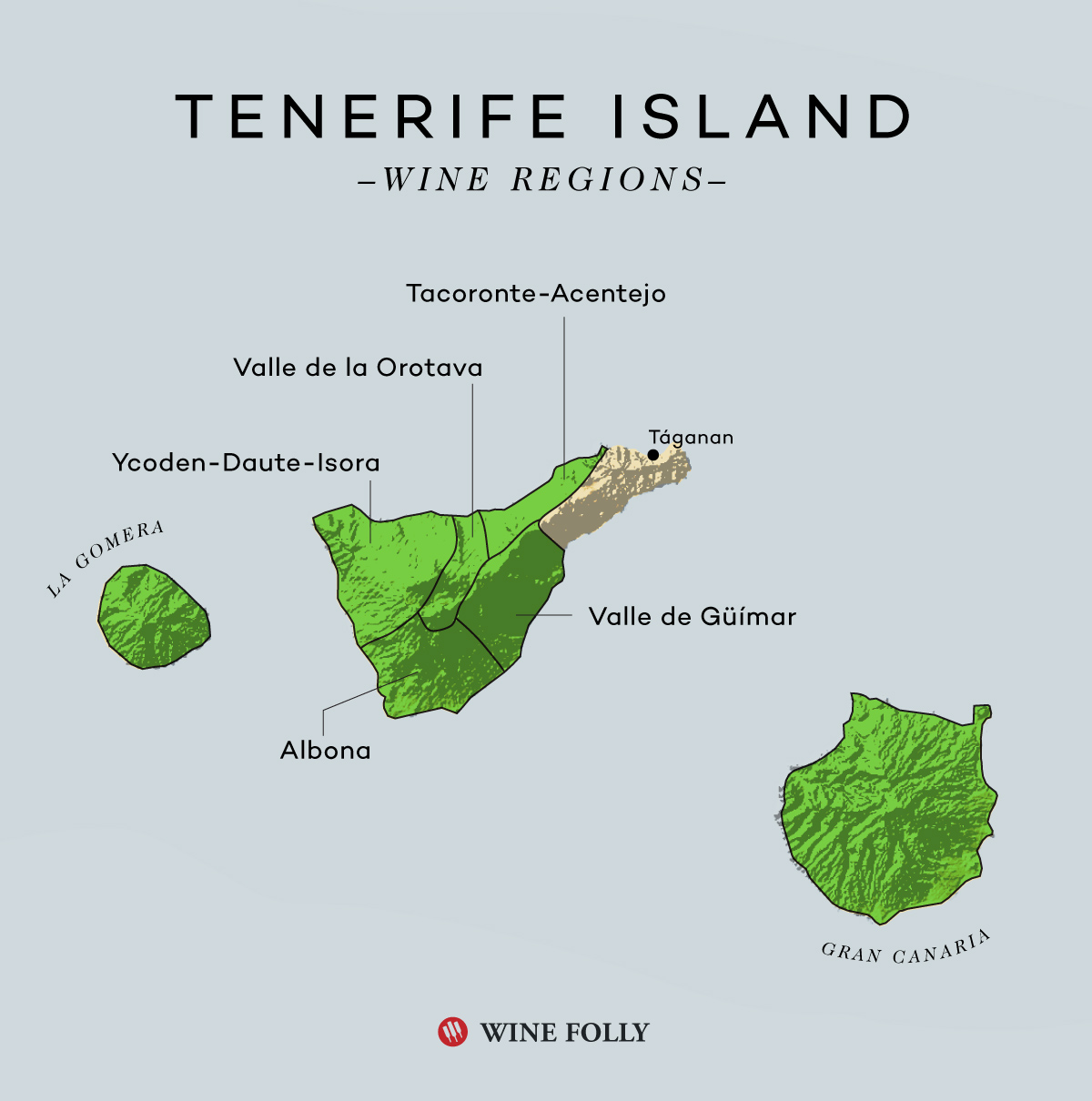 Tenerife is the largest wine producer in the Canary Islands, with five official DOs. The Orotava Valley is lush. Map by Wine Folly

Tenerife is split into five D.O.’s (denominated regions). The Orotava Valley is just one of them. The Orotava Valley – a lush garden of a place, comprising about 9% of the island’s vine acreage. From the surf, Orotava starts in the middle of the North shore and winds its way up in elevation into the mountains. At every 100 meters, the temperatures get cooler and the top soil gets a little more shallow, exposing black volcanic earth.

I saw “La Habanera” before I tasted it. But let’s work backwards. Bodega Envínate is holed up in Santiago de Teide, a place more akin to a Spaghetti Western than a tropical paradise (the majority of the greenery is comprised of cacti and aloe plants). In the cellar, we ran the gauntlet of ’16s out of barrel. Across all the reds, a note of pepper was apparent. That same smell seemed to linger in the air everywhere I went, although Roberto gives credit to the volcanic soil. Regardless of origin, spicy notes reared their head across grape variety. But when we came to a barrel of Listan Negro marked “La Habanera,” time stopped.

I’ve been jolted by wine plenty of times. There’s good jolt and there’s bad jolt. Bad jolt happens more often than I’d like (synonymous with bitter beer face). Good jolt is rare. Even at just 12.6% alcohol, “La Habanera” jolted me. It is hard to put into words because I can’t compare Listan Negro to anything other than a very distinctive island wine with electric energy. Enough electricity to, well,…jolt you!

I call this kind of wine a “light socket wine.” 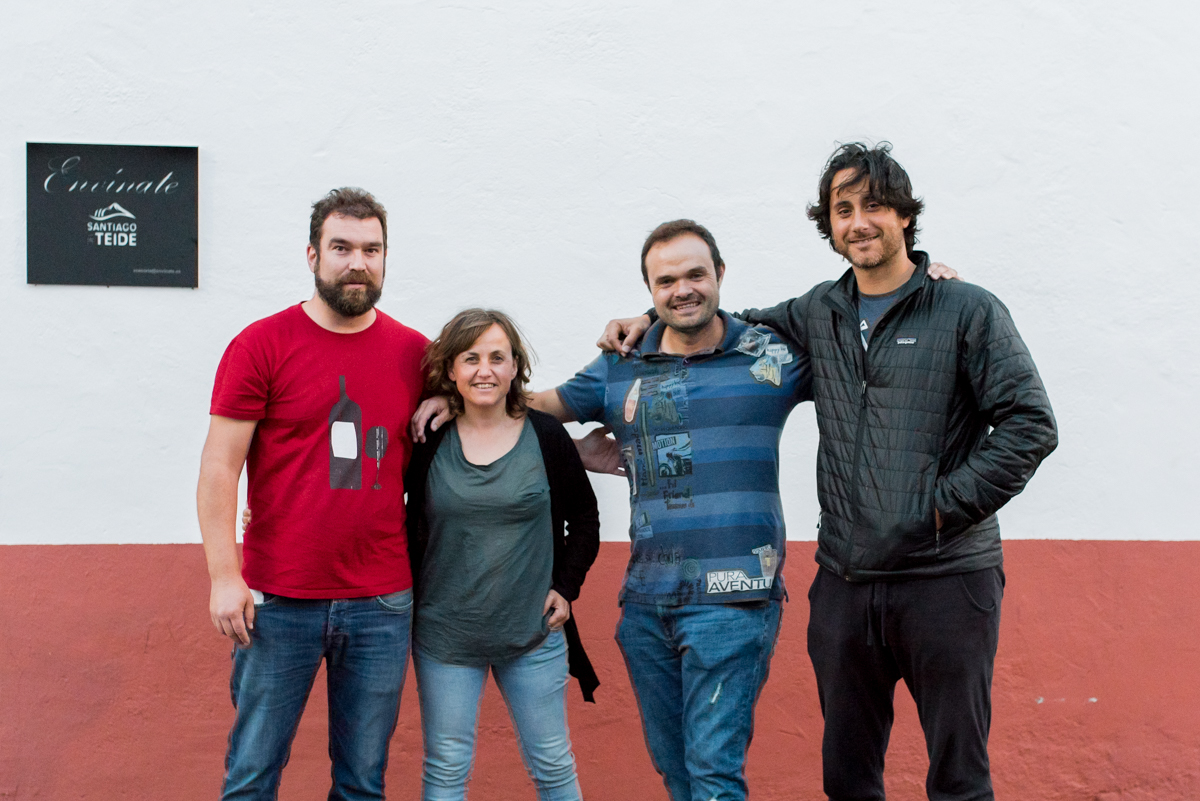 MAY 26, 2017: GOODBYE SUPPER
At our last dinner together, at Roberto’s father’s restaurant, we gave place a rest and focused on people. The night ended customarily for our group at 5am. But not before each person went around the table to say a few words. Isn’t it amazing how in the right company, a group of individuals can bond almost overnight? Alfonso said it best, “What is good wine without the company?”

Yet, for all it’s rugged, breathtaking terrain, perhaps the most staggering aspect of Tenerife is its humanity. Island culture tends to exist in extremes; either people are as isolated as the place or they are dripping with the “Aloha spirit.”

There is a palpable sense of community here that is far from the dollar-driven society I swim in. From viticulturist Jose Angel Alonso, who farms Táganan alongside Envínate, to the families who’ve owned these vineyards for generations. They all pitch in…all help…without a thought.

This was my first trip to Spain, but certainly will not be the last. I will visit Tenerife each year, to continue to be touched by these people and this place…if I can survive the long Spanish nights.

Brian McClintic, Master Sommelier and star of SOMM (2013), is on a passionate journey to discover special wines from special places at Viticole Wine.