On the hunt for the best wines from Priorat? This tiny but renowned red winemaking region located just south of Barcelona, Let’s explore what makes this region so unique, and what to look for when seeking quality.

Those of us who have an obsession for bold red wines gravitate to places like Priorat: a tiny mountainous region, rugged and dry, pretty much unsuitable for any other crop, except for wine grapes and olives. Add to this situation the intense love of the Mediterranean sun, and Priorat ascends to the top of the rich, ripe red wine pantheon.

The future for this big-red-wine lovers mecca wasn’t always secure. Priorat had all but disappeared as a wine-growing region by the mid-1970s, due to the fascist dictator Francisco Franco’s subsistence-based agricultural policy and the region’s remoteness.

Inspired by French quality winemaking and the dramatic nature of Priorat’s vineyards, a handful of winemakers decided to reclaim Priorat for quality wine in the late 1980s. They took a risk and attempted to make a great wine in the mountains outside of Barcelona. Lucky for us, their ambition worked wonders.

Priorat isn’t exactly new to winemaking. The region has a record for winemaking since the creation of the Cartoixa d’Escaladei Priory in 1163 (Escaladei means “ladder to god” in Latin). Carthusian monks who had learned vineyard techniques in Provence, France tended the land in Priorat for nearly 700 years until in 1835, when lands were claimed by the state and redistributed. By this time, Priorat was large and well known for winemaking (with somewhere close to 12,350 acres/5000 hectares of vineyards). Then, in the late 1800s, phylloxera hit the region and devastated the vines, causing the region to collapse and depopulate. While the government had made Priorat an official D.O. (Spanish official wine appellation) in 1954 it wasn’t until 1989 (with less than 1500 acres of vineyards), that things started to change.

With investment and interest inspired by the original five Clos, there are now 4,696 acres (1,900 hectares) of vineyards with nearly 100 wineries (and 600 growers). Amongst the new group, several producers have adopted the term Clos in their name to champion the idea of site-specificity. 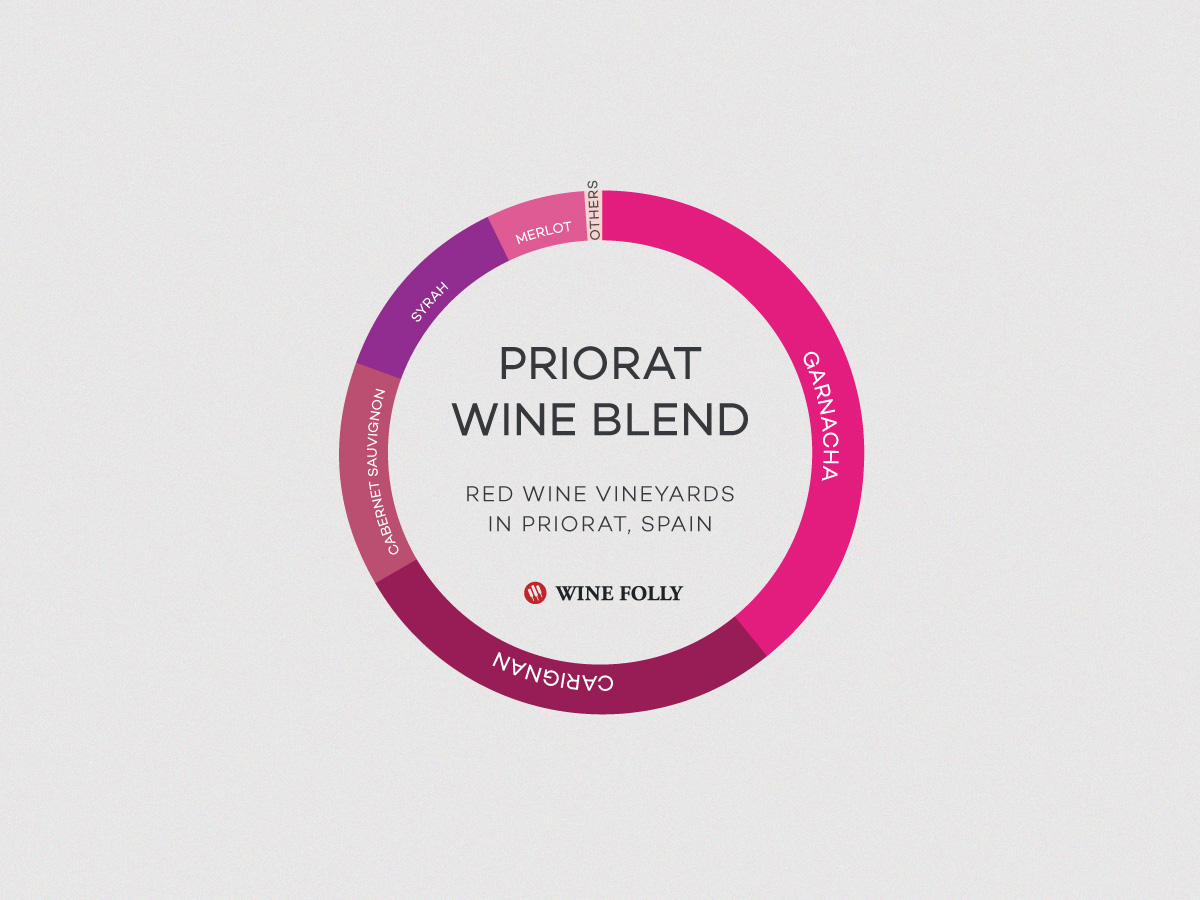 The vineyard plantings in Priorat are approximately 39% Garnacha (Grenache), 27% Cariñena (Carignan), 14% Cabernet Sauvignon, 12% Syrah, and 6% Merlot. The blend of each Priorat red varies depending on the producer.

The dominant vineyard plantings in Priorat are Garnacha (aka Grenache) and Cariñena (Carignan). These two grape varieties provide the backbone of nearly all Priorat reds, although no minimum or maximum of any variety is required by law. And, while young vineyards of Cariñena aren’t known for quality winemaking, many of the Cariñena bush vines in Priorat are 90-plus years old, concentrating the crop load and makes for very intensely flavored mostly red-fruit driven wines.

Stylistic Differences: Each producer has a different focus in their blend of Priorat varieties. Generally speaking, the Cariñena and Garnacha dominate wines have more red fruit notes, whereas the French varieties add deeper black fruit characteristics.

The other grapes that combine to create the Priorat blend are French imports, including Cabernet Sauvignon, Merlot, and Syrah. Tiny parcels Cabernet Franc and Pinot Noir exist here as well, but find their way into very few wines. This new vision for fine wine from Priorat was lead by René Barbier, whose family and winemaking ideologies came from around Gigondas in the Southern Rhône of France shapes, and may explain why Rhône varieties are used so frequently. While some might dispute that these grapes are foreigners in Spanish soils, the various blends of Garnacha, Cariñena, Syrah, Cabernet Sauvignon, and Merlot from Priorat are all at home in Spain as well. 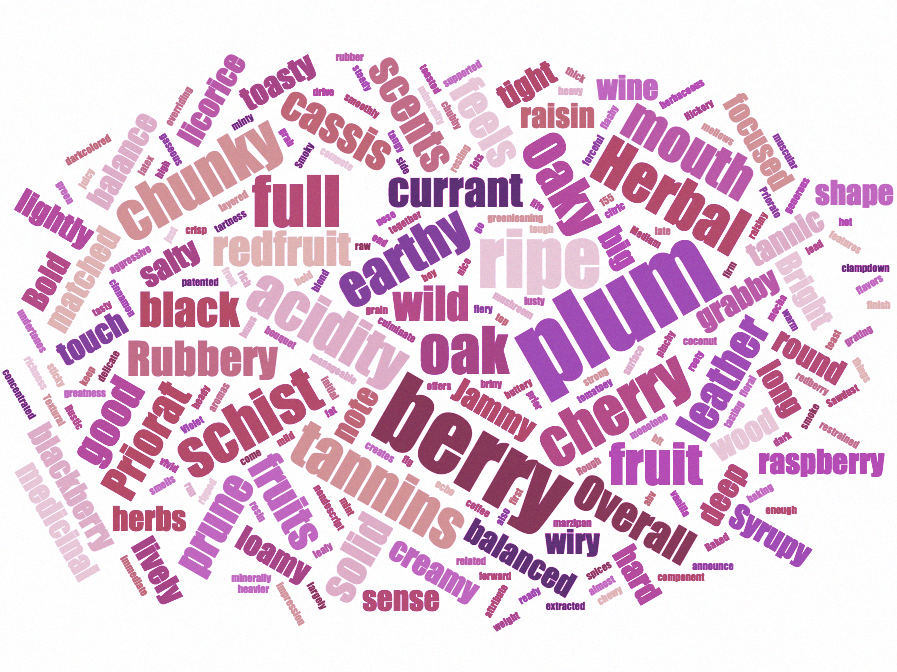 Sun-dried red and black plum, black cherry, and cassis (red and black currant) dominate the aroma profile of high-quality Priorat red wine. Beyond the fruit, you’ll notice a distinct, “black stone” or “hard rock” minerality that some experts relate to the iconic llicorella slate soils of the region. Descriptions of the aroma can include freshly wetted summer pavement (“petrichor”) with a little bit of wet clay thrown in: what you might imagine smelling while riding a cyclocross bike during a summer rain.

The typical structure of Priorat offers soft, moderate acidity matched with big, brawny tannins, and relatively high alcohol (usually in the 14% and up ABV range). Additional flavors might include some saline (Maldon or smoked salt) and spiced (cinnamon, cardamom, molasses) notes, often with a somewhat herbal-minty or licorice-anisette finish. The finer the Priorat, the more harmoniously intense and polychromatic the taste profile will be, often traveling through several different stages of flavor (i.e., fruit, to savory, to spiced).

Expect to spend: If you want a great Priorat, expect to spend in the realm of $40–$60 (top producers are often much higher). For a decent example, $20–$30 is about average; below this, quality is hard to find. Farming here must be done by hand, and the wines often see new oak, which explains the high starting price.

FACT: Priorat also makes very richly flavored whites and rosés, but they’re much less frequently seen and are produced in far smaller quantities than the reds. 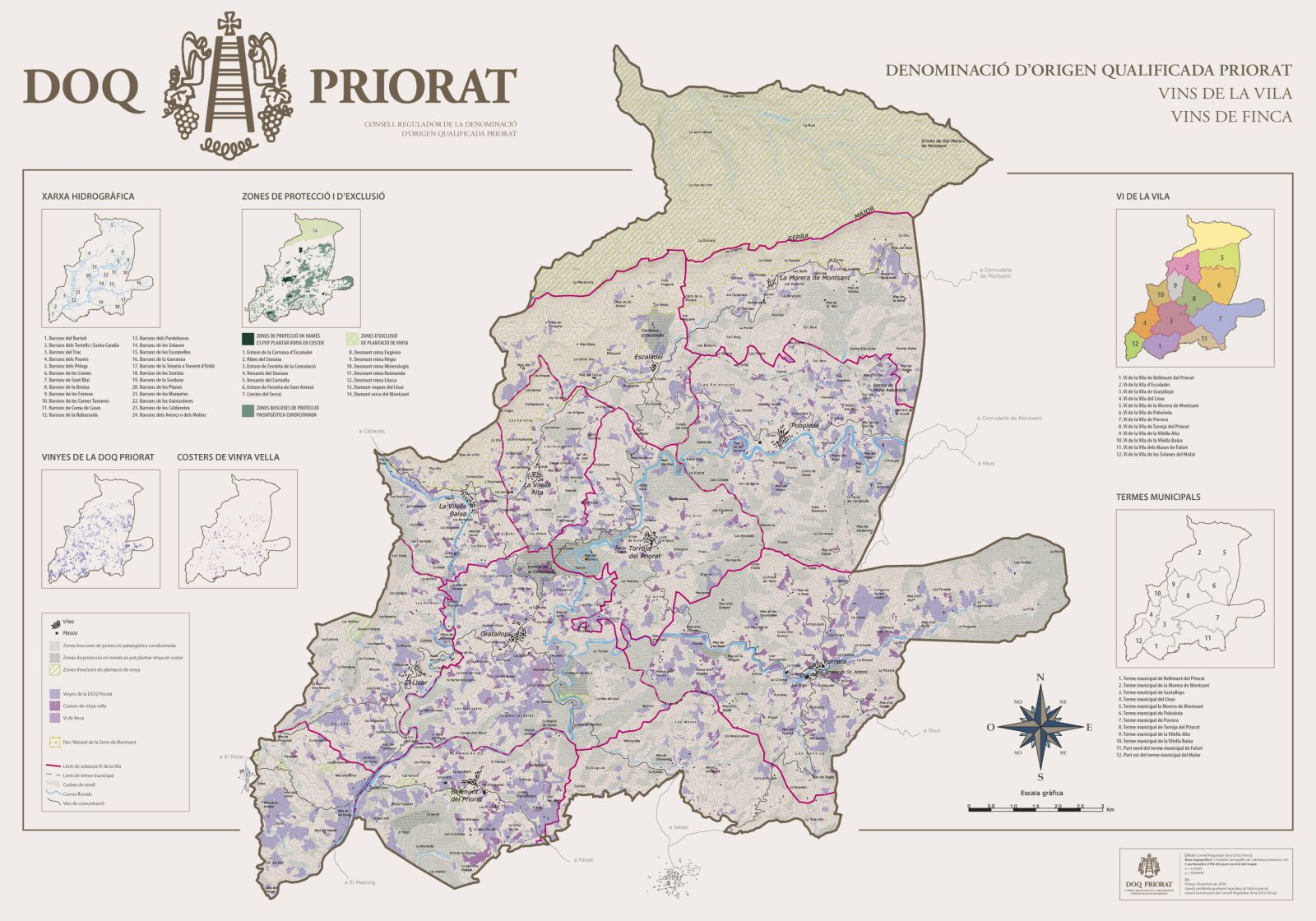 Vineyards are denoted in purple, and the deeper violet zones indicate areas with many old vines. Map courtesy of doqpriorat.org

The 12 sub-zones of Priorat are named after different local villages. You may see Priorat wines labeled as a “Vins de Vila” from one of these specific zones. Keep in mind most wineries are located around the largest villages of Gratallops, Porrera, Poboleda, and Torroja, but great quality can be found throughout the region. A detailed look into the regulatory document on DOCa Priorat shows that the 12 villages can be grouped into 4 primary taste styles.