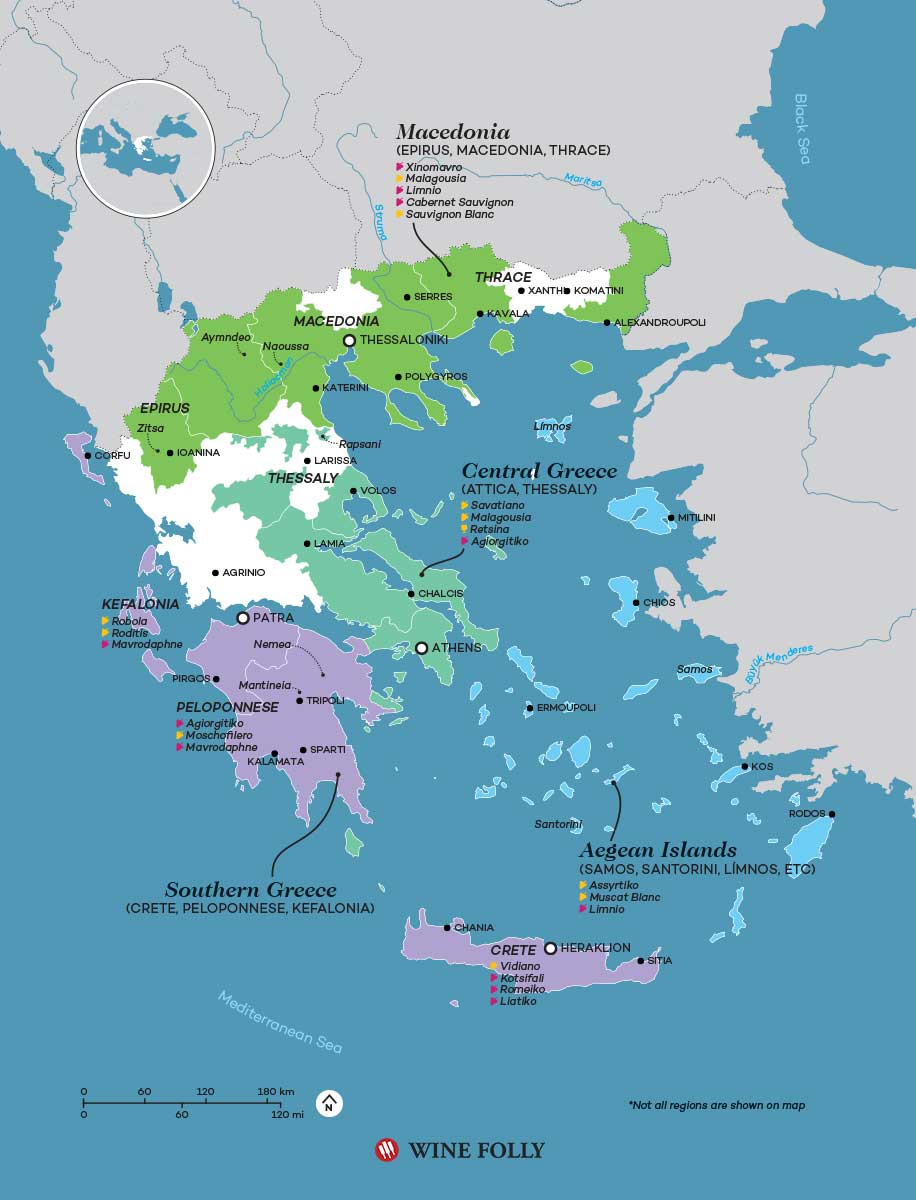 Jump into Greece and its wines - among the oldest winemaking areas on earth, Greece has 11 winemaking sub-regions cultivating native grapes Assyrtico and Agriorgitiko, among smaller plantings of French varieties.

Food wines of all kinds.

The secret to understanding Greek wine is appreciating the intensity of flavors found in Greek foods – intensity is a theme in Greek wines as well!

Northern Greece is known for elegant, savory reds as well as fresh and fruity whites. Xinomavro from Naoussa is often called “the Barolo of Greece,” because of its high tannin and acidity. Assyrtiko, Malagousia, Debina (from Zitsa), and even Sauvignon Blanc are also worth seeking.

Central Greece: A warmer climate producing softer Xinomavro-dominant blends, including those from Rapsani, a region on the slopes of Mount Olympus. Savatiano offers bolder whites, similar to Chardonnay, and Retsina, a traditional white made with allepo pine tree sap(!).

Southern Greece: Hot climates produce fruity reds, perfumed whites, and rich dessert wines. Nemean Agiorgitiko can be likened to a fruity Cabernet. Mantineia's Moschofilero is like drinking perfume in a glass. Kefalonian Mavrodaphne is typically rich, sweet red wine. Crete is known for their Greek spin on the GSM blend.

Aegean Islands: The most famous wine island is Santorini which is the famous home of Greece’s most important white: Assyrtiko. The other islands have many rare finds. In Lemnos, an herbaceous red called Limnio is thought to have been mentioned in Aristotle's writings.

“Sav-ah-tee-anno” For the longest time Savatiano was used to make bulk wine. Only recently, select producers have taken special care with Savatiano to create produce rich, oak-aged white wines with a creaminess and texture like French Chardonnay.

“Mala-goo-zya” A richer style of white with more fruit and oiliness in a style similar to French Viognier. The grape was single-handedly saved from extinction by the winery, Ktima Gerovassiliou in Northern Greece. (The word “ktima” means “winery”) It now grows in Northern and Central Greece.

“Mosh-co-fill-air-oh” is a delightfully zesty, aromatic white wine that originated in Mantineia in central Peloponnese. Wines range in style from still to sparkling and from lean, floral and dry to richer, nuttier, oak-aged wines that age for 10 or more years.

“Ah-your-yee-tee-ko” Generous, fruity reds and rosés that are often likened to Merlot. Agiorgtiko is Greece’s most planted red and famous from the region of Nemea in Peloponnese where the best wines are said to grow in the hills close to the commune of Koutsi.

“Keh-see-no-mav-roh” Xinomavro is being hailed as “The Barolo of Greece” where it grows in the regions Naoussa and Amyndeo. It can taste strikingly similar to Nebbiolo with its floral aromasl, high acidity and tannin. Xinomavro is a great choice for new wine collectors.

On the slopes of Mount Olympus, the region of Rapsani grows several red grapes including Xinomavro, Krasato, and Stavroto on schist-dominant soils. Wines offer rich red fruit, tomato, and spice flavors with tannins that build slowly on the palate.

The most southerly island of Greece has one of the warmest and mildest climates for grape growing. The native grapes of Kotsifali and Mandilaria are often blended together with Syrah for a bold, fruit-forward red that has a soft, friendly finish.

“Mav-roh-daf-nee” is most often used in as Mavrodaphne of Patras, a late-harvest, sweet red wine that tastes of black raisins and Hershey’s Kisses. More recently however, a few producers now make intense, full-bodied dry reds that are reminiscent of Syrah.

A sun-dried sweet wine from Santorini that looks like a red but is made with white grapes (Assyrtiko, Athiri, and Aidani). Wines have high volatile acidity which will burn your nose if you sniff to strongly! Vinsanto is a haunting balance of bitter and sweet.

The island of Samos is thought to be where Muscat Blanc originated! On Samos many styles are made from dry to sweet. One of the traditionally popular styles is a mistelle (a blend of fresh Muscat juice and Muscat grappa–a spirit) called Vin Doux.

With a reputation for being a value Italian wine, it’s easy to overlook Xinomavro, but there’s complexity and power in this week’s tasting.

This guide will give you a lay of the land and point out 12 Greek wines you should be sipping.

3 Greek white wine varieties that are perfect for beaches, picnics and anywhere you might arrive at on a bicycle or in a canoe. These light-bodied white wines each offer their own individual character.

Dionysus, son of Zeus, is the Greek god of wine. Discover what the wine was like in ancient Greece in this fascinating glance in history.